Smile in the crosswalk at Spokane airport: To the beautiful tall man in the suit who flashed me his pearly whites... your smile was easily the best part of my day!

Stoneridge resort laundry center cutie: I was headed downstairs with my parents and 3 daughters when you jumped in the elevator at the last second. We only had a brief conversation in the laundry room while getting fresh towels but I thought about it and your beautiful smile the rest of the weekend. I really hated having to rush away due to time restraints to get to Silverwood, I hope you had terrific weekend and I hope to see you again some day!

The hottest subcontinent: India, your smile and dance moves cause me involuntary physiological reactions. I'm sorry about the holes in the fabric getting stretched out on my account, my bad. Let me make it up to you, I'll buy you coffee sometime. I'm off work every day after 3 P.M., you name the time and place.

Jeff at value village. June 20th at value village on Boone, you tried to make convo but I was distracted by my kiddos and had to leave the store in a rush. You gave my sister your number to give me, but it never made it to me.

Margaritas & Smiles: I saw you at Rincon Tapatio on Hamilton last Tuesday. I made fun of your drink upsizing and we learned all about a new Caribbean country after watching soccer playing in the background. You had the best smile. Margaritas on me next time?

Wizarding Walk: I saw you walking down Garland on Sunday night, backlit by the glowing signs. You saved my character on Wizards Unite multiple times. I was wearing the No Doubt T-shirt and attempting unsuccessfully to level up. That's such a great area to play. Maybe I will see you there again, soon?

Second Hand hottie: Dear downtown Value Village cashier: I see you from time to time and want to invite you to coffee but I'm too shy and you're too cute. We smiled at each other in the aisle last weekend but once again I lost my nerve. I'll say it from the safe distance of this paper: Let's get together!

Dear fellow burger flippers: Specifically the ones at Jack in the Box, downtown. I rolled in on Thursday night immediately after you put out an enormous UberEats order, and man oh man. You guys looked like you got your asses kicked. I know, because I too brave huge tickets, followed by a trickle of "Oh god, please stop, already!" orders. (As a restaurant cook, but still up to my elbows in grease and growing impatience.) But you guys were still pleasant, and joked with each other while the food cooked. It was nice to see. And I want you to know that I also see you. I can see you guys do your best in a job that could be worlds better. And everyone wants to be an elitist punk about "burger flippers," but damn if they don't want burger flavored grease sludge at 2 am. Don't let the monstrosity that is delivery fast food get you down. And just know you're appreciated. See you in the trenches.

I HOPE TO SEE YOU THERE: Thank you Denny's of Coeur d'Alene for the best hamburger of my life. I've never seen such perfection: from the patty, to the lettuce, from the mustard to the catsup: I felt like a V.I.P. in every sense of that word. This isn't important, but I will tell you anyway... I served my country, and with a man as powerful, perfect and as elegant as President Donald Trump, quite frankly... the world served me. Lord knows what goes on to make bottles, food, plates, napkins... perfect carpet, just love upon love which all translated, and will translate for you, into the perfect tasting, mind-shattering level 10 hamburger. You may think, "should I put such a feast before my eyes?" Should I bring in some Fats Domino to find that thrill, on I-90 hill... the moon stands still, your dreams, the fresh melodies... the perfect service [thanks Maddox] and eat and eat. Love, dreams, modeling, CT, Yale, love, Denny's, sex, drama... laughter, the times, the freedom... and all with the purchase of one cheeseburger w/ Hellmann's mayo. The thing is: don't wait until a person of faith makes you feel guilty about global warming, or what-not. I'll just say, before this turns into a ramble: for generations Coeur d'Alene Denny's has been making perfect people smile... at family gatherings, backyard BBQ's (carry-out = SUPER fast) or, at the ballpark... and so, in conclusion, where there's happy it has to be Denny's. P.S. Get out of my way everyone, that's why I want another one for.

HOOPFEST Inclusion: I love Hoopfest in Spokane almost as much as watching the Zag's play, and Sunday, watching Latino, Native and other ethnic teenagers play "3 man" basketball gave me an uplifting high. So that is another element of Hoopfest that should be applauded!

Random (Mis)acts of Kindness: To the driver who stopped in the middle of the road during evening rush hour at the convoluted Francis/Driscoll/Assembly/9 Mile interchange: Cheers for your kind heart, attempting to let me and my spouse, cycling with our children in bike trailers, cross in front of you. But Jeers for your all-too-common mistake of treating cyclists on the road as pedestrians. It puts people at risk and creates difficulty for everyone involved. The moment you violate traffic law, the whole situation becomes inherently unpredictable. Will you also suddenly keep going? Will other cars zoom around you? Rear-end you? The cyclist can't know how anyone will react, so it's still not safe to go. I'm relieved you weren't hit by the car behind you that never expected you to stop for no reason in the middle of a four-lane with no crosswalk. Which reminds me: I yelled to you, "There's no crosswalk!" but that's not the point. We weren't even trying to "cross the road." We were *using* the road. It's not like we were standing by the curb, waiting to walk. We were in the middle of traffic, cars behind us, waiting our turn. You know, like a vehicle. Treat us like one. It's state law for a reason.

Spokane Police Department: "Thanks." For the help and justice being served with the arson of my vehicle. I'm sooo glad I left it on the street for further investigation, so you can tow it because it was an unidentified, unmoved, nuisance car on the street. Even though I was told not to pick up any glass, not to clean up the street and further investigation would occur. Not until the very same time the fire marshall comes out do you have it towed because of the same reasons. How coincidental. Thank you for not looking into the people that did it. Thank you for doing me any justice at all and covering up what should have been a very violent crime. Thank you for not doing your job and being a typical street gang only happy helping violence, but what happens when I retaliate myself? I bet I end up in jail. Money talks doesn't it? This isn't over. ♦ 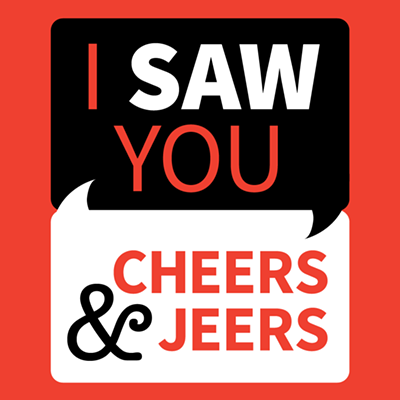 More »
More I Saw You
All Culture