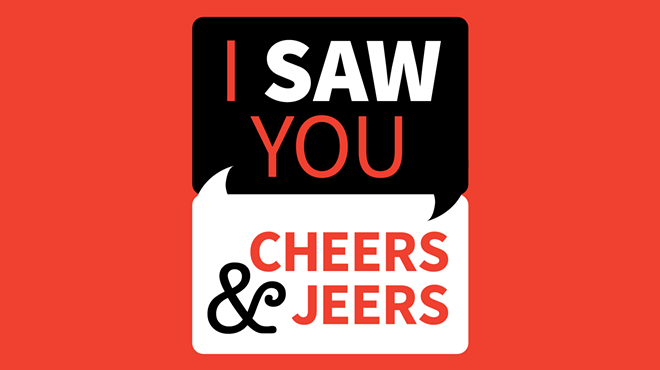 Cute biker boy: Handsome, tall, blonde/brown haired dude with old man/hipster glasses. You ride a red fixed gear bike with black rims and your frame is covered with stickers. I'm in love. Let's rob a bank, get away on our bikes, and start a new life together in South America. You are HOT!

Safeway Smiles: I saw you at the Hillyard Safeway on Saturday. You looked fantastic in gray. Your sense of humor had me giggling. I'd love to get lunch with you sometime soon.

So Brave! Cheers to Nadine Woodward for so bravely attending the Our Town Gala in Riverfront Park on 9/13. You courageously showed up in downtown Spokane despite all the drug-addicted crazies that you see around every corner of our fair city!

Moving it along nicely! To the girls at the Spokane Valley Costco exit door. Being on a busy payday weekend, you didn't let that phase you. You kept the line moving with smiles on your faces, when there was a distraction you just blew it off! I'm impressed! There should be more people like you! Way to go Charlie and Katie!!

CHEERS TO THE LITTLE BIG ONES!!! ...to the Lillies that rise to meet the rain, to the rivers that flow with the music of legends, to the bravin' the STRONG, the Journey is on...Walk in love and harmony... ALWAYS (: (...'TILL WE'RE 'OLE-SUN!!!) - Caseopea

Weak Sauce: If you make someone a job offer and rescind the offer at the last minute, it's pretty telling of a lack of ethics and professionalism. Never in all my years in the service industry would I think to do that. It's shameful to do that to a person just trying to get back on their feet. You've lost me as a great potential employee and forever as a customer. If this is how you operate, I can only imagine how you treat your existing employees. Word of mouth travels fast in this industry and some voices carry weight.

Jeers to the culture of America: The culture that places an angry man's right to have access to military grade weaponry above everyone else's right to go to an outdoor music event, shopping center, work and school without being shot and killed. "Guns don't kill people, people kill people." Yeah, I know, but do you notice how many people die from gunshot wounds at major sporting events? Not many, because security at baseball parks and football stadiums is so tight that no one packing a handgun, shotgun, AK-47 assault rifle makes it in. If ever there was an environment roiling with heated emotion and irrational thinking, it is a sporting event. Maybe that's it, America: The Game. Exciting, Bloody, High-Impact! Get It Now! Massacre American Style Part I and II, No One Gets Out Alive! Yes, it's the culture stupid. Canada is at least as well armed as we are, but their rates of antisocial mass shootings are far outpaced by our weekly assassinations of total strangers. I was a child in the '70s, we talked about guns and killing like it was cool. None of us actually had guns. In the '50s, kids played Cowboys and Indians and Cops and Robbers, how many mass shootings happened between 1950 and 1980? No idea, but I bet people of those decades couldn't fathom an America where hundreds of everyday Americans lose their lives to gun violence at rates higher than the fictionalized killings oozing across their television screens. Solution? An utterly unimaginable sea change in America that sees willing surrender of firearms, gun laws with teeth, intensive mental health treatment for men on the edge, and a culture that values masculinity outside of its too close relationship to violence. Best hope: we "grow out" of this obsession/fascination with gun violence and random killing of our citizens. Is it possible? Of course, it only seems like it's been going on forever. 1979, it never once crossed my mind that I could be shot and killed at school. Won't it be nice when kids, adults, everyone can step outside and not have to think about hiding places, how fast they can run, who might be angry, arrogant enough to kill total strangers that day.

Skateboarders: Again, this is a public safety issue. One late night as I exited a front door at River Park Square, after a movie, a tall man on a skateboard almost hit me. He was going at a high rate of speed on the sidewalk. He knows better, yet he continues his game of public joyride and intimidation. Others' injuries should never be the expense of his fleeting "happiness." Stop indiscriminate public skateboarding

Un-break My Heart: Everynight I drench my pillow in tears because I miss you so much. You left me for another woman and my heart is broken. You have banned me from your life but I am still madly in love with you. I wrote songs about you that I wish you could hear. I told you there will never be another woman who loves you as much as me. It's true you know. Un-break my heart, say you love me again, undo this hurt that you caused when you walked out the door and walked out of my life. Un-cry these tears, I've cried so many nights.

Build a Bridge and Get Over It: Jeers to Mayor Condon for endlessly gloating at his Our Town Gala about how he overcame a 35 point primary deficit to become mayor eight years ago. You came off as incredibly childish, or maybe just a little bit drunk. Perhaps it was some of both. ♦