The world of figure skating comes to Spokane this weekend, and local skaters and their coaches are ready

The whirring and slicing

of their skates nearly drowns out the celebratory music wailing through the arena. Yet for all the noise their blades make, the six bun-headed teens gracefully glide along the ice, expertly spinning into the middle of the rink. The rest of the 41 girls and one boy eventually join in the team exhibition routine — a five-minute endurance test set to "I Believe," the unifying theme song from the Vancouver Winter Olympics. They quickly skate into three circles, representing the three continents participating in this weekend's Team Challenge Cup at the Spokane Arena, and then out into more complex formations.

The group, ages 6 to 17, mostly consists of three clubs from the surrounding area — the Lilac City Figure Skating Club, Spokane Figure Skating Club and Inland Northwest Figure Skating Club. Last Sunday, they've gathered at Coeur d'Alene's Frontier Ice Arena for their final group rehearsal before the international competition. Big skating stars like Gracie Gold and Kristi Yamaguchi will be in Spokane soon, and this Sunday, this amateur crew will perform before the Cup's final performance round at 3 pm.

While the spandex-clad skaters keep warm zooming around in this near-freezing space, the coaches must dress in parkas and extra layers. Parents and younger siblings have it best, watching the action from the heated waiting room.

Maureen "Moe" Herr, main choreographer for this project and skating director for the Spokane Figure Skating Club, barks out instructions to the crew, telling them to watch one another and work as one.

"I consider it voice projection," Herr later says, once the skaters are done for the afternoon. "But yes, I'm quite good at being loud."

For the choreography, she came in with a shell of an idea, she says, but adjusted to the skills the kids were capable of. Some of the performers have only been learning for a year, while others are skating at a national level.

"The kids have pulled this together, though," says Herr, who's been with the club since January. "I wish we could do this more often. I think we're finally beginning to get comfortable with one another." 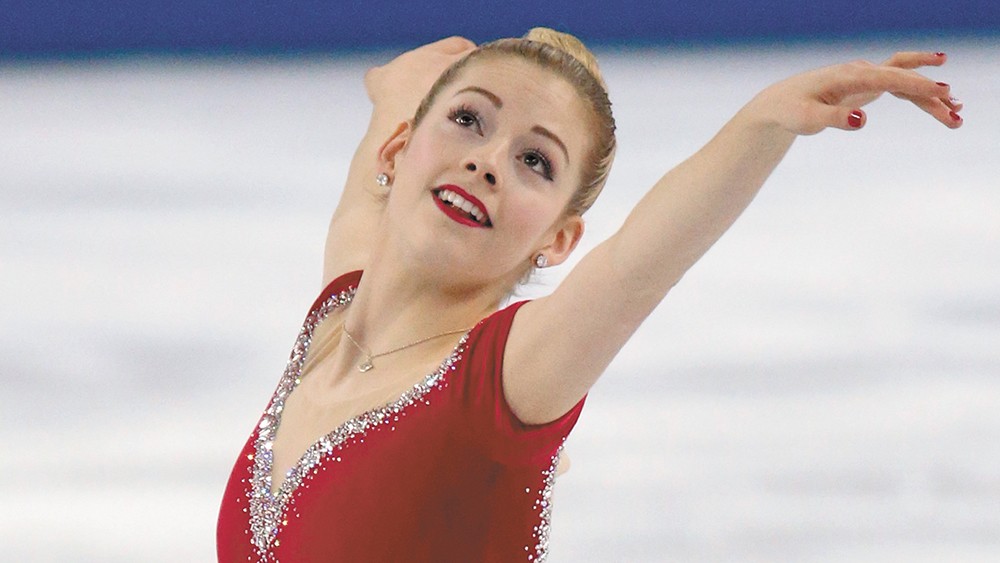 The clubs have previously worked together twice in the past decade for exhibition numbers when Spokane hosted the U.S. Figure Skating Championships in 2010, and some of the kids will be part of this year's sweeping crew, which gathers the flowers and teddy bears thrown to the ice after each competition routine.

Herr fondly recalls sweeping for various competitions held in Lake Placid, New York, where she learned to skate at age 2. "This is something they'll remember forever," she says.

Tucked away right off Seltice Way, the Frontier Ice Arena is the home of the Spokane Figure Skating Club, an 80-year-old group that's been rebuilding its program since 2013. Snow plunged through the club's roof in 2008, leaving it without a home for five years.

But the club has experienced pockets of growth, often connected with international events. Right after the Sochi Winter Olympics two years ago, the club saw a spike in interest in the beginner class.

"Normally you'll see about 20 to 40 kids learning to skate during those six-week sessions," Wiles says. "But we had 100 come out right after the Olympics."

Wiles says he's hoping for another surge following this upcoming event. For all of the glamour and memories created during the big competitions, figure skating is expensive.

"I always tell my daughter, 'You'll have to pay for college on your own,'" James says. "I'm using that money to pay for skating."

After today's rehearsal, the skaters each get their picture taken for official ID badges they'll use come Sunday. Many of the skaters can't wait to catch a glimpse of the decorated athletes they look up to, but others are more upfront.

"I'm excited that I get to skate on TV," says Herr's 6-year-old daughter Morgan.

"Yes, Morgan's more of a swimmer than skater," says Herr. "But this is something she didn't want to miss out on." ♦

This weekend, the Lilac City hosts the KOSÉ Team Challenge Cup, the world's first-ever team-based figure skating championship. Divided into three teams, 42 figure skaters from North America, Europe and Asia will bring world-class talent and impeccable entertainment to the Spokane Arena. The teams are scored on an aggregate system, which combines the scores of pairs, free skate and singles free skate. The team with the highest score in these categories will be crowned the Challenge Cup champion.

Since winning Olympic gold in 2006, Arakawa still skates, commentates for Japanese television and serves as a member of the Japan Figure Skating Federation.

After winning gold at the 1992 Olympics, Yamaguchi has gone on to write books, have a family, and win season six of Dancing with the Stars.

Team members to watch: Gracie Gold may have our hearts, but America's Ashley Wagner is on fire, placing second at this year's World Championships. Canadian pair Eric Radford and Meagan Duhamel also offer a lot to the team as 2015 and 2016 world champions.

Britain's two-time Olympic ice dancing medalist still works as a coach and choreographer. He also tours the United Kingdom with his show "Dancing on Ice."

Team members to watch: Over the past couple of years, French ice-dancing pair Gabriella Papadakis and Guillaume Cizeron have proven they're the ones to beat. Russian phenom Evgenia Medvedeva, just 16, is the current women's world champion.