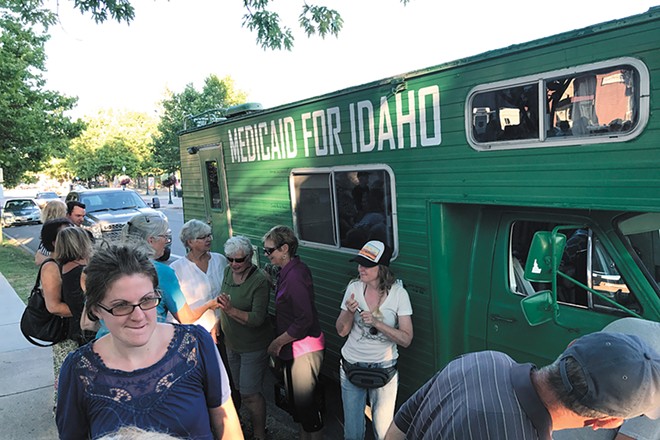 Emily Strizich photo
Bryn Ballenger, one of the 62,000 Idahoans stuck in the Medicaid gap (in the center with the trucker hat), attends a Medicaid for All kickoff event in Sandpoint.


In November, voters approved Proposition 2 by more than 60 percent, signing off on Medicaid expansion in the state, which opted out of the expansion when the Affordable Care Act first took effect.

The measure is intended to close a health care gap for more than 60,000 low-income Idahoans who right now actually make too little money to qualify for subsidies, but too much to qualify for pre-expansion Medicaid.

Brent Regan, a Kootenai County conservative and chairman of the libertarian IFF, is plaintiff in the case against Idaho Secretary of State Lawerence Denney. He says the measure could put Idaho at financial risk if the federal government ever decides to reduce its reimbursement levels for Medicaid and Idaho doesn't like the changes.

"Once you're signed up for the expansion, it's like Hotel California, you can't leave," Regan says. "Unless we do what the federal government says, not only do we lose funding for the expansion but for all Medicaid funding."

The challenge also questions the use of the phrase "take all actions necessary" in reference to implementing the measure, claiming it potentially unconstitutionally hands too much power to the Idaho Department of Health and Welfare. The phrase is used in other Idaho statutes.

"Proposition 2 has some very broad and sweeping language in it," Regan says. "It directs the executive to do certain things basically by any means necessary."