Idaho Gov. Little vetoes bill that would have allowed rehab program to treat kids without license 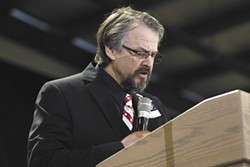 The rehab center, Good Samaritan, is run by Idaho Rep. Tim Remington, who was appointed to the House of Representatives by Little in January.

Last month, Remington told the Inlander that he asked for the exemption because it would let him keep prices down for families. Getting certified, he said, would force him to pay more licensed therapists. But Democrats and children advocacy groups strongly opposed the bill, arguing there needs to be oversight and accountability for facilities housing vulnerable youth.

The bill passed the Senate and the House. But in vetoing the bill, Little said the bill didn't have enough protections preventing harm of kids. In a statement, Idaho House and Senate Democrats supported Little's move.

"We are grateful that the Governor chose to veto HB 340 — this bill would have put Idaho children in danger of abuse during their most vulnerable moments of recovery," they say.

Remington, meanwhile, is still holding church services in Coeur d'Alene, where he is a pastor of the Altar Church, despite a stay-at-home order from Little.