NEWS: This week’s paper is OUT. Our cover: “Dying Inside,” a deep dive into the deaths at the Spokane County Jail and what can be done to prevent them. Plus, a ton of other good stuff (as usual).

TECH: A new gene-editing method could be what doctors need to treat cancer and infectious diseases. More details on the development by the New York Times, here. 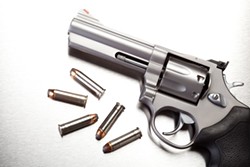 House Republicans rejected allocating millions of dollars to fund gun violence research for the Center for Disease Control and Prevention.

Sound familiar? The rejected proposal comes after a bipartisan agreement earlier in the year that agreed that the CDC should be able to research gun violence. However, a clause enacted by the Dickey amendment (1996) prevents that from happening. (Politico)

Car chases and gun fights
Three candidates are vying to become Seattle’s next police chief. At a forum for community activists and clergy members, the candidates seemed to focus their discussion on community policing. Interim Police Chief Carmen Best said that “police work is no longer about car chases and gunfights.”

Bye bye bots
Twitter announced yesterday that it would be cracking down on fake accounts. Ultimately, the average user might lose a few followers... unless you're the type to pay for them.