Gunhild Swanson's life on the run 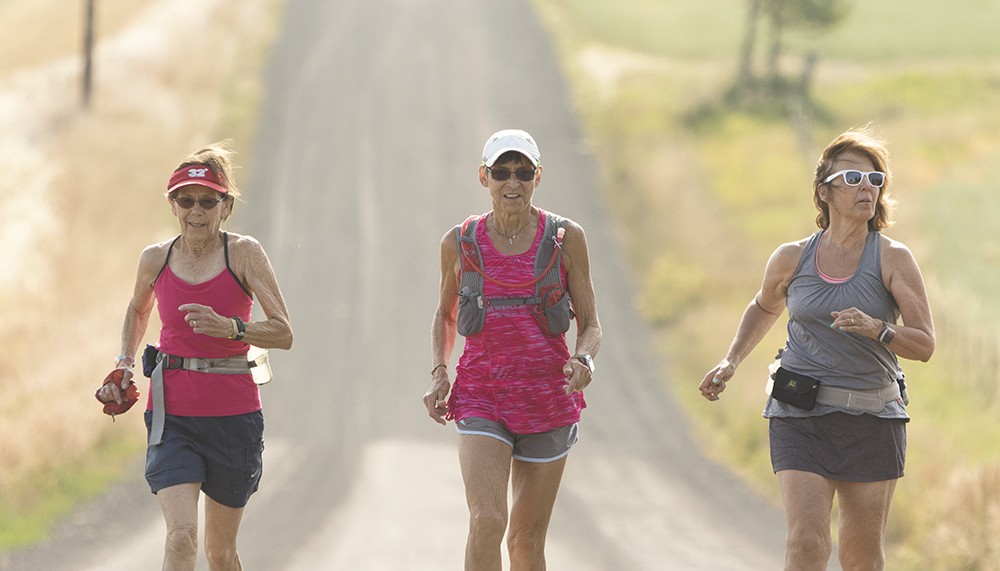 It's barely after 9 on a Sunday morning,

and somewhere along a gravel road on the Moran Prairie, southeast of Spokane, a group of five women are taking a food break.

As food goes, it's not much for presentation or taste. A pack of thick, oozy gel, with a consistency something like cake frosting. Long distance runners know them all too well.

Today, the gel helps as a mid-run boost to cover an easy 14 miles before 10 am. Swanson's distaste for the gels came just one week earlier, when it wasn't one gel over 14 miles, but many over 100 miles she'd run in 30 hours.

The world now knows Gunhild Swanson's name because of that six seconds to spare under 30 hours. That's the cutoff time for racers to finish the Western States Endurance Run, which by any measure is among the most grueling and elite endurance races in the country. When she finished at just under the cutoff, video of the dramatic ending set off Facebook shares and feel-good story alarms all over the globe. What is normally a relatively obscure race in California became an international news event viewed millions of times online.

Swanson, who lives in Spokane Valley, was the last Western States finisher this year, but she achieved far more recognition than any winner ever does. And in so doing she became the oldest woman ever to finish — at age 70.

Competing in an ultramarathon like Western States isn't a solitary undertaking. Along the course, Swanson was aided by a support crew and three pacers — her son, grandson and a friend — who ran alongside her at different stages.

But before any race comes the training. And last weekend, after her record-setting finish, Swanson rejoined her usual running crew — a group ranging in age from 62 to 78.

"I'm the baby, and I'm the slowest," says Mary Ann Clute, 62. Even so, she's completed at least 20 ultramarathons of 50 miles or more — and that's on just one course, the Le Grizz ultramarathon in Montana.

Consider the other members of Swanson's running crew:

• Sylvia Quinn, 78, who ran her first Le Grizz "by accident" when she was pacing for a friend and ending up running the entire 50 miles. Her recent finish of 4:19 in the Coeur d'Alene Marathon is the yet-to-be-confirmed world record for a female her age.

• Piper Peterson, 68, who only started running nine years ago, but in that time has run at least 40 marathons — from Singapore to Thailand to Ireland to Venice.

They call themselves the Dirty Mothers, and it's obvious that they're more than a group of friends who enjoy running together. They support each other. And, they say, what's said on the trail stays on the trail — except when a nosy journalist tags along for a few miles.

When someone suggests that Swanson get a tattoo on her rear end to commemorate her Western States finish, she responds without blinking.

"My butt is unblemished, thank you." And then remembering the outsider jotting down notes in their midst: "You'll have to take my word on that."

They banter and joke, like any group of friends would, with the backdrop of running in a single race more miles than some people walk in a year.

No one would dispute that.

At her house later that day, Swanson stands in a room that serves as both trophy case and living history museum. Hundreds of race medals hang from wall-to-wall racks that bow in the middle from the weight. Dozens of trophies and plaques sit in every square inch of usable space, some still in boxes.

After so many races over nearly 40 years of running, it's hard to keep track of the accolades. They blend together: Bloomsday 2015, top female finisher in her age group. 2014, too. Same for the 2005 Boston Marathon. Three times, the first-place overall female finisher in the Coeur d'Alene Marathon. And on and on.

The conversation turns to a harder topic — the recognition that her racing career is, in fact, a race against time. What will she do when she can't run anymore? Will she lose that identity she's been so entwined with for so long?

Indeed, her late husband Jack faced that reality as he battled leukemia. The two had met doing what they both loved: running. Their years together were spent running races and watching kids and grandkids do the same.

"I wish I still had Jack. I miss him every day," she reflects, noting that he was, without doubt, her biggest fan. If he didn't want to do a race, he would still support her, saying, "I'll hold your hat," as he did when she ran her first Western States race 10 years ago.

There's one empty spot among all those medals of hers — one where she didn't compete or win her age division or collect any trophies. Even so, you'd suspect it's the event she'll remember most fondly. Bloomsday 2008 was the year she held Jack's hat, pushing him in a wheelchair over the 7.5-mile course, as the leukemia didn't allow him to run or walk.

Jack died a few months later, having finished his final race with Gunhild by his side. ♦