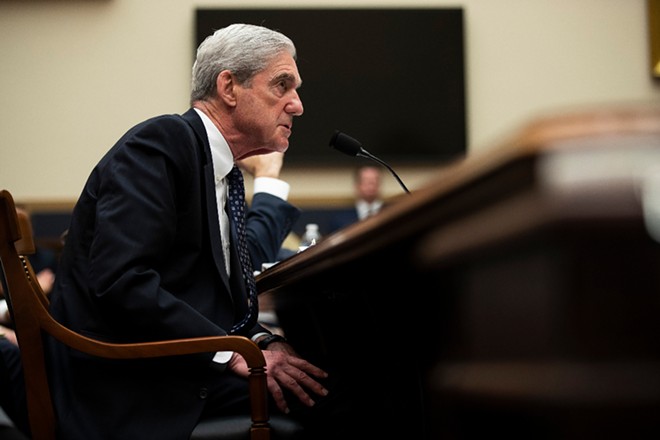 Anna Moneymaker/The New York Times
Robert Mueller, the former special counsel, testifies before the House Intelligence Committee in Washington, July 24, 2019. Impeachment investigators are exploring whether President Donald Trump lied in his written answers to Mueller during the Russia investigation, a lawyer for the House told a federal appeals court on Nov. 18, raising the prospect of bringing an additional basis for a Senate trial over whether to remove Trump.

WASHINGTON — Impeachment investigators are exploring whether President Donald Trump lied in his written answers to Robert Mueller during the Russia investigation, a lawyer for the House told a federal appeals court Monday, raising the prospect of bringing an additional basis for a Senate trial over whether to remove Trump.

The statement came during a hearing in a case over the House’s request for secret grand-jury evidence gathered by Mueller.

Trump refused to testify orally about what he knew and did during the 2016 campaign in relation to Russia’s election interference operation, or his later efforts to impede the special counsel’s inquiry. But he did provide lawyerly written answers to some questions.

On Monday, Douglas Letter, the general counsel for the House, told a federal appeals court panel that impeachment investigators need to see the grand jury evidence — redacted portions of the Mueller report, as well as the underlying testimony transcripts they came from — because Trump may have lied.

“Was the president not truthful in his responses to the Mueller investigation?” Letter said, adding: “I believe the special counsel said the president had been untruthful in some of his answers.”

He was referring to Mueller’s congressional testimony in July. A lawmaker brought up Trump’s written responses and asked whether “his answers showed that he wasn’t always being truthful.” Mueller responded, “I would say generally.”

Both the lawmaker in July and Letter on Monday appeared to be referring to the question of whether Trump lied about his campaign’s advance knowledge of and contacts with WikiLeaks about its possession of hacked Democratic emails and plans to publish them.

Trump wrote that he was “not aware during the campaign of any communications” between “any one I understood to be a representative of WikiLeaks” and people associated with his campaign, including his political adviser Roger Stone, who was convicted at trial last week for lying to congressional investigators about his efforts to reach out to WikiLeaks and his discussions with the campaign.

But the publicly available portions of the Mueller report suggest that evidence exists to the contrary. Several Trump aides testified that they heard Trump discussing coming WikiLeaks releases over the phone. And in October 2016, Steve Bannon, the campaign chairman, wrote in an email that Stone had told the campaign “about potential future releases of damaging material” by WikiLeaks shortly before it began publishing more hacked emails.