Impeachment testimony: 'Trump cares more about the investigation of Biden' 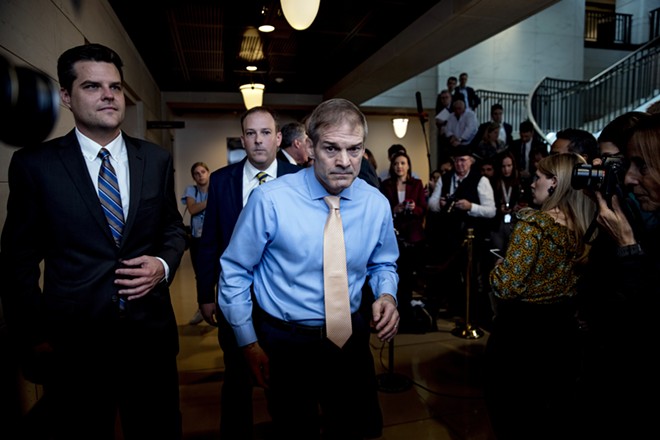 Anna Moneymaker/The New York Times
Rep. Jim Jordan (R-Ohio), center, and other Republicans outside of the secure room where impeachment interviews took place on Capitol Hill on Oct. 8, 2019. House Republicans plan to aggressively defend President Donald Trump during impeachment hearings that begin Wednesday, Nov. 13, 2019, by arguing that his efforts to push a foreign leader to announce investigations into his political rivals were legitimate attempts to root out corruption.
By Michael D. Shear
The New York Times Company

William Taylor, the top U.S. diplomat in Ukraine, testified that he was told that Trump cared more about “investigations of Biden” — former Vice President Joe Biden — than he did about Ukraine. The revelation, as Congress began the third set of presidential impeachment hearings in modern history, placed Trump at the center of what Taylor described in vivid detail as a “highly irregular” effort to place the president’s political interests at the center of U.S. policy toward Ukraine.

The proceedings, the first public impeachment hearing in more than two decades, moved into the public’s direct glare Wednesday — an epic clash between Trump and Democrats that has so far unfolded in private.

Taylor said that a member of his staff overheard a telephone conversation in which the president mentioned “the investigations” to Gordon Sondland, the U.S. ambassador to the European Union, who told him “that the Ukrainians were ready to move forward.” After the call, the aide asked Sondland what the president thought of Ukraine, in Taylor’s telling. The ambassador “responded that President Trump cares more about the investigations of Biden, which Giuliani was pressing for.”

He was referring to Rudy Giuliani, the president’s personal lawyer, who Taylor described as the leader of an “highly irregular” policymaking channel on Ukraine that ran counter to goals of long-standing U.S. policy.

Much of the rest of Taylor’s testimony was consistent with what he told the panel previously, an account that included vivid details of how he discovered that Trump was conditioning “everything” about the U.S. relationship with Ukraine — including needed military aid and a White House meeting for Ukraine’s president — on the country’s willingness to commit publicly to investigations of his political rivals.

George Kent, a senior State Department official who is also testifying, said that he concluded by mid-August that Giuliani’s efforts to pressure President Volodymyr Zelenskiy of Ukraine to open investigations into Trump’s rivals “were now infecting U.S. engagement with Ukraine, leveraging President Zelenskiy’s desire for a White House meeting.”