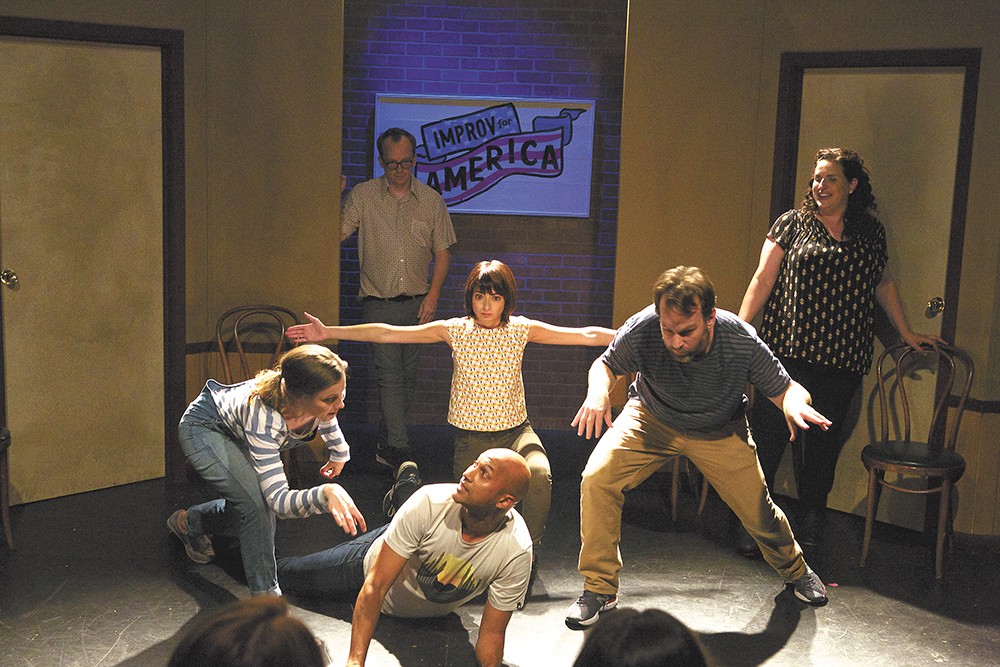 The all-star cast within a cast of Don't Think Twice.

As in his 2012 indie film breakout, Sleepwalk With Me, writer/director Mike Birbiglia mines what he knows:

stand-up comedy. The characters and settings of both films are based on the unknown, workaday comics who hone their craft in the dark, half-empty comedy clubs that dot every major American city.

Although a Three Musketeers-like "all for one, and one for all" attitude is evident in the members of the comedy troupes, Birbiglia also has a keen sense of the roiling resentments and sublimated jealousies that infect the individuals we see in Don't Think Twice. Young, creative sorts may be more susceptible to these insidious and self-deprecating emotions, but Birbiglia's acute perspective will pertain to almost any industry in which a few are chosen to advance and the vast majority are left to wonder, "Why not me?"

The six members of the Commune improvisational troupe all have one another's backs. It's one of the tenets of the improv form they love so dearly (along with "say yes" and "don't think"). The Manhattan group is one of the training grounds from which Weekend Live (a fictional version of Saturday Night Live) is known to pluck new cast members. On a night when talent scouts are known to be in the audience, Jack (Keegan-Michael Key) can't resist showboating with his impeccable Obama imitation, and later he and his girlfriend Sam (Gillian Jacobs), the group's resident couple, receive an invitation to audition for the national show.

The group tellingly hesitates a moment too long before congratulating the pair on the invite, and when Sam makes the cut, the stage is set for the slings and arrows of the unjustly overlooked, as well as the conflicts experienced by the more measurably successful Jack in trying to stay true to his roots and remain friends with his old group. Add to the group's woes that they're being evicted from their longtime performance space to make way for a new Trump edifice. (How timely is that?)

Cameos from Ben Stiller and Lena Dunham, appearing as themselves, lend additional credence to the comedy milieu that the film inhabits. Birbiglia plays a character named Miles who taught improv technique to Jack and now, at the advanced age of 36, is smarting from his own lack of advancement. Sam, on the other hand, doesn't wish to move up the professional ladder, although something about her protests rings hollow.

Although his visual style is relatively flat and expository, filmmaker Birbiglia's penetrating observational skills make Don't Think Twice an exceptional film about both the comedy world and the plight of young professionals who wonder if they've stalled out before even getting into gear. Like the chimera evoked by the Bob Dylan song from which the film takes its name: "It ain't no use to sit and wonder why." ♦

Don't Think Twice is not showing in any theaters in the area.