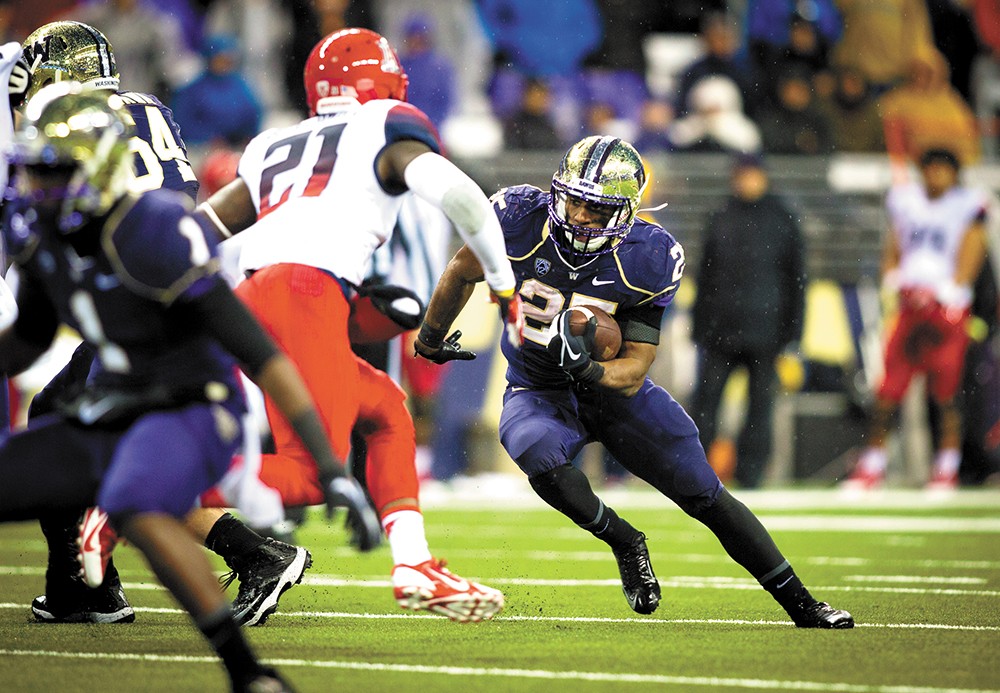 After a stellar career at Gonzaga Prep, Bishop Sankey is taking aim at UW record books.

But in less than three full seasons, the former Gonzaga Prep star has supplanted Steele, achieving in purple everything Washington State fans could have envisioned in crimson.

"We've had success in the ground game," the nation's third-leading rusher understates in a phone interview after a chilly morning practice last week. "We really pride ourselves on running the ball."

Sankey set a Greater Spokane League record, rushing for 4,355 yards as a Bullpup — 359 against Mead in a 2010 game — and was GSL Most Valuable Player and Class 4A all-state as a senior.

In December 2009 he made a verbal commitment to Washington State, offering hope to fans reeling from Paul Wulff's second campaign, a 1-11 debacle capped by a desultory Apple Cup loss. Thirteen months later, he broke Cougar hearts and inspired epithets like "traitor" when he declared his allegiance to the team they despise above all others, the University of Washington.

After 11 games, WSU's anemic rushing attack ranks 123rd — dead last — in the Football Bowl Subdivision at 60 yards per game, totaling 10 touchdowns with two runs of 20 yards or more. Averaging 143 yards, with 17 touchdowns and 19 rushes covering at least 20 yards, Sankey is a finalist for the Doak Walker Award, presented to the nation's top college running back.

Coug fans celebrating the possibility of a bowl game for the first time in a decade can only imagine him as the feature back in Mike Leach's balls-out passing attack and wonder: What if?

Sankey's freshman year was about adjusting. His sophomore effort was the breakthrough. His junior season already is one of the most prolific by any UW running back; at 1,575 rushing yards, Corey Dillon's single-season mark of 1,695 set 17 years ago is well within reach.

"It's offseason preparation, not being satisfied," says Sankey. "There's always room to get better. I've become more of a patient runner — when the hole opens, get through it and get to the next level."

The past three months' highlights include a career-high 241 yards in an emotional rout of Cal, a school-record 40 carries against Arizona, and 208 yards vs. Illinois at Chicago's iconic Soldier Field before 30 family members and friends.

But it's hard to top Oct. 5 at Stanford. Playing before his grandfather Albert — who underwent a corneal transplant two weeks earlier to restore vision in his right eye and witnessed his grandson in action for the first time — he gashed the Pac's best defense for 125 yards and two touchdowns.

"It was a blessing," says Sankey. "He really enjoyed being there, his first time seeing me play. ... I just wish we'd won."

The grounded 21-year-old credits his upbringing — born and raised in Ohio, he followed his father Chris, an Air Force sergeant, to Spokane — with making him who he is: "Growing up in a military family helped me adapt to different situations, taught me that you have to learn to make adjustments. You have to know who you are — it's important to stay close to the people who are closest to you. ... My dad's the biggest influence in my life; he taught me about life."

Bulked up nearly 20 pounds from his G-Prep days, Sankey is a metronome for an inconsistent Husky team.

Soaring up NFL draft boards to the third round, he'd be the earliest-drafted Spokanite since 1992, when Detroit picked kicker Jason Hanson of Mead and WSU in the second round. His toughness, durability, vision, balance, acceleration, blocking and receiving ability and nose for the end zone bode well for the next level.

After rushing for three touchdowns Saturday, tying Kaufman's UW career record of 34, he could be playing his final home game Friday in the Apple Cup.

"I'll have to go over it with my family," says Sankey. "It's not something I'm thinking about right now." ♦