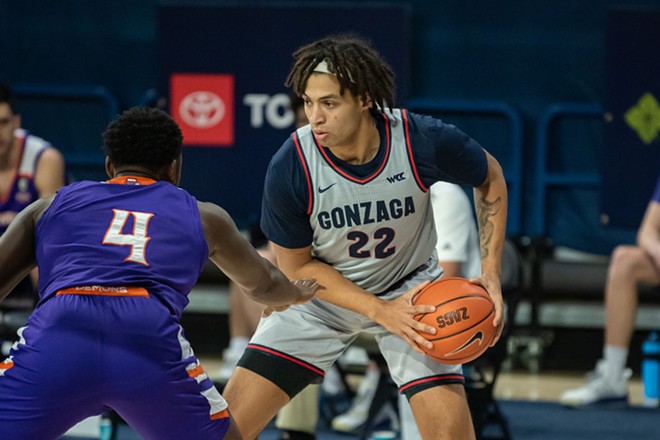 Erick Doxey
Gonzaga Prep grad Anton Watson had a career high against Portland Saturday, one of many Zags to shine in the blowout win.

That was one for the record books.

Gonzaga beat Portland, the worst team in the West Coast Conference, by a score of 116 to 88 Saturday night. The Pilots were no match for the Zags. Gonzaga’s ranked No. 1 in the country and Portland is extending a two-year stretch in which it has won just one league game. It wasn’t supposed to be close. And it wasn’t. But yikes, because it didn’t need to be as lopsided as it was.

The Zags showed just how deep and talented they are on Saturday in the Rose City. Normally a blowout win like this over a WCC opponent will be forgotten about almost as soon as it happens. That won’t be the case with this one, though.

Freshman Julian Strawther scored a career high 12 points in eight minutes. His action on the floor has been largely relegated to garbage time this season. Saturday was no different, but he made the most of it.

Sophomore Anton Watson, a Gonzaga Prep graduate, has held a starting role for the bulk of this season. In Portland he reached double-figures in scoring for the third time this season. He scored a career high 23 points in what was quite possibly his best game as a Zag. Especially on the offensive end.

Two players, a starter and a reserve, registered career highs in scoring. Neither were remotely close to being the biggest story to come out of this weekend for Gonzaga.

That honor goes to Joel Ayayi. The junior shooting guard scored 12 points, grabbed 13 rebounds and dished out 14 assists. Yep, that’s a triple-double. The first in Gonzaga program history. Amazingly, he accomplished that before he missed a single shot. He did so without turning the ball over or committing a single foul.

On one hand Ayayi is the reigning WCC Tournament Most Outstanding Player. On the other, he’s Gonzaga’s what… fourth best player?

Corey Kispert, Jalen Suggs and Drew Timme are all in the hunt for all-America honors. If the season ended today, at least two of them would be there. Maybe all three. But it’s Ayayi who has done something no Zag has ever accomplished prior. He might be this team’s fourth best player, but he’s the one with the individual performance that lands him in the program’s record book.

Some kind of luxury for a team to have. Gonzaga’s fourth best player can do it all, and on a historically unprecedented level.

This isn’t a fluke, either. Ayayi has been closing in on this for a year now. Recently, especially. He recorded back-to-back-to-back double-doubles against Northern Arizona, Dixie State and San Francisco. He hit double-figures in scoring and in rebounding in all three games. It was just the assist category in which he was lacking. That said, he’s a shooting guard. Assists don’t need to be a part of his game.

Against Portland though, he dished out 14 of them. He recorded a triple-double in the game before he recorded a missed shot. And he never once recorded a turnover. That’s absurd.

That’s how good this team is. That’s how loaded this roster is. Gonzaga scored 116 points behind career highs from Watson and Strawther yet the player of the game was Joel Ayayi, who did something no Zag has ever done before. Meanwhile, Timme put up a relatively quiet 26 points to lead all scorers.

It took until the bottom of this column to name the game’s leading scorer. That alone should demonstrate how loaded Gonzaga’s roster is this season. Even so, it doesn’t feel fair. Ayayi did something no Zag before him could ever accomplish. It’s amazing, but honestly it’s just another piece in this team’s climb to greatness. It’s just another part of this embarrassment of riches.