In a self-imposed quarantine? Here are some movies to suit any mood, from the macabre to the escapist

In moments of panic and confusion, a lot of people turn to popular art to assuage our fears. It's scary out there, so let's hunker down and watch a nice romantic comedy!

But then there are those of us who, in moments of panic and confusion, turn to popular art about panic and confusion. As long as the human race has been writing down stories, narratives about death, destruction, violence and mayhem have appealed to the basest instincts of our dumb lizard brains. Is it merely morbid curiosity? A side effect of our own fear of mortality? A means of experiencing the worst-case scenario at arm's length? A weird form of catharsis?

Case in point: As coronavirus continues its circulation, Steven Soderbergh's 2011 thriller Contagion, which exhaustively details the spread of a global pandemic that indiscriminately kills millions, is climbing the iTunes rental charts. It's still sitting pretty in the top 10, edging out newer (and slightly less horrifying) titles like Frozen II and Knives Out. Meanwhile, the 1995 disaster film Outbreak, about a virus transmitted via a rogue capuchin monkey, is listed amongst Netflix's most-streamed titles.

This shouldn't come as a shock: We're weirdly drawn to the possibility of our own demise.

Of course, not everyone is so macabre, and not everyone wants to sit through films as alarmist as Contagion or Outbreak right now. But as we all prepare for a quarantine situation, and as movie theaters around the country are closing, we're gonna need some home entertainment options.

So here are some rental and streaming selections catered to three separate groups of people — those who want to freak themselves out with a good pandemic-themed film, those who crave escapism, and those who want a little of both at the same time.

WANT TO SCARE YOURSELF?

In the early '60s, low-budget legend Roger Corman made a string of campy, garishly-colored films based on Edgar Allan Poe stories and starring Vincent Price. This is arguably the best of the bunch, a gothic mystery about a libertine whose castle serves as refuge for the rich as a plague ravages the nearby peasant villages. Because this is Poe, you just know the tables are about to be turned. For rent on Amazon.

I read Michael Crichton's novel The Andromeda Strain when I was a kid attracted to genre literature that would inevitably freak me out, and, well, it freaked me out. It's about a peculiar virus, seemingly from outer space, that has wiped out an entire desert town, and the scientists attempting to understand and contain it. This film adaptation is clinical in style and told with a Kubrickian emotional distancing, and for all its technological datedness, it's still pretty creepy. For rent on Amazon and YouTube.

Themes of infection and paranoia run throughout this sci-fi puzzle-box, which begins with the discovery of an extraterrestrial warp-zone, locks us away in a military quarantine with a team of soldiers and scientists, then follows them inside as they search for the previous explorers who have vanished. Writer-director Alex Garland exploits both the fear of a body being infested and the disorientation of a world sliding off its axis. Streaming on Amazon Prime.

WANT TO CALM YOURSELF? 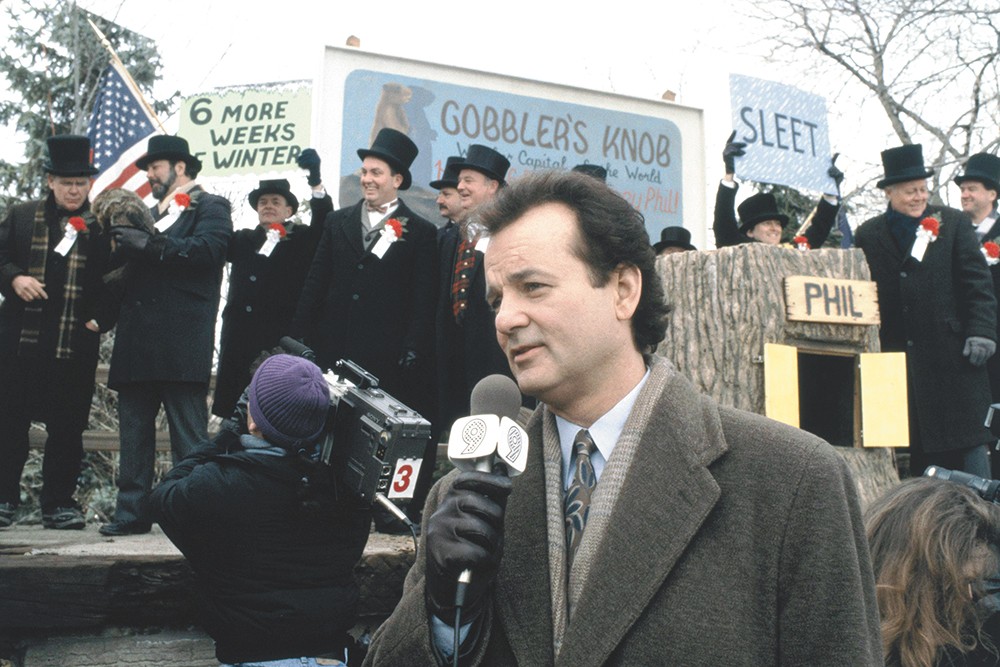 In Groundhog Day, Phil Connors lived through a certain kind of self-quarantine. Except it was funny.

So maybe claustrophobic, biological horror isn't your cup of tea right now. In that case, consider one of the all-time great comfort-food movies: Harold Ramis' classic 1993 comedy starring Bill Murray as a sardonic weatherman who must inexplicably relive the same day over and over and over and over again until he gets it right. If you think about it, his predicament isn't unlike being under government-mandated quarantine for weeks on end. Except, you know, it's funny. Streaming on Netflix.

Don't trust anyone who doesn't believe this is one of the very best concert films ever made. Directed by the late Jonathan Demme, it documents the Talking Heads at the peak of their performative ability, reimagining the rock concert as an art installation with moving parts. From an explosive, aerobic rendition of "Burning Down the House" to frontman David Byrne's iconic solo performance in an oversized suit, it's a burst of good feeling and unbridled energy. Turn it up loud. Streaming on Amazon Prime.

This charming indie flew under the radar a couple years ago, and I often find myself recommending it to anyone who will listen. It stars Regina Hall as the harried manager of a Hooters-style restaurant in suburban Texas, engrossing us in her daily routine as she tries to keep her scantily clad employees safe and happy. An ebullient comedy, a moving character study and a sharp exploration of economic anxiety, all at once. Streaming on Hulu.

WANT A LITTLE BIT OF BOTH?

If we were to make a Venn diagram of those previous two categories, Edgar Wright's ingenious horror-comedy would be right in the middle. His breakout feature stars co-writer Simon Pegg as a heartbroken slacker who hardly even notices the zombie endemic around him, and the film's breakneck pace keeps jokes coming thick and fast. But it actually deals with the violent consequences of an outbreak, and even sneaks in a few emotional moments. Streaming on Hulu with a Starz subscription; for rent on Amazon Prime and YouTube.

A decade after his watershed film Night of the Living Dead, George A. Romero mixed bloody, flesh-ripping horror and dark satire in this story of survivors locked in an abandoned shopping mall that's overrun by the undead. For my money, this is the greatest zombie film ever made, and yet it has always been difficult to track down: It's not streaming anywhere, and a DVD copy will cost you a pretty penny. Luckily, several different versions of the film (it was re-edited several times during its initial release) have been uploaded to YouTube; I'd recommend the 127-minute theatrical cut.

One of the damnedest films you're likely to see, a bizarre descent into isolation and madness set in an abandoned castle-turned-asylum, where war veterans in various stages of psychosis coexist in a strange social experiment. Adapting his own novel, William Peter Blatty (The Exorcist) blends broad comedy ala Catch-22 with hysterical violence, existential dread and religious skepticism. And while there's no pandemic per se, the strange energy seems almost contagious. Streaming on Amazon Prime. ♦

Speaking of AT HOME , Streaming