In Defense of Refugees

In the aftermath of the presidential election, local residents seek ways to love and support their refugee friends

Young Kwak
Aytan Faris, a refugee from Syria, is grateful for the support she's found in Spokane.

Aytan Faris' eyes grow red, and she clutches her hands to her mouth

as her husband Khalil Omar talks about the mortars that shelled Damascus a few years ago. Faris talks about how the shells killed her sister-in-law and left her niece with shrapnel in her legs.

Omar speaks of how they fled Damascus to a smaller town in northern Syria. He talks about how hard it was to take care of their children — three of their four kids are deaf — amid civil war.

"We did not have work," Omar says. "It was very difficult to survive there. There isn't any kind of medical treatment."

Their native language is Kurdish, but they speak Arabic to the translator.

Omar talks about how his family legally moved to Turkey, where he spent two years working 12 hours a day at a hotel laundry, in order to barely afford two moldy bedrooms for their family of six.

Then, finally, their fortunes changed: They were among the thousands of Syrian refugees the United States took in this year.

They arrived in Spokane in May, the same month that Donald Trump rallied enough delegates to win the Republican nomination.

Trump, of course, has ridden — and even led — a wave of anti-refugee sentiment. Where his opponent in the general election had promised to dramatically expand the number of Syrian refugees taken in, Trump proclaimed that the influx of Syrian refugees was a "great Trojan horse" for terrorist attacks. He blamed refugees, sometimes falsely and recklessly, for violence. He has proposed banning Muslims from entering the United States and suspending immigration from "terror prone" regions.

And at one New Hampshire rally, he'd proclaimed, "I'm putting the people on notice that are coming here from Syria as part of a mass migration, that if I win, they are going back."

And then, last month, Trump got elected.

In Spokane, Trump's victory sent a shock wave across refugee communities and the organizations who serve them. In the weeks since, Spokane residents have been searching for ways — both large and small — to stand by refugees, including their friends and neighbors, to show them that they will continue loving them, supporting them and defending them. 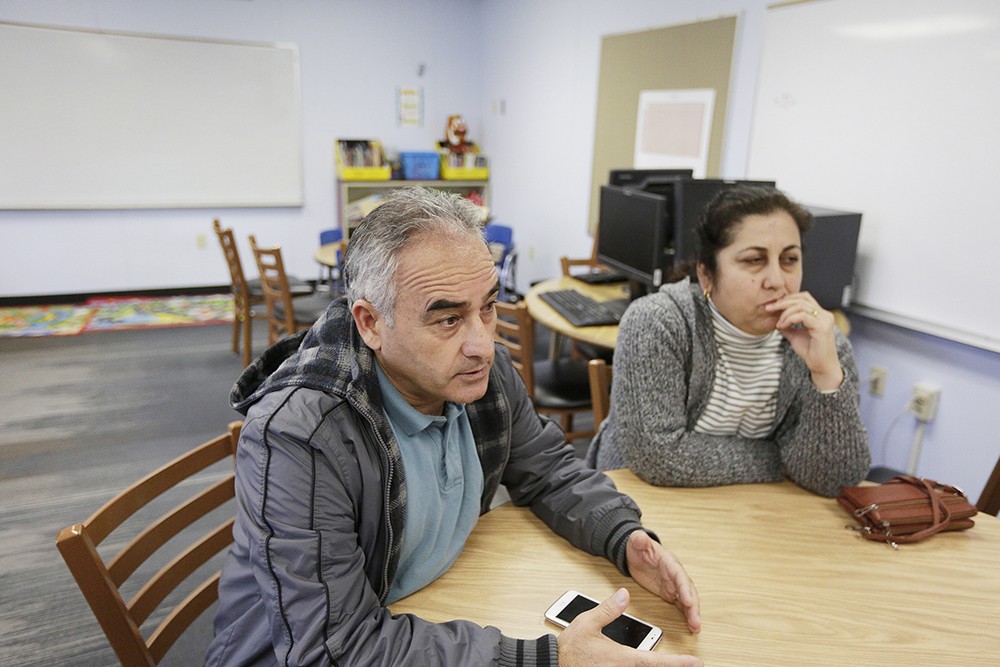 Luisa Orellana arrived to teach at the Adult Education Center and Ferris High School on the morning after the election, to find her refugee students waiting outside the door for her. They were terrified.

"Students were scared. Some were crying," Orellana says. "They were worried they would have to go back, because they had no home."

She tells them she's been there, that she's known how it feels to be afraid. She'd fled the civil war in El Salvador with her family back in the 1980s, crossing the border illegally. A network of Christian churches in Spokane protected her until a priest helped her get political asylum.

And now, she makes her students a promise.

"We will not let anything happen to you," she vows. "I would honestly give my life for my students if it came to it."

These moments occurred in language schools and refugee advocacy organizations all across the region. Omar says that the English instructors at the Adult Education Center pulled him together with the other refugee students on the morning after the election.

"They ask for this meeting so that they can assure us," Omar says. He hasn't been following the news closely, and says he doesn't know much about Trump, but others do. Refugee students who are more skilled in English are able to answer questions for those who aren't.

There are points they hit on: Nothing is going to change immediately. There are agencies here that can protect them. They're all in this together. Refugees, after all, have learned to be resilient.

"A lot of people seem to calm down when they hear from their colleagues and classmates," Meuer says. "That unity is really helping."

Refugee resettlement agency World Relief has seen an increase locally in donations and offers to help gather supplies for refugees. Anna Bondarenko, director of Refugee Connections, an advocacy group, says they've seen a surge in new Facebook followers after the election. People have been calling, asking how they can help.

Already, ideas are cropping up. The Spokane Regional ESOL Consortium, a group of teachers of English for speakers of another language, met the week after the election to brainstorm. This Saturday, they're holding a fair at Rogers High School, aimed at connecting refugees and other non-native English speakers with the resources they need. Meuer says that they've invited some local legal experts to put together a "civil-rights road show" aimed at informing refugees and other immigrants of their rights.

Yet Bondarenko says that activists know there are some questions they can't answer. Trump's policy statements have oscillated wildly, but it looks like, at a minimum, the hope refugees had that their family members still in war-torn countries would someday be able to join them has been dashed. She describes a sort of foggy hopelessness obscuring the future.

"I think we're all just very confused. We're holding our breath and we just don't know," Bondarenko says. "The uncertainty, that just kills you. That's where a lot of refugees are."

When Omar and Faris talk about America, they don't say that they're worried about Donald Trump. Instead, they emphasize how fortunate they feel. They miss their family members still in Syria — the borders are closed, they say, so they don't think they're going to get out.

But in Spokane, they've found generosity. They've been able to get new hearing aids for their kids. They have a place of their own — they live in the apartment below a Nepalese refugee family. It's safe here.

"We don't want much, other than to live safely and to have our children in a safe place," Omar says. "We're really happy."

But Areej, who is translating our conversation, says that during her work with the Family Registration and Orientation Center, many refugees have expressed deep fears to her that they wouldn't express publicly. Worried about her safety, and the safety of her family back in Iraq, Areej requested that her last name not be used.

Areej says many people like her, who've lived under dictators, have learned to be cautious with their words. They don't speak frankly about politics in public.

After Trump's election, she says, Muslim women like her have been considering removing their religious headscarves — the hijab — because it will make them less identifiable as Muslim. But that's a concession Areej says she's unwilling to make, no matter the consequences.

"I'm not going to change because of hatred that is spreading," Areej says.

She says her friends, on both sides of the political spectrum, have sent her texts expressing their support. One friend, Trish Stauffer, went even further.

"I am a church-going, Bible-believing, hands-and-feet-of-Christ Christian," says Stauffer. "I have three people who make me a daughter of the American Revolution. My family has been here since 1720."

Four days after the election, Stauffer went to Fred Meyer — they have the best scarf selection, Areej told her — and picked out a hijab for herself. Stauffer says that some of her fellow parishioners at her Christian church have been skeptical of her choice to wear a hijab, but mostly they understand: It's a statement of solidarity, and an opportunity for conversation.

She points to the historical trend of one minority group or another becoming the "whipping boy" for extremists.

"I won't participate in it," she says. "As an American and a Christian, it's my duty to challenge it."

Stay-at-home mom Vanessa Judd says the note appeared on the door of the Sudanese refugee family shortly after the election. She says it was a torn-out sheet of college-ruled notebook paper Scotch-taped to the door, with just three words, crudely scrawled: "Go Home, N---ers."

She knew the family because her son was in the same sixth-grade class at Wilson Elementary School with one refugee family's sons. This family had lived in a refugee camp in Ethiopia for seven years before coming to Spokane, Judd says. For the past year, Judd and four other moms — including Spokane Regional Health District spokeswoman Kim Papich — had been helping out the family. They visit often. When the Sudanese family's mom gave birth at the end of October, they brought meals for two weeks.

And this note, Judd says, made her sick to her stomach. She tore it off the door, hid it in her purse, and says she threw it away in a trash can at a nearby 7-Eleven. She says she wanted to protect the family from ever seeing it. She wanted to pretend it never happened.

Papich and Judd say they later went back to dig through the garbage can at the 7-Eleven to find the note, but couldn't. Without that evidence, she knows, she can only ask people to believe her.

She doesn't know who wrote the note, or why. For her, it just highlighted how necessary their outreach was. Her group ramped up their campaign of small acts of love.

The group of moms brought over winter clothes for the family this week. Judd offered to drive the oldest refugee son and his girlfriend on a date to see Moana.

"At first, after the election you feel so powerless that you can't do anything," Judd says. "But I can control what I can do to respond to this."

Elsewhere, there are different sorts of notes being written to refugees. Three local Christian churches — The Porch, Salem Lutheran and Branches — have been writing notes of support and encouragement. There are around 500 notes, filled with phrases like:

"This city is better because of your presence. Please do not lose heart."

"It is okay to feel afraid, but know that you are not alone. You are never alone."

"If we meet on the street, I will smile at you and if you want your hand to be held, I will hold it."

They'll be hung up in the offices of Global Neighborhood, a job-training nonprofit and employer of local refugees, as a small way Spokane can show refugees that they are loved.

Ultimately, for Omar and Faris, that's a theme they keep returning to. In Spokane — at least so far — they feel welcome.

"People are friendly. They smile," Omar says. Areej translates. "They don't discriminate. They treat refugees equally as people who have lived here." ♦