In Gulf of Oman, tankers are struck again, raising fears of wider conflict 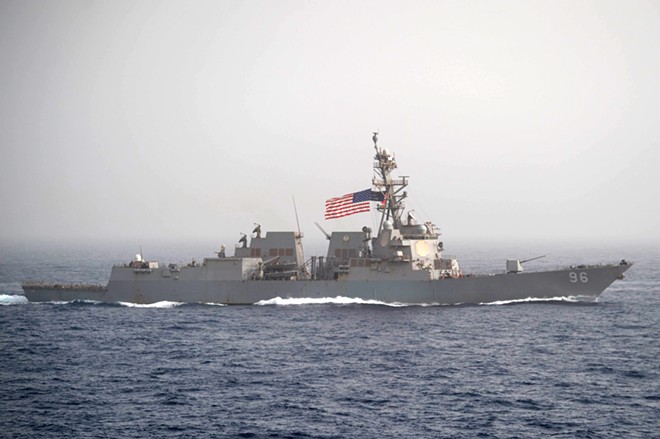 Seaman Zachary Pearson/U.S. Navy via The New York Times
In an image provided by the U.S. Navy, the USS Bainbridge, an Arleigh Burke-class guided-missile destroyer, in the Mediterranean on April 24, 2019. Navy officials said the Bainbridge was “rendering assistance” after the reported attacks on two tankers in the Gulf of Oman on June 13, 2019.

LONDON — Explosions crippled two oil tankers in the Gulf of Oman on Thursday in what the United States called attacks by Iran, raising alarms about immediate security and potential military conflict in a vital passageway for a third of the world’s petroleum.

The explosions forced the crews of both vessels to evacuate and left at least one ablaze, and hours later the causes were still under investigation. Yet the backdrop of steeply rising threats between President Donald Trump and Iranian leaders gave the stricken ships a grave significance even before the facts became clear.

By afternoon, Secretary of State Mike Pompeo said that U.S. intelligence agencies had concluded Tehran was behind the disabling of both ships. Without providing specific evidence, he pointed to the weapons used, the expertise and resources required and the similarity to other recent attacks attributed to Iran.

Senior American officials have already blamed Iran for similar attacks last month against four tankers on the same waterway. Iranian officials, who denied any involvement in those attacks, also rejected assertions they were behind the events Thursday and implied Iran had been framed.

“Suspicious doesn’t begin to describe what likely transpired this morning,” Mohammad Javad Zarif, Iran’s foreign minister, wrote on Twitter. Pompeo, firing back at his news conference, said Zarif “may think this is funny, but no one else in the world does.”

Besides its importance as a petroleum highway, the Persian Gulf also divides bitter and heavily armed rivals, with Iran on one side and the U.S.-backed Arab monarchies of Saudi Arabia and the United Arab Emirates on the other.

Iranian officials suggested Thursday that the new attacks might be the product of an elaborate conspiracy by their enemies.

But many analysts said that despite Iran’s denials there was a growing consensus in the West that Iran had been behind last month’s attacks, which took place near the port of Fujairah in the United Arab Emirates. And they argued Iran appeared to be seeking to demonstrate it could imperil the world’s oil markets but without leaving the kind of fingerprints that could trigger U.S. military retaliation.

Crude oil prices rose more than 3% in response to the crippling of the two ships Thursday, indirectly boosting Iran’s revenue as an oil producer.