People: Any show that Last Chance For Gas plays is a donation of their time 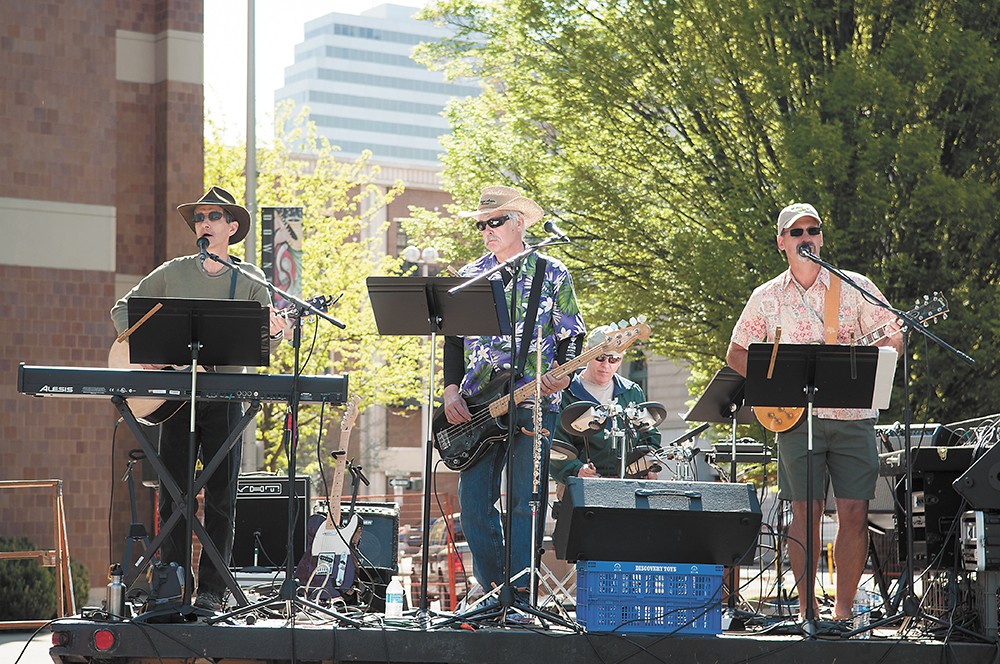 Paula Siok
Last Chance for Gas are regulars along the Bloomsday course. From left, they are: Greg Schmidt, Robin Amend, Jim Brickey and Bruce Ellwein.

Combined, they say they have about 200 years of experience playing music.

But that doesn't mean the men of Last Chance for Gas are quitting their band any time soon. They're having way too much fun.

There was the time they accompanied the Eastern Washington University cheer squad for a school pep rally. With a flash of red and white in front, no one likely noticed the musicians in back. But mostly, the cover band plays gigs for charity — everything from fancy galas to community benefits and church fundraisers. Last Chance for Gas does so for free, instead asking groups they entertain to donate to a charity of the group's choice. To them, music is a ministry. They say they don't care about making money through this outlet.

"Of course, we don't want to undercut musicians. We know people are working for a living," says bassist/clarinetist Robin Amend, who owns Amend Music Centers. "We want to make sure that people realize that music isn't a free thing. But what we're doing is something different."

Earlier this summer, the four-piece is goofing off at keyboardist/guitarist Greg Schmidt's Cheney home, a cushy suburban two-story they convene at every Thursday without fail. In this band practice space, facing one another in a circle, they can shed the responsibilities of the day and simply play.

Today, they begin as they always do — practices and shows alike — with Jackson Browne's "Running On Empty."

Amend and Schmidt, along with guitarist Bruce Ellwein, sing in three-part harmony, while drummer Jim Brickey keeps the time on an electronic kit. "I don't sing," he later says. Amend misses a note and laughter ensues. But they keep going, getting into the groove — especially Ellwein, who has a classical guitar background and the soaring soloing skills to prove it.

"I'm lucky they let me in this group," Amend says.

Last Chance For Gas started about five years ago at Spokane's First Presbyterian Church with everyone but Brickey (who at 65 is the oldest, but still the one in charge of the group's Facebook page).

"We were all backup singers in the church praise band. No one was a lead singer," Amend says. "We thought we'd make a group where we'd all be a singer. It started as fun."

Playing Bloomsday with various church groups, they soon branched out on their own. But finding a drummer proved difficult. They wanted an "old codger," Schmidt says, a person who knew the rock 'n' roll songs from the 1960s and '70s and also the contemporary praise songs they covered. Through a friend, they found Brickey. Walking into that first rehearsal wasn't so easy for the drummer.

"Six years ago, I had a bad accident, snapped my neck and was paralyzed from the neck down," Brickey says. "My physical therapist asked, 'What is the one thing you could do, if you could do it today, that would convince you that you were back to where you were before the accident?' I didn't hesitate: 'Drumming.'"

While recovering at St. Luke's Rehabilitation Institute, Brickey had to learn to walk and feed himself. Along the way he got back to picking up the drumsticks.

"I got connected with these guys, and the first time I came to practice I was so discouraged. I knew how well I played when I was younger, and that was gone," Brickey recalls. "These years playing have allowed me to gain my strength back."

After saying all of this, the rest of his band is taken somewhat aback. He's never shared much of his story with them.

"I could tell he was rusty that first rehearsal," Schmidt says. "But the thing is, Jim nailed it. The drummer's job is to keep the time, and he did that from the first day. He may not have the coolest fills, but who cares?"

This summer, the four-piece plans to bring their infectious crowd-pleasers, like "Brown Eyed Girl," "Jesus is Just Alright," and "Margaritaville" to a handful of community fundraiser events. They say the important thing is to capture the essence of the song, not try to emulate it perfectly. In the meantime, they'll keep on practicing.

"We take our music seriously," Brickey says. "Not ourselves." ♦

Find out more about the band at Facebook: Last Chance For Gas

Contemporary kitchen design is all about function - and fun

Before & After: Transformations from local DIYers