In one day, one man tries to die but survives. Hours later, one woman tries to survive but dies 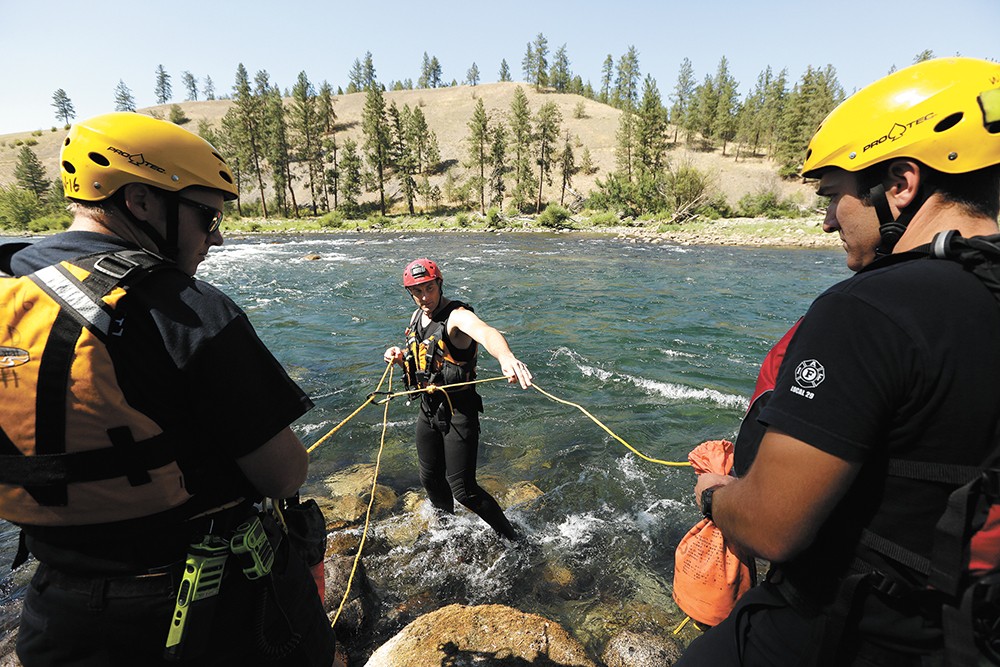 A man clings to the outside of the railing on the T.J. Meenach Bridge early on the morning of July 3. He appears determined to end his life.

Some members of the Spokane Fire Department's swift-water rescue team wait in the water below and others wait behind trees and bushes — out of sight so as to not agitate the man in crisis. Waiting is all they can do now.

As the morning sun beats down, police talk to the man for more than an hour, recalls Jason Keen, a member of the swift-water rescue team, who was waiting on shore.

And then, as if without warning, the man lets go.

He hits the water, and within seconds the water rescue team swarms the man. His purposeful movement, as if he's trying to swim, indicate that he's still conscious, Keen says. Firefighters paddle in kayaks and grab the man's arms as he flails. It takes only minutes to ferry him to the shore where Keen is waiting with other first responders.

As paramedics assess the man for injuries, he complains of trouble breathing, Keen recalls. They're concerned that he may have broken a rib and punctured a lung. But tests initially show that the cuts on his head are the man's only injuries.

"He lived," Keen says. "From the perspective on the shore, everything went like it should. He hit the water, he was in the boat and in an ambulance in minutes. That's the best we can ask for. But it doesn't always go so lucky."

For most, the Spokane River elicits pleasant memories. It's a place to float with friends, maybe it sparks creative juices, and the natural beauty has come to define this region with a river running through it.

But for those select few — the first responders who are called to its banks, its rapids, its bridges — the river is a symbol of tragedy and a reminder of the painful randomness of life itself.

Around midday, Kelsey Groff, her boyfriend, Derek Garcia, and their kids pack up for a picnic by the river. They take a hammock, too, and head to Bowl and Pitcher in Riverside State Park.

The foursome cross the main bridge over choppy water and hike north along the river for about a mile, Groff says. From the bank, they see a woman floating, face down, wearing a life jacket and holding an oar. Groff thinks she must be swimming.

They continue along the river and so does the woman. But when Groff looks again, the oar had floated away, and a man runs from behind yelling, "She needs help! She needs help!"

That man, Kyle Murphy, dives into the freezing water and swims to the floating woman. Her life jacket had slipped so far up that her head is underwater, Murphy recalls. She isn't breathing and does not have a pulse when he reaches her in the middle of the river.

Murphy swims back to shore, where Garcia is waiting. Groff calls 911 and takes the kids, ages 9 and 11, back to the main bridge to wait for first responders.

The bank is too steep to pull the woman, who has been identified as Deise Nagle, of Colorado, all the way to shore, Murphy says. So Garcia performs CPR while Nagle's legs hang in water. Murphy feels sick after he climbs onto land. He throws up on the shore.

Nagle was on a guided rafting trip with a group of 12, according to news reports at the time. The rafting service, Pangaea River Rafting, advertises tours in Washington, Idaho and Montana, on its website. One of them is a two-hour "beginner" level whitewater course on the Spokane River.

Murphy says he saw one of the two rafts flip, but he's unsure if Nagle was already in the water.

Spokane Fire Chief Brian Schaeffer told reporters that Nagle hit her head on the rocks beneath the water and floated three quarters of a mile down the river. First responders took two members of that group to the hospital. Nagle was pronounced dead by the river.

Original reports stated that the rafters were wearing cold water gear, but Murphy says that was not the case.

Spokane County Sheriff's Deputy Jim Ebel, a part of the marine enforcement unit, says "there's no reason that three or four of them should have been on that boat. Age-wise, size-wise, intellect-wise, a lot of things went wrong."

The often-repeated advice from firefighters to people having fun on the river is that they've never done CPR on a person wearing a life jacket. So for Keen, Nagle's death emphasizes the river's awesome power and unpredictability.

"Most of our calls are for people not wearing life jackets," he says. "It makes a difference." ♦

"The river is super dynamic," says Keen. "The water flows are different every day, and even throughout the day. It's so important that we train every single week, 12 months a year because it's never the same."

Keen says the most common calls the team responds to are potentially suicidal people on the Monroe Street Bridge. So far this year, the team has responded to 28 water rescues altogether, according to the department's internal numbers, compared to 36 in 2017, 25 in 2016, 20 in 2015 and 19 in 2014.

The original print version of this article was headlined "Two Falls"