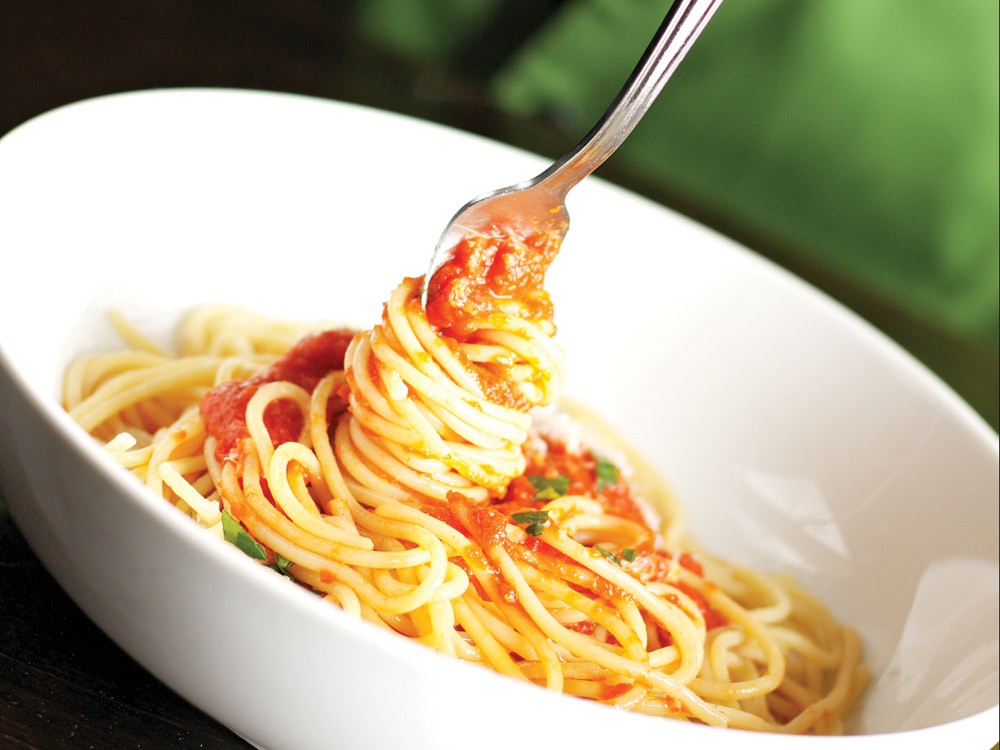 Young Kwak
A plate of spaghetti from Italia Trattoria
Buddha’s.)

Like most Americans who grew up in a middle-class suburb, my lunchbox was filled with the same PB&J as the next kid. But, at an early age, I was aware of our family’s cultural ties to food.

In Search of a Decent Plate of Spaghetti

In Search of Banh Mi Sandwiches

Being Italian, good marinara sauce was important to us. The red stuff (my parents just called it “sauce,” as if there was no other) was on the stove every Sunday, every Christmas Eve, on every pizza and every shape of pasta. We were probably drinking sauce from bottles as babies.

But I’m a long way from those days. Now I’m a working schlub who just wants a good plate of simple spaghetti from time to time. If I don’t feel like making it myself, where can I get some?

I’d heard that Geno’s (1404 N. Hamilton St.), the recently renovated Italian joint near Gonzaga, was good for casual Italian fare, no fancy stuff. I started there.

At Geno’s, the simplest dish you can get is their linguine & meatballs ($10), fresh pasta served with a “famous marinara sauce.” (They can serve it with gluten-free pasta, too, and shave off $1 if you opt out of meatballs.)

Our dinners arrived in top-heavy bowl/plates, with a neat twist of noodles tossed in sauce a deep marinara red. I’m off to a good start. The sauce here is tasty — though not what I’m used to. Red pepper flakes punch up the spice factor, and there’s a lot of garlic, too. I’m not complaining, though. Later, I call chef William Webster to hear about what makes his sauce “famous.”

Like me, he was trying to revive his memories of the East Coast Italian fare he ate as a kid. And, like so many others, he learned his recipe from someone else: a friend who opened a restaurant in New Jersey. The menu that his friend toiled over was perfect and so “his entire menu is what I put at Geno’s,” Webster says. “He’d perfected something that I knew for a fact that it was going to be amazing.”

Webster uses shallots and garlic to start, and a “slow reduction of red wine.” He says that everything about the sauce there is fresh — from the roasted Roma tomatoes to fresh herbs.

Peter Karatzas, the chef at Café ItalIano (3331 N. Indian Trail Rd.), relies on a different kind of tomato: the San Marzano. “They’re juicy and there’s no other tomato like it.”

The spaghetti marinara ($14) at Karatzas’ tiny strip-mall gem is a plate of thin noodles (they’re not made here) in wine-red, rich sauce that’s sweet without being cloying.

When I ask him how he walks the line between being too sugary and too acidic, he says that his sauce is “a $30,000 recipe” — he learned how to make it 47 years ago from an Italian named Carlo.

But Karatzas, who is Greek, diverges from Italian tradition in at least one crucial way: He doesn’t use olive oil in his sauce. If marinara is the blood of any Italian, olive oil is like our DNA. But Karatzas says that olive oil’s low smoke point makes it burn too quickly. He starts with an oil that can take the heat, like grapeseed or sesame seed oil. He adds in olive oil later — simply for flavor.

But he says the key is watching the sauce diligently: “If you don’t have a wooden spoon and you don’t stay on top of it, it will burn on you.”

As we eat, someone at our table says that if I’m looking for good, cheap Italian, I should check out a burger joint in Hillyard.

The place screams burger joint. The old signs from the Steer Inn are still up, there’s a drive-thru and, when I get inside, a cook is yelling “double bacon with cheese!” to a hungry lunchtime customer. Customers shout thank yous and goodbyes to Tony Ferraro, who’s working behind the counter with his son and nephew.

While it seems everyone is ordering from the burger menu for lunch, I opt for a plate of spaghetti with marinara — hold the meatballs ($6).

My plate of pasta has a double-punch of sauce. It’s mixed throughout and then ladled on top — like my Dad would serve it. It’s delicious. Ferraro’s sauce hits all the right notes: just enough sweetness, just enough herbs, not too much acid. It’s balanced and comforting — I can tell this is what he serves at home to his family.

Ferraro says he learned this recipe from his mother, who was from “way south” in Italy.

The key to his sauce, he says, is making it just like he would at home — in a small pan, not in a big restaurant-sized pot. He says people are usually too heavy-handed with herbs and spices when they make sauce.

“Or they put too much seasoning in there. … They put too much basil or too much oregano in,” he says. “When you taste the sauce, you gotta know it’s there, but you can’t distinguish it.”

I know it doesn’t really fit within the Cheap Eats budget, but I figured if I’m doing a story on good Italian, I should hit up Italia Trattoria (144 S. Cannon) — a place I hadn’t been to, and I’d heard focuses on fresh, seasonal ingredients. After all, simple spaghetti is the cheapest thing on their menu.

There, I find one of the most delicious sauces I’ve eaten — maybe ever — in the simple “Spaghetti, Meatballs, Red Sauce” ($14, but without meatballs, they shave off a few bucks, and they’re able to do glutenfree, too).

Chef Anna Vogel’s sauce is a gorgeous lipstick red — the brightest of any of the sauces I’ve had so far, like it’s made from tomatoes miraculously growing out back in the winter snow. When my plate is clean, I’m not weighed down like I usually am after a plate of pasta.

I’m sure that Vogel’s sauce must be made with vine-fresh tomatoes.

Nope — canned. She says that the ones she uses spend time in the California sunshine, getting “ripe until [they’re] right at the edge of being overripe” before being canned. Because they’re so sweet, Vogel says, she doesn’t need to add sugar. Just a touch, “for the hell of it.”

Vogel grew up in Switzerland, on the edge of Italy, and started eating Italian food at a young age. As a chef, though, she’s continued to perfect the sauces she ate as a child.

So I ask her: How can she, my family, my husband’s family and all these other cooks in town make something with the same ingredients and make it taste so different?

“People think tomato sauce is a simple thing, and I disagree,” she says. “Sometimes simplicity is more difficult.”