In Search of Banh Mi

Looking for Vietnamese sandwiches around Spokane 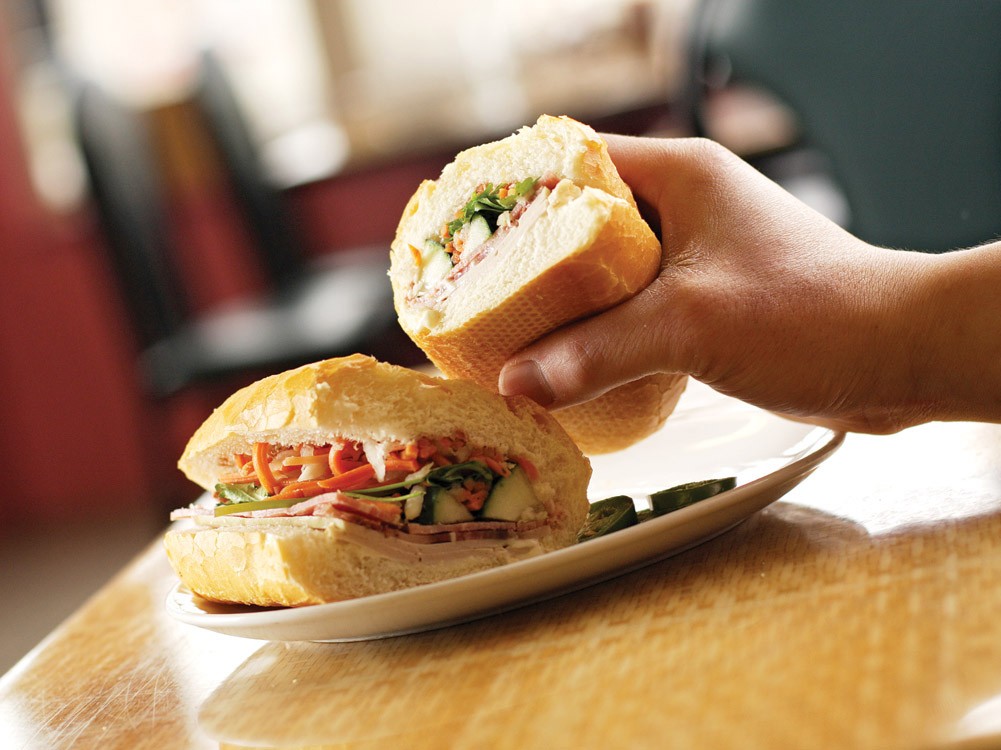 If you are what you eat, then I am a box of Hamburger Helper. I was born into a white family and grew up in the very small rural town of Newport, Wash. Newport had (and still only has, to this day) one Mexican and one Chinese restaurant.

In Search of a Decent Plate of Spaghetti

In Search of Banh Mi Sandwiches

My family avoided ethnic food. My dad hunted anything deemed edible, we gardened, and most nights we ate some variation of meat and potatoes or Hamburger Helper.

It was like living in hillbilly food hell. Then I went to college, became a vegetarian, and moved next door to a Vietnamese restaurant only to fall in love with a little sandwich called banh mi.

This simple baguette is the product of French imperialism and the country’s almost-century-long colonization of Vietnam. The standard version comes smeared with liver pate and packed with cold cuts. More fanciful versions, like the ones served today, developed in southern Vietnam and are made with a variety of meats, pickled vegetables and chili sauce.

These delicious sandwiches are almost as popular as Subway in places like Los Angles and Seattle, but they’re difficult to find around here. I tracked down four restaurants and one bakery (Rocket Bakery) that serve them. Although I’m told vegetarian tofu sandwiches are traditionally reserved for Buddhist temples during special religious events, I’m feeling rather zen in my quest.

Bonsai Bistro (101 E. Sherman Ave., Coeur d’Alene) is a sea of windows and open space across from the Coeur d’Alene Resort.

For $8 to $10, you can choose from tempura Mexican prawns, Sambal chicken, three-day-marinated pork, soft shell crab or oyster. Ask for tofu, though, and you shall receive.

The sandwich is a bouquet of vegetables and colors. Spindle beets and carrots dress the side of the plate. Cubed, curry-flavored Small Planet Tofu, sautéed in onion and ginger stock, rests atop Napa cabbage slaw, thinly sliced jalapeños, red peppers, cilantro, and pickled onions. The banh mi fillings seemingly float within the soft, char-broiled hoagie bun, citrus aioli and chili sauce, which is made from a simple red wine vinegar syrup.

The balance of sweet cabbage slaw, earthy flavors, perfect tofu and just a little bite of pickled onions and peppers is almost too good to be true. I’m left licking my fingers and wanting to eat the crumbs that have sprinkled on the floor around me.

Bonsai Bistro head chef Troy Chandler understands my love of banh mi. He ate one for the first time while working in a Cajun restaurant in the South, where his sous-chef was Vietnamese.

“I told her I wanted to eat something different, so she said, ‘Here, I’m going to make you something my family makes,’” Chandler says. “She made me banh mi, and I thought I was going to lose my mind. It was the best thing I’ve ever eaten in my life.”

Chandler vowed that if he ever worked in an Asian restaurant, he would honor his former sous-chef and use her family’s banh mi recipes. He put it on the menu at Bonsai two months ago.

“They’ve gotten a slow start,” he says. “People around here don’t really know what they are, but I’m going to stick it out. I think banh mi is going to catch on.”

The menu at Pho 999 (2904 E. Sprague Ave.) calls itself “worthy of its fame.” At first glance, the restaurant looks a little-down-and-out and oddly placed amongst the pawnshops and used-car lots on East Sprague. But their $3 banh mi was delicious.

I could hear the grill in background as my meal was being prepared. This savory sandwich is smothered with carrots, grilled onions, sautéed and seasoned (not pickled) cucumber, and just a dash of cilantro.

A homemade soy sauce is drizzled all over the inside of the perfectly toasted bun and over the little chunks of fried tofu.

The waiter tells me the restaurant has been serving the sandwiches for about a year, but you won’t find them on the menu. Instead, look for a small sign at the cash register, next to a gold statue of Buddha. If you’re looking for something else — say, grilled pork banh mi — just ask. The server says the sandwiches can always be made to order.

Three Sisters Vietnamese and Chinese Cuisine (10615 E. Sprague Ave.) stands in the heart of Spokane Valley, in a former fast-food space. A waving gold “good luck cat” sits on the register, and the sound of children and elevator music fills the air.

The $3 banh mi sandwiches here come in wrapped, wax-paper packages, held together with a rubber band.

Choose from pork, shredded pork with fish sauce, grilled chicken, grilled pork, barbeque pork or tofu. The tofu banh mi is unlike anything I’ve ever eaten before.

The sandwich is served on a French baguette with fried tofu and sprig after sprig of cilantro. Thinly sliced cucumber, shredded pickled carrots and daikon dress the sandwich. The daikon is incredibly sweet, as is the thick, almost caramel-like peanut sauce smeared throughout the bun.

Without chili sauce, jalapeños or onions, the sandwich is almost too sweet, so I spike it with Sriracha chili sauce, which creates a nice balance of flavors.

Long Dam and his daughters, Tammy, Jenny, and Lyn, opened the restaurant two years ago. Tammy says serving a traditional Vietnamese sandwich brings pride to their country. She adds that banh mi is popular with their customers, but it’s also a family favorite.

“Each time someone went to Seattle, they would buy 50 banh mi sandwiches,” she says. “Then they’d take them home and split them up amongst the family. It’s nice that we can make them at home now.”

Vien Dong (1730 E. Sprague Ave.) is a Pepto-pink little holein-the-wall on east Sprague. Behind a veneer of fake flowers, painted fans and gold shrines to Buddha is one helluva tasty sandwich, and for only $2.75.

The open-face sandwich is served on a crackled yet soft baguette and served with a bowl of sweet peanut dipping sauce. Choose from tofu, head cheese, barbecue pork or ham. Either way, the sandwich is sprinkled with shredded pickled carrots and daikon.

Large spears of cucumber glossed in homemade mayonnaise nestle between fried slabs of tofu, cilantro and jalapeños. The carrots are surprisingly sweet, the golden soft tofu almost takes on a nutty flavor. When combined with some Sriracha and the refreshing cool bite of cucumber, it’s perfect.

Yen Hau’s family has owned the restaurant for seven years. She says the Vietnamese restaurant in the space before them was the first to serve them, and now they’re continuing the tradition. The restaurant prides itself on authenticity.

“The sandwich isn’t that special, it’s the bread,” Hau says. The restaurant special-orders its Vietnamese French-style bread from Seattle and serves upwards of 400 sandwiches each week. Hau says she tried to get local Safeway and Albertsons stores to make the bread, but it just wasn’t the same. She says Vien Dong is one of the few local restaurants to serve banh mi because there isn’t a big Vietnamese population around here, and the profit margin for the sandwiches is slim.

“We don’t make much money on the sandwiches,” she says. “We only make about 25-35 cents per sandwich, but we know our customers like them.”

My quest for tofu banh mi sandwiches didn’t exactly elevate me to zen levels, but I did discover four delicious Vietnamese sandwiches. (And it did bring my figure a little closer to