Golden Hills just celebrated two years of chipping away at your curious devotion to Coors Light. 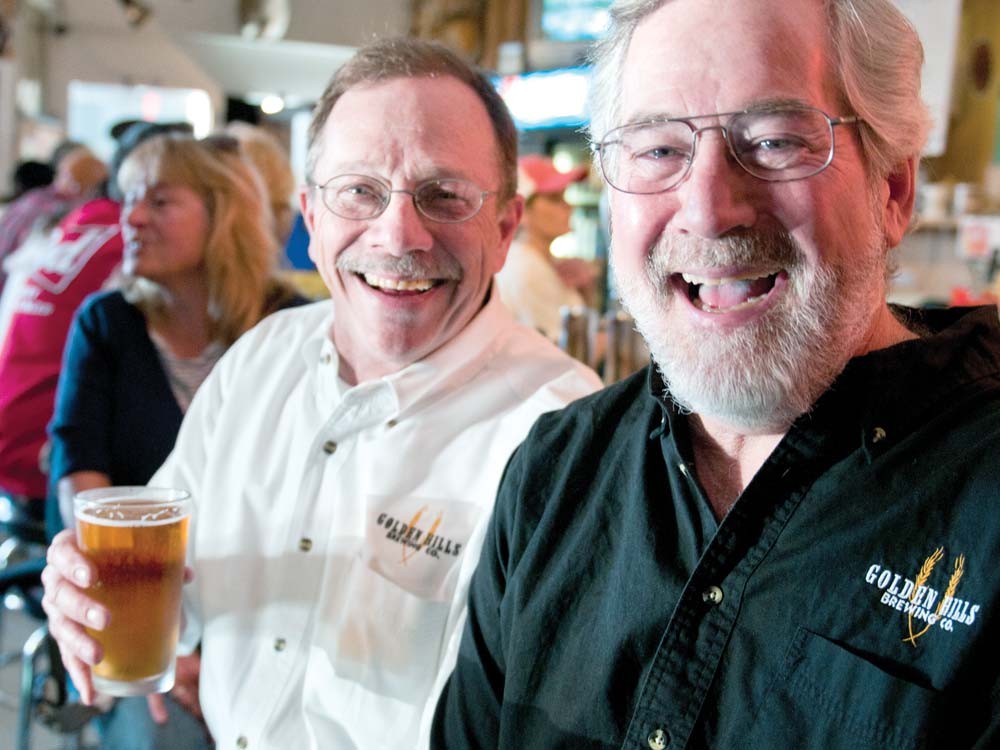 Bernie Duenwald stands in Bubba’s Bar & Grill in Reardan two weekends ago, pointing out people he’s known for 40 years. “That’s Ed Gray,” he says, pointing to a table near the bar. “At the beginning, Ed told me, ‘You’re never gonna make a beer I like better than Bud Light.’” Duenwald notes with satisfaction that Gray is now a stockholder in his company, Golden Hills Brewing.

Duenwald is among his people, and just down the bar from a taxidermied brown bear.

He has spent two years raising a brewery from the scrubland of the West Plains, first in a pilot facility on Gray’s farm north of Reardan, then in their production facility in Airway Heights. Duenwald and brewmaster Jim Reiha are taking this evening to celebrate their accomplishment.

Reiha joined Golden Hills last year, after spending 31 years at massive beer companies, including 25 as a brewmaster at Anheuser-Busch. He says he got tired of working at places where “the name drives the company. I wanted to come back home and work on a very local beer.”

That doesn’t mean, though, that Anheuser-Busch is in Reiha’s rear-view. In fact, he’s taking direct shots at them.

Duenwald and Reiha are anomalies in the world of craft brewing. Most small breweries make ales — full-bodied, high-alcohol, densely flavored beers, like stouts, ambers, IPAs, etc. In doing so, they focus on the segment of the market that wants the biggest-tasting beer. Golden Hills is targeting the market those other microbreweries ignore — people who drink lagers, which tend to be lighter, with a crisper finish, and which are designed to be drunk by the pitcherful.

Lagers can still have flavor. Ben’s Brown, a rich brown lager brewed by Golden Hills, carries a chocolatey punch like a porter.

But the crispness of lager beers has helped make them — mostly as sold by a handful of massive corporations — the style of beer consumed by nearly 95 percent of Americans.

Ninety-five percent is a staggering number, and Bernie Duenwald wants a chunk of that action.

In telling the tale of Golden Hills’ market fortunes, Bubba’s is a good place to start. The bar, which sits in the heart of Reardan, right off Highway 2, is a frequent stop for boaters and anglers on their way to Lake Roosevelt in the summer.

The rest of the year, it’s mostly farmers. “Winters can be a bit dismal,” says Kevin Herley, who bought the place with his wife, Toni, 6 years ago.

Herley sells what he calls “basically tavern food, but with a hint of quality.”

He makes his own dressings and a scratch-made macaroni salad they “sell the hell out of.”

Before Duenwald approached them, their five taps were taken up with Budweiser, Bud Light, Coors Light, Keystone “and one other oddball.”

Put simply, Bubba’s is prime macrobrew country. But Herley liked the local angle, so he took a gamble on Golden Hills early in the company’s development. The first keg of beer out of their Airway Heights facility shipped to Bubba’s. Golden Hills beer now occupies three of the taps here, leaving Bud Light and Coors Light as the only macros. “It’s caught on well,” Herley says, “even in winter.”

Herley estimates that the three Golden Hills taps account for 25 percent of his beer sales. The Coors and Bud make up the other 75 percent. As for the regulars that used to buy pitchers of the nowdisplaced Keystone, they “just go for the Coors [Light].” Herley says. “They’ve drank that for years. They aren’t going to touch anything else.”

Golden Hills has made significant inroads here — and in sports bars like the Swinging Doors and the Q at Northern Quest — and is beginning to gain a foothold in higher-end pubs focusing on those bigger-flavor ales.

On Spokane’s South Hill, Hop Shop co-owner Andy Gardner refuses to serve corporate beer. “They’re using corn and rice,” he says, “Those are adjuncts that just don’t belong in beer.” Even the most serious taphouse, though, needs a “sessionable” beer, something light and crisp to drink after the “really high-octane IPAs” and 11 percent imperial stouts. Gardner always keeps two Golden Hills beers — Clem’s and Ben’s — on tap.

Beverage. This leaves Duenwald free to build a market in Seattle. Every Thursday, he loads up his red ’98 Ford Ranger pickup with seven kegs and heads west.

He has landed Clem’s Gold a permanent tap at Hopvine (on Seattle’s Capitol Hill) and the Montlake Ale House. Fiddler’s Inn, in north Seattle, takes a keg a week and is on the verge of needing two.

While their expansion strategy is to re-educate connoisseurs about the possibilities of a lager, the men still have their eyes on the big boys. They have a new beer on the horizon — Em’s Easy, an even lighter lager than Clem’s. (Em’s would ideally take on Bud Light, while Clem’s is a better match against standard Bud.)

The mega-lager industry carries almost everything else. But Duenwald reiterates that he wants to take market share away from Budweiser, not Full Sail or Sierra Nevada or Bridgeport. “If I get 1 percent of the 95 percent,” he says, “I’ll be better off than if I got 10 percent of the 4.5 percent.”

Back at Bubba’s, Herley and Duenwald spend the evening shooting back and forth at each other, alternately paying each other compliments and busting each other’s balls. Just as Duenwald is working himself into a lather over the possibilities of the lager business, Herley cuts in. “Bernie,” he says, “tell ’em what you did in prison.”

Duenwald looks abashed, but that only lasts a moment. “Kevin likes to joke,” he says, with a big smile, “I’ve never been in prison … for any length of time.”

This is Golden Hills’ answer to Budweiser’s billion-dollar advertising budget: selling beer one barroom joke at a