In Spokane, parents weigh the dangers of youth football against the love of the game 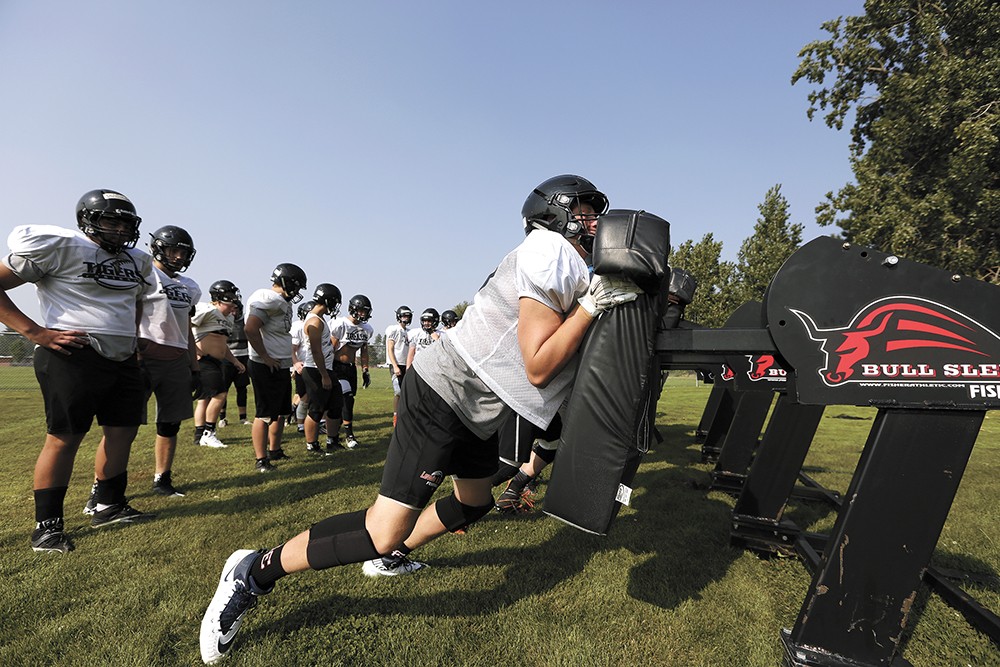 Thomas Ehring always imagined high school would be like the movies. He wanted to play football. He wanted a letterman jacket. He wanted to walk around the halls with his arm around a cheerleader.

Thomas spent three years living overseas in Portugal during middle school. Watching football kept him connected to home. In high school, back in Spokane, he decided to try out for the football team.

His mom, Beth Ehring, was skeptical. She's a nurse. Thomas' grandfather on his dad's side played football, and she saw how heavy a toll it took on his body. With more research coming out on the dangers of repeated head trauma, parents were growing concerned about the sport. And Thomas wanted to play center, a position known for its constant head-banging.

But she was reassured by new equipment and safety measures at the high school level. She wanted to let her son follow his dream.

"American football is so much a part of our culture and who we are," Beth Ehring says.

It's a question families across the nation are struggling with. Football is ingrained in our culture. But is it worth the long-term risks?

New research on head trauma and Chronic Traumatic Encephalopathy (CTE), a degenerative brain disease found in athletes, keeps making the decision harder, especially at young ages. In April, a Boston University paper found youth tackle football was linked to cognitive, behavioral and mood symptoms later in life. A study in the Journal of the American Medical Association found CTE in the brains of 99 percent of NFL players and 91 percent of college football players. And the local community was shaken to learn that Tyler Hilinski, a Washington State University quarterback who committed suicide in January, was found to have CTE at just 21 years old.

Statewide, the number of high school football players has dipped since 2010 by about 6 percent, according to data from the National Federation of High Schools. Locally, the Spokane Youth Sports Association shut down tackle football, in part due to dwindling participation from parents worried about concussions. The YMCA, which still has a local youth tackle league, has seen a slight decrease in participation, according to youth sports Director Patrick Bryant. So have high schools in the Inland Northwest, like Spokane's Lewis and Clark.

Still, it's only a small dent in participation. Largely, youth football remains strong, with parents cautiously letting their kids play if they want.

"They have to reach for their dreams and goals. I can only support him," Beth Ehring says. "I would love for him to be eight months old and in my arms still, but that's not going to happen."

Concussions are the first thing on the agenda for Lewis and Clark High School football, says coach Dave Hughes.

In a meeting during the first week of practice, Hughes tells the team members how to protect themselves from a head injury: keep your head up, don't lead with your head when tackling. If you think you might have a concussion, say something. If not, then you risk injury, including death.

Then the kids go through baseline tests, used later to compare when an athlete is suspected of having a concussion.

The game is safer now than it's ever been, Hughes says.

Still, he tries to balance the concern over head injuries. He hands parents articles suggesting football isn't as dangerous to youth as it's been portrayed. The articles include a study that suggests high school football is not associated with cognitive impairment later in life, though the study was done on men graduating from high school in 1957. The rest of the information consists of opinion pieces on why kids should play football, including one by a brain scientist, and one by John Harbaugh, coach of the Baltimore Ravens.

It's a line of thinking common among high school coaches in Washington. Mike Colbrese, executive director of the Washington Interscholastic Activities Association, says teams all follow concussion protocol — in fact, he says, Washington was the first to develop concussion protocol in 2009. Improved helmets, field surfaces and teaching of techniques all have made the game safer than ever, he says.

Concussions occur in all youth sports, he notes.

"Concussions are really a concussion issue. It's not a football issue," he says.

The problem, experts say, is that CTE isn't necessarily a concussion issue. It could simply be repeated blows to the head. And that, uniquely, is a football issue.

Young Kwak
Lewis and Clark coach Dave Hughes says he has "no problem" talking with parents about concussion safety.

Craig Panos has seen his fair share of head injuries. Panos is a physician for the U.S. Ski Team, and he's Kootenai Clinic's sports and concussion medicine physician, overseeing concussion programs in schools in North Idaho.

Yet for all his experience, he admits there's plenty to be learned about head trauma and youth.

"We're trying to figure out: What is the age at which we can start allowing contact to happen? Is there an age where there's less risk with contact?" Panos says.

The challenge with studying CTE in youth is that it can only be diagnosed after death.

What has been established, however, is that someone can have CTE without ever being diagnosed with a concussion.

"I would suspect an isolated concussion or two that's appropriately treated is probably not what CTE comes from," Panos says.

Rather, it's the repetitive head-banging upon contact, the jarring of the brain inside the skull.

"We never find anything good about getting repeated contact over the years," Panos says.

Women's soccer can be just as dangerous when it comes to concussions, he says. But there's a major difference: In football, the intent of every play is to make contact.

Coaches are smart to teach kids safer tackling technique, he says. But improved helmet technology has inherent limitations: the injury happens on the inside of the skull, not the outside.

"If you were to put any helmet — the best helmet in the world — on someone, and you hit them with another helmet, or they hit the ground, the brain still bounces [inside the skull]," Panos says.

Some experts have recommended that kids wait until high school to play tackle.

"We know that the younger you are when getting head injuries and the more you have at a younger age, the more likely it's going to impact you later on," he says.

Panos says he doesn't believe in "putting athletes in bubble wrap." He lets his own sons ski, even though he often deals with major head injuries with skiers. And Panos himself played football in high school.

But when asked if he'd let his own kids play football, a repetitive contact sport, Panos says he's not sure.

"They have never asked," Panos says. "I never was faced with that."

As Thomas Ehring walks toward the sideline during an August practice at Hart Field, he pulls off his helmet, his sweaty hair dangling over his forehead. His teammates razz him as he approaches a reporter. He speaks confidently, with a reassuring deep voice of someone much older.

For Thomas, it's all pretty simple. Use proper technique. Keep your head up. Know the difference between a headache and a concussion.

He thinks about the dangers of the sport sometimes. Family members lecture him all the time about safety. And even though his mom, Beth, trusts the staff at LC, she still has reservations about the toll the "barbaric game" of football may have down the road.

But it doesn't faze Thomas. He's living his high school dream. Next, he wants to play college. Even when he sees teammates go down with concussions, it doesn't scare him.