In the Dark on the Park 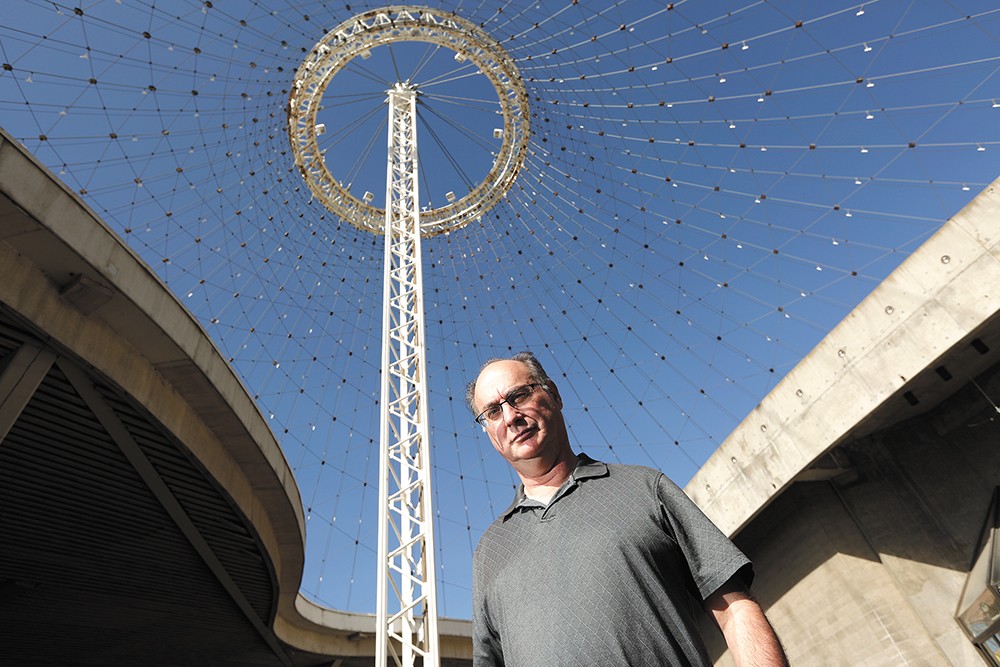 Young Kwak
Last year, city council candidate Andy Dunau resigned from the Park Board — and now he's accusing the board of failing to adequately inform the public about how the project has evolved.

The last time the $64.3 million Riverfront Park renovation was being hammered by doubts and criticisms,

"There's a lot of hyperventilating going on out there," he said at a March 2016 Park Board meeting.

The delayed start date of construction amounted to a "big whoop," he argued. Despite reports of projects overrunning budgets, they were on target overall, he said, and making necessary choices.

"You know, it's really easy for people to take shots in this," Dunau said. "I'm just going to ask people to be patient and trust that people are working really hard to make it happen."

Two months later, Dunau suddenly resigned from the Park Board and wouldn't publicly say why.

Now, the Riverfront Park project is under fire once more, with the news that the centerpiece of the project — the U.S. Pavilion — may not be re-covered, despite what voters were told when they passed the bond three years ago. It's caused City Council President Ben Stuckart to question the 100-year independence of the Park Board.

Park Board President Chris Wright shrugs off what he sees as a "very small minority of people focused on a cover." He points to the new grants and interest revenue that has allowed the city to improve the project.

And now, as Dunau runs for city council and several pieces of the project have been cut, he's emerged to lend his voice to the chorus of former Park Board members with serious concerns about the renovation.

"They're playing three-card monte with the budget and musical chairs with what might not be built," Dunau says of the current Park Board. "Apparently, the public is going to be the last to be consulted and the last to know."

"Andy is a candidate for office now," Wright says. "He's finding a convenient line of argument for this campaign that is simply not true."

Dunau counters by saying that Wright is "full of shit." He argues that recent events have proven his worries correct.

Dunau believes that the park rehab's troubles started at the very beginning. The master plan for the bond that voters passed in 2014 was "underbaked," he says, woefully underestimating the costs for several major projects. Projects grew bigger: The planned ice-skating rink became an ice-skating ribbon, complete with a full-scale kitchen. Surprise extra costs, like the need to fix the Howard Street Bridge, were heaped onto the project.

He says he argued that the board needed to constrain costs and start private fundraising. He even gave a PowerPoint presentation in 2015, identifying ways to save money. (One suggestion, listed under "Out There Ideas," included "Don't Cover Pavilion.")

Instead, he says, as the budgets for early pieces grew, the funding for later pieces quietly shrank.

"If you decided you want to spend more money on the ribbon, you should be telling people where you're taking the money from," Dunau says. "The fact that conversation hasn't been happening with the public raises a credibility problem."

As his dissatisfaction with the increasing cost of consultant contracts and add-ons increased, Dunau opted to resign. Initially, he refused to go public about why.

"Me publicly saying, 'I think you're going in the wrong direction' would have caused a kerfuffle in newspaper headlines, but it wasn't going to change where we were going," Dunau says.

Now, with doubts regarding whether the city will reach the final "north bank" phase of the project at all, he says he had to speak up.

In his home office on the South Hill, Dunau methodically runs through spreadsheets with a ruler, comparing four separate iterations of Riverfront Park bond budgets since 2014.

The funding for the meadow with the giant red wagon and the spot formerly known as Canada Island? Almost entirely gone. The funding for renovated park shelters? Gone. The pavilion budget? Slashed, for now, from $24 million to $19.6 million — or $21.5 million if pavilion funding from another part of the budget is included.

When the news emerged last month that the Park Board may ditch plans to re-cover the pavilion, it outraged former Park Board president Randy Cameron, who charged that the board had abandoned a promise to voters.

"Candidly, looking at all of this, I need to see facts about how you're going to spend the rest of the money," Cameron says. "You've totally lost my trust."

Dunau, however, wasn't surprised. In late 2015, he says, he sat down with Riverfront Park program manager Berry Ellison to try to hammer out a realistic budget. To compensate for the increase in other project costs, his draft budget slashed $8 million from the pavilion budget — a full third of the bond funding for the iconic landmark. He hoped that the Park Board would be able to restore the full funding later on, but that still hasn't happened.

"There really is no choice about the cover/no cover," Dunau argues. "They're already in that corner. Right now, they don't have that option." 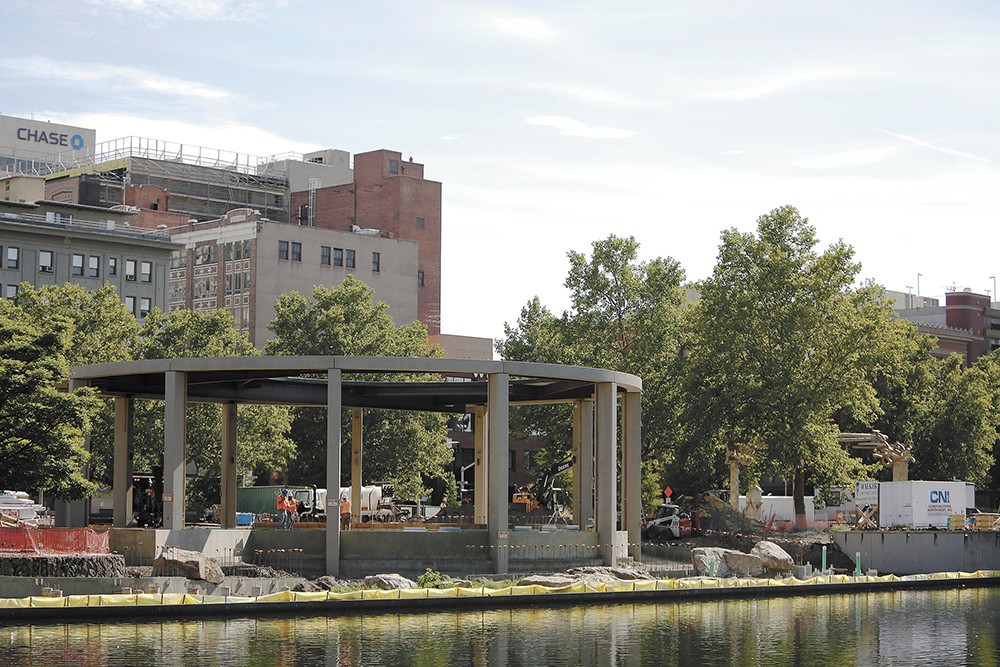 Young Kwak
The budget for the Looff Carousel area has increased, partly because of the need to fix the nearby Rotary Fountain.

Wright, however, is as optimistic as Dunau is pessimistic. He says that Canada Island and the red-wagon meadow were cut from the project because they weren't part of the original bond. He says events that would have taken place in the new park shelters can take place in the Looff Carrousel and the pavilion. He says the board is still considering a private capital campaign to raise more money.

And he says the Park Board is looking at ways to restore the full $24 million to the pavilion budget, partly by using new interest revenue — though he says the structural issues preclude a tent-style covering.

Wright says there's a ton of good news about the project. Bond market timing means the city won't have to shell out $4.3 million for debt service. The parks department successfully snagged $600,000 in brownfield cleanup grants to help with soil remediation costs and $500,000 in state grants for a regional playground. And the slow implementation of the bond has given the project $2.5 million in extra interest — with more on its way.

(The catch? $633,000 of that extra interest will go to help pay for another nasty surprise — a busted Rotary Fountain.)

Wright rejects the idea that the Park Board hasn't been transparent.

"Every budget we pass is done on the dais," Wright says. "We don't have secret meetings."

Dunau, however, says it's unrealistic to expect people to show up to every Park Board meeting.

"They have chosen to hide behind the curtain of 'You can come to an 8 am meeting whenever you want,'" Dunau says. "If you can't do better than that, don't expect the public to be anything but disgusted and frustrated."

Even Ken Van Voorhis, who spent six years on the Park Board, says he had struggled to get clear answers from the parks department about what was being cut. One reason why? The budget categories kept shifting, sometimes obscuring budget cuts.

For example, at first, the budget category for the U.S. Pavilion only included the pavilion. Then, it also included park shelters. After that, the category was renamed "Havermale Island" and included all the projects in the surrounding area. Now, it's back to just the pavilion.

"They'd just reshuffle the deck differently," Van Voorhis says. He resigned at the end of last year, partly because of his frustrations with the Riverfront Park project.

Only four of the 10 volunteer Park Board members at the March 2016 meeting remain on the board today.

"We lost a lot of history here," Van Voorhis says.

Stuckart, the council president, thought he knew what was happening with Riverfront Park. He'd campaigned for the bond, writing an op-ed with the mayor that championed the plan to cover the pavilion.

The frustration pushed him to consider a radical change. For the past century, the Park Board has had its own autonomy, and its own budget that can't be altered by the city council. Stuckart is bandying about the idea of undoing that. He says that the change would force the Park Board to come to city council to explain major changes, resulting in more transparency and accountability.

But here, at least, Wright and Dunau are united: Both think this is a terrible proposal, especially considering the success of Spokane's parks over the past 100 years. Dunau argues that there's nothing stopping the council from asking the board more questions.

Inlander Publisher Ted S. McGregor Jr. — Dunau's replacement as the Riverfront Park Committee chair — says the Park Board is considering another way to change its management structure: Turn management of Riverfront Park into an "enterprise fund," allowing money raised at the park to be used directly for future Riverfront Park improvements. The fund, he says, could be controlled by a mix of council members, mayoral appointees and Park Board members.

For now, however, the debate over the pavilion continues. On Monday, former city councilman Steve Eugster filed an attempt at a last-minute voter initiative, asking voters to demand a re-covered pavilion with a hockey rink at the center.

Wright remains an optimist. He believes that when the ice ribbon is finished, when the carrousel opens, when the pavilion upgrade is constructed, the fear and anger about the project will begin to evaporate.

"Some of the notions that might be floating out there are going to fade away," Wright says. "People are going to see what we've done with their money." ♦