In the Presence of Giants 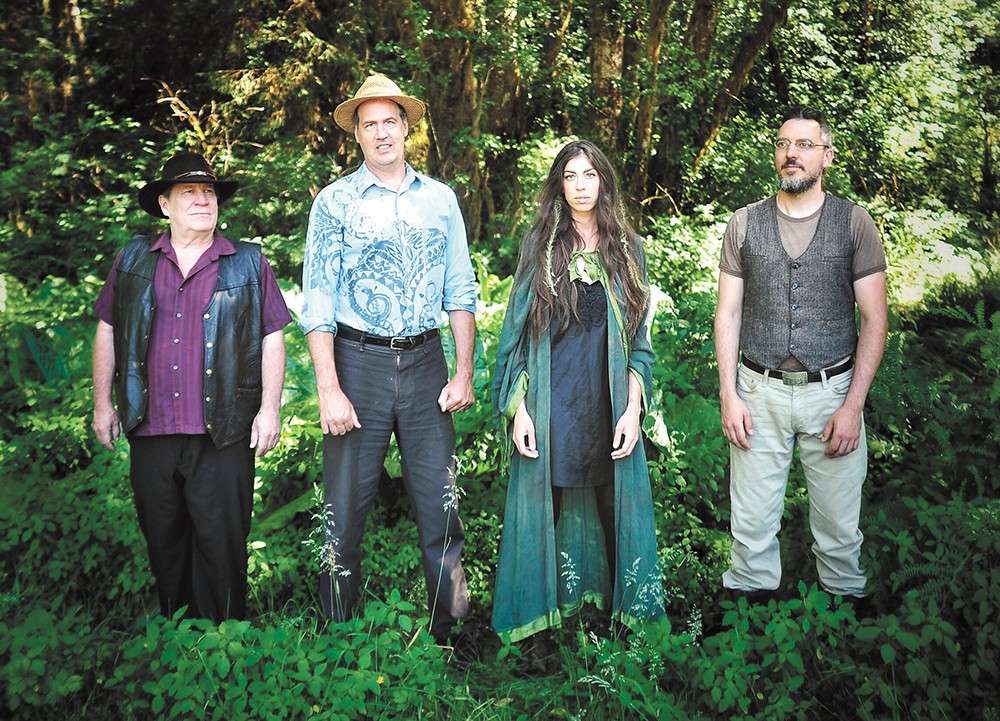 Megan Blackburn
Krist Novoselic (second from left) and his new band Giants in the Trees.

Giants in the Trees have yet to release any recordings,

and they've only played a handful of gigs. But the odds are high that their Big Dipper show Friday night is going to sell out. Much of that is due to the band's bassist, Krist Novoselic, whose earlier projects included Eyes Adrift and Sweet 75, and who performed for a time with the influential post-punk group Flipper.

Oh, and he was also one of the founding members of Nirvana.

"People come to see me. There are Nirvana fans," Novoselic says from his home in Western Washington. "But then the band starts, and that has to go away. It's just, what is this band now? It seems like we hold people's attention. We get a good response. And I think that's because of our approach to music."

The four-piece band got its start last summer when Novoselic, who lives in rural Wahkiakum County, met the other members — singer and banjo player Jillian Raye, guitarist Ray Prestegard and drummer Erik Friend — through their local Grange. It all began with a low-key jam session, and it snowballed from there.

"I live so far out in the country that it's hard to find good players, people who you can connect with," Novoselic says. "They were doing local music. Ray does the singer-songwriter circuit, just him and a guitar. Jillian and Eric have had some other bands.

"We wasted no time. We started writing music. We didn't do covers or anything. Instead of these open jams, we started putting these songs together. And they seemed like compelling songs."

Many of those songs are informed by the scenery and ecology of Washington, intending to evoke the lower Columbia River area where Novoselic lives. And while you can't hear any complete Giants tunes without actually going to one of their shows — there are some clips from live shows on YouTube, which might give you an idea of what they sound like — Novoselic describes each song as having its own quirky personality.

"We have a diverse bag of songs," Novoselic says. "We don't hit on the same idea over and over again. We try to have poppy hooks. We've got some groovy songs, and you'll see me do some accordion playing."

That probably won't come as a surprise to Nirvana die-hards, who will already be familiar with Novoselic's accordion chops from the band's now-legendary 1993 MTV Unplugged concert.

Despite the band's homegrown flavor, Novoselic isn't opposed to the occasional high-profile gig. He is, after all, one of the most influential living rock bassists. More than two decades after Kurt Cobain's death, Novoselic collaborated with Paul McCartney and his former Nirvana bandmates Dave Grohl and Pat Smear on the Grammy-winning rock single "Cut Me Some Slack," featured in Grohl's well-received 2013 documentary film Sound City.

"I was so grateful that Paul wasn't playing bass, because he's the best bass player in the universe," Novoselic recalls of the recording session that yielded the song. "For Dave and Pat and I, the last time we played together was over 20 years before that. And we walked into this room and just picked it up again, and Paul is so good that he just fell right into it. He brought out the best of me because I wanted to rise to the occasion.

"He said, 'I found myself in the middle of a Nirvana reunion.' The old band was back in a lot of ways."

Novoselic estimates that Giants in the Trees has a dozen or so originals, which have already been put to tape. The recording process reunited Novoselic with Seattle engineer Jack Endino, who previously produced Nirvana's debut album Bleach and is, in Novoselic's words, "the godfather of grunge."

The plan is to independently release the record (which will likely be self-titled) when it's mastered, Novoselic says. One of their members may be in the Rock and Roll Hall of Fame, but the band is legitimately grassroots, and they haven't yet planned any shows outside the Northwest.

"We're trying to be local," Novoselic says. "It's a whole new world out there for music. It's kind of like newspapers. Newspapers and music are in the same boat; the digital transition has been tough. People expect free content. ... The niche is, if you can keep it local, it seems like that's a good way to connect with people. They feel that connection." ♦