Do you have the right to project your slogan on someone else's wall? 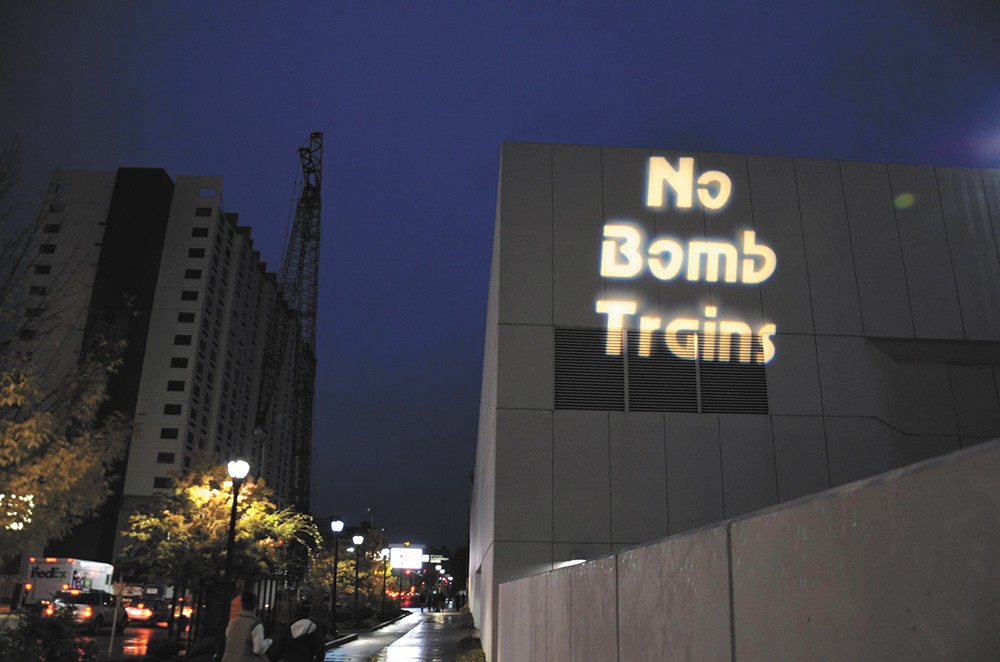 In October, Occupy Spokane protesters projected anti-oil train slogans onto the side of the Spokane Convention Center.

When Ziggy Siegfried and Valerie Waley,

two of a handful of people still active in the Occupy Spokane movement, wanted to protest oil train traffic last October, they went big. Rather than simply painting slogans on tagboard or printing them on fliers, their message was blown up across the entire wall of the Spokane Convention Center.

As the Department of Ecology held their hearings regarding oil trains at the DoubleTree hotel across the street, they could see, in giant, stenciled letters lighting up the dark, "No Bomb Trains" and "Stop Dangerous, Deadly, Explosive Oil and Coal Trains! PowerPastCoal.Org."

Employees at the Spokane Public Facilities District, which owns the Convention Center, asked Siegfried and Waley to turn off their spotlight. They refused. So when the police opted not to intervene, a PFD employee stood directly in front of their projector, blocking the image until the generator ran out of gas.

To Siegfried and Waley, that was censorship. Earlier this month, attorney Jake Brooks, representing Occupy Spokane through the Center for Justice, sent a letter to the PFD, threatening legal action unless the facilities district changed its "policies and practice that chill the Constitutional right to free speech."

But the PFD, relying on separate legal analysis, disagrees with the fundamental assumption that the PFD is a pure public institution. "This is a proprietary operation," PFD Director Kevin Twohig says. "We do not allow a facility to be used by an unaffiliated party of any kind."

There's one thing the Center for Justice and the PFD's legal analysis agree on: The legal questions pertaining to protest slogans projected onto walls remain largely unexplored by the courts.

The modern wave of light-projection activism

As Occupy Wall Streeters marched to protest the Zuccotti Park evictions on Nov. 17, 2011, activist Mark Read found a family in the high-rise housing complex willing to let him use their apartment as a staging ground.

He opened their window, set up a video projector and projected a "bat signal" of sorts onto the Verizon building across the street. A series of slogans appeared — 99%; Occupy Earth; We Are Winning — as cops and protesters scurried about below.

Since then, the tactic has spread. The Backbone Campaign, an activist support group located in Washington's King County, trains activists with "Light Projection As Protest" videos.

The group regularly sends Siegfried and Waley small stainless-steel discs with stenciled-out slogans that the Occupy Spokane group slips onto a theater spotlight and projects against walls. Other times, Waley makes her own stencils manually, cutting them out of aluminum service trays.

They've projected "Occupy Spokane" onto the Riverfront Park clock tower, "No Frack" at the Idaho Capitol in Boise, "Yes for Library" on the silos near Division Street, "Occupy Pig Out" at the Pig Out in the Park Festival, and "Don't Fast Track a Trainwreck" — a slam against the forthcoming Trans-Pacific Partnership trade agreement — on City Hall.

Mostly, they haven't had any trouble. "Any time the police do show up, they're not sure about what to do about it," Siegfried says.

In most cities, including Spokane, the issue isn't specifically addressed in ordinances. "It's certainly a major speech issue. They were standing in a traditional public forum," says attorney Brooks. "Sidewalks have traditionally been held to be a protected place."

But Stewart Jay, who teaches constitutional law at the University of Washington, suggests that building walls have no such protections.

"I would be surprised if the Supreme Court held that a city was obligated to allow its public buildings to be projection screens for messages," Jay says. He notes that the Supreme Court has upheld the right of cities to ban people from stapling fliers onto utility poles.

"The explanation was purely aesthetics — they're just ugly," Jay says. As long as the regulations are content-neutral and reasonable, public agencies can restrict the time, place and manner of speech.

In New York, Read says he initially didn't know if his video projection on the Verizon building was legal. Since then, he's had a chance to talk with many First Amendment lawyers.

"Their understanding of the law is that it's First Amendment-protected speech," he says. "It's considered free speech unless it's advertising speech... then you'd have to be in a contract with the building's owner."

After he'd been projecting for some time, he says, New York City passed stringent new permitting requirements. City code, he says, now requires him to wind his way through the complicated bureaucracy of the New York City permitting "regime" in order to clear his "outdoor projections."

"So we just ignore it," Read says. "If they want to give us a fine for the violation, that's something we're willing to [pay]."

When he projected "Americans want democracy with Iran" onto the U.S. Capitol in March, he says the projection was only up for five minutes before the police told him that, without a permit, he had to shut it down. He complied without argument.

"Don't make it a standoff with the police," Read recommends to fellow activists. "Be agile, be prepared. If you only have five minutes, you get what you need in five minutes."

After being revised in December

, the PFD's rules now clearly state that all " ...imagery... in or on the District Facilities" is subject to approval.

Last Thursday, PFD attorney Stanley Schwartz emailed the Center for Justice, explaining that he disagrees with the center's analysis of case law, but offering to meet to discuss the issue. The center plans to take him up on the offer.

Either way, Siegfried and Waley plan to continue projecting. They recently obtained an upgraded spotlight with zoom capabilities. This next week, they plan to test it out by projecting a slew of different slogans on the Federal Courthouse. The slogans, as they often do, will vary.