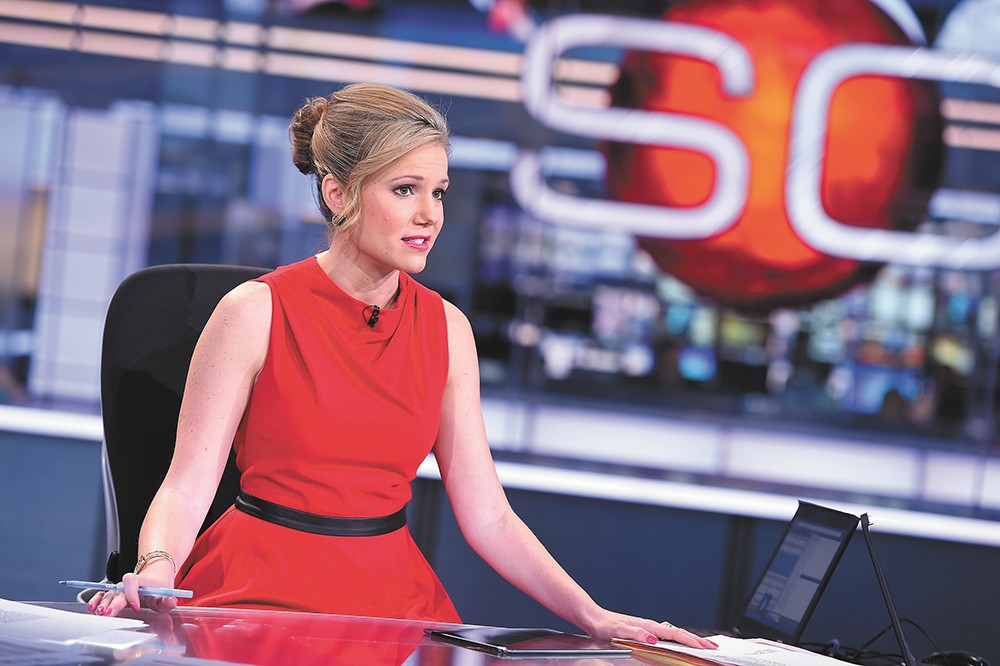 ESPN's Jaymee Sire, a WSU alum, is set to anchor SportsCenter when it goes live on Sunday morning from Hoopfest.

We take Hoopfest for granted.

For some Inland Northwesterners, it's just something you do. You practice with your team for a couple of weeks, then school gets out, and then it's Hoopfest weekend and your friends come to town. But then they go home and it's the Fourth of July. And so on.

For longer than many Hoopfest participants have been alive, the tournament has been a staple of Spokane's culture, to the point that it's not necessarily shocking when a couple of hundred thousand people descend on a downtown that's divided up into more than 450 courts for two days of non-stop basketball. Even though it should be. But our little secret is getting blown wide open this time around, when ESPN pulls its bus into town to broadcast its most popular program live from the event on Sunday.

For Hoopfest Executive Director Matt Santangelo, having SportsCenter in town doesn't change how his organization is going to present its beloved tournament, but he hopes Spokane can relish the national spotlight and show a little civic pride in the fact that a mid-sized city puts on such a massive tournament.

"When you look at Phoenix or L.A. or Portland, they've tried to have three-on-three tournaments, but they're nothing like what we have," says the former Gonzaga point guard. "We should be proud of that, and especially because of the reliance on thousands of volunteers."

The arrival in Spokane is part of SportsCenter's On the Road Summer series that takes the sports show of record across the nation to more out-of-the box events that the program typically wouldn't cover. Hoopfest is the first stop, but the following weekend will see the show going live from the Nathan's International Hot Dog Eating Contest in Coney Island, New York. Then they're off to the World Championships of Cornhole in Knoxville, Tennessee, before hitting up the National Horseshoe Pitchers Association World Tournament in Topeka, Kansas.

"We were looking at various events to find little slices of Americana, and what struck us about Hoopfest was the magnitude. You've got 40 city blocks and 7,000 teams, which is incredible," says Jim Bowdon, a coordinating producer for the traveling component of SportsCenter.

If you've seen ESPN's College GameDay or their other remote SportsCenter broadcasts, you know a bit of what to expect — and you're probably also keen to the fact that you have a chance to be on national television. The broadcast starts early (7 am), but if you're at the corner of Stevens Street and Spokane Falls Boulevard, you can crowd behind the set and be seen the world over.

Bowdon and his crew chose this particular spot when he visited town earlier this spring because of its vantage point. They want to show the enormity of the tournament, and will go as far as to mount cameras atop nearby buildings to get the shots they need.

Having never been to the event, Bowdon received a lengthy and glowing description of Hoopfest a couple of weeks ago at the NBA Finals from former Seattle SuperSonics head coach and current sportscaster P.J. Carlesimo.

"He just kept telling me that it's not just the size that makes it special, but also that people really care about it," says Bowdon, who adds that features shot during the weekend are set to appear during Sunday's telecast, one of which is a piece about John and David Stockton.

For SportsCenter host Jaymee Sire, the trip to Hoopfest is a trip home, or at least close to home. The Washington State University alum who grew up in Great Falls, Montana, has fond memories of coming up to Spokane during her college days. After a career reporting sports for network affiliates and cable sports networks, she landed at ESPN in 2013. She knows that ESPN could stay in the studio, just play highlights and commentary and do just fine ratings-wise, but she says there's a sense of innovation at the network that brings them to things like Hoopfest.

"Nowadays, SportsCenter is on every single hour of the day, and 18 of those hours we're live," Sire says. "We're always asking ourselves, 'What can we do differently?' Sports are supposed to be fun, and the more fun we can make it — whether it's going out on the road or adding more offbeat stuff — makes us better and in tune with our viewers."

Having the leading name in sports in town for his second Hoopfest at the helm has gotten Santangelo thinking more about what the event means to a city that has a professed love for basketball. It's not just Gonzaga's success, he says, that makes this a great basketball city, and it's not just Hoopfest that has lined the residential streets of Spokane with one hoop after another. It's some combination of all of that, he says, and now people are going to know that Spokane's love of basketball doesn't end at the doors of the Kennel.

"Sure, Spokane might not necessarily be a hotbed of talent, but it's a place that loves basketball," he says. "And the expression of that comes at Hoopfest." ♦