In their first movie in 30 years, Bill and Ted deliver the message of kindness we most definitely need right now 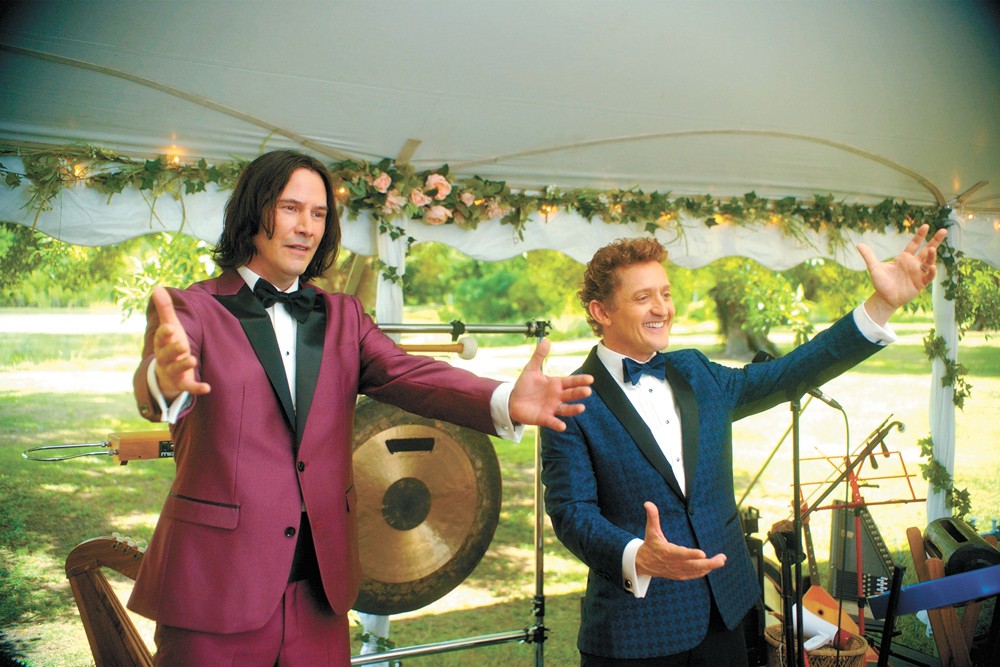 One of the more unlikely franchises of the '80s and '90s involved two lovable, heavy metal-obsessed losers who fell backwards into being saviors of the universe. Bill S. Preston, Esq. (Alex Winter) and "Ted" Theodore Logan (Keanu Reeves) first hopped into their time-traveling phone booth in 1989's Bill & Ted's Excellent Adventure, and again in 1991's Bill & Ted's Bogus Journey. It was as if the Jeff Spicoli character from Fast Times at Ridgemont High cloned himself, and then got stuck in Back to the Future.

And now Reeves and Winter have returned for the new feature Bill & Ted Face the Music, and there's something comforting about checking back in on these guys and discovering they're still the same. It's been nearly 30 years since we've seen them last, and since then, Bill and Ted's band Wyld Stallyns has burned out. Now they live next door to each other at the end of a cul-de-sac, married to the medieval princesses they met in the first film, raising teenage daughters that are just like them, and trying to revitalize their musical career with a more experimental sound.

Into their suburban malaise comes Kelly (Kristen Schaal), the daughter of George Carlin's time travel guru Rufus, who issues a warning: Bill and Ted had been prophesied to write a song that would unite the world, but they've yet to produce it. They only have a matter of hours to finish the song, or the fabric of space and time will be ripped apart completely.

So Bill and Ted try to track down themselves in the future, hoping to find a finished version of this fabled song, and they stumble upon different permutations of themselves — as failed open-mic performers, as foppish rock stars with fake British accents, as roided-up prison inmates, as old men in neighboring nursing home beds. They also reunite with Death (the always welcome William Sadler), who played with Wyld Stallyns for years but left on rocky terms. Meanwhile, Bill and Ted's daughters (well played by Brigette Lundy-Paine and Samara Weaving) take on the roles of their dads from the first film, hopping about in time to recruit long-dead musicians — Jimi Hendrix, Louis Armstrong, Mozart — to form the most bodacious band in history.

It's sort of surprising that we're still enamored of Bill and Ted. Excellent Adventure was made on the cheap, and its release was delayed for nearly two years due to a studio bankruptcy. But it was an unexpected hit with audiences, and it spawned not only its big-screen sequels but a Nintendo game, a comic book and two TV spin-offs.

Bill and Ted's daughters grab Kid Cudi to help save the day.

Perhaps one of the great things about the Bill & Ted franchise is that each of the three films has built on the lore of previous ones while also working as standalone entities. Sure, they all follow the same basic formula — the lovable lunkheads are unstuck in time, zipping around between different historical eras and universes — but the overarching themes and styles differ from film to film. Excellent Adventure is the modest introduction, a low-budget teen comedy that plays around with history, while Bogus Journey is a more ambitious supernatural romp that even drops our heroes into the underworld (the original title, Bill & Ted Go to Hell, wasn't considered marketable enough).

Face the Music, then, is the series' midlife crisis movie: Bill and Ted wonder if they're too old and washed up to keep coasting on the surfer-dude rock-star persona, and in between their interdimensional adventures they grapple with problems in their marriages and worry about their kids having comfortable futures.

The variety of the Bill & Ted series goes to show you that more movie sequels should break free from the prescribed rules of their predecessors, rather than regurgitating the same surefire formula. Look at 1979's Alien, a stark thriller with artsy design, and compare it to its follow-up Aliens (1986), which is a frenetic blood-and-guts shoot-'em-up. Or the Mad Max series: Despite existing in the same universe, each film embraces its own unique style. And although they've been rebooted over the years by different creative bodies, the James Bond and Planet of the Apes movies have the same appeal — you don't necessarily know what you're going to get each time.

The Bill & Ted movies may not be held in the same esteem as any of those properties, but they operate on the same screwy frequencies. It's one of the reasons they've aged so well, as is the sheer irrepressible positivity of Bill and Ted themselves. Even in the face of most certain calamity, there's never any concern that everything won't turn out OK. Their stupidity is their greatest superpower, in a way, because they never take the time to second-guess themselves.

As for Bill & Ted Face the Music, it's obviously missing the novelty of its predecessors, and it feels more like a Netflix original movie than something you'd head to the theater to see in non-COVID times. It's easily the least of the three films, but it's sweet and harmless and fun, and it's sort of refreshing to see a major studio movie that advocates for little more than simply being nice. After all, we still need to be excellent to each other, especially now. ♦

The original print version of this article was headlined "Still Excellent"