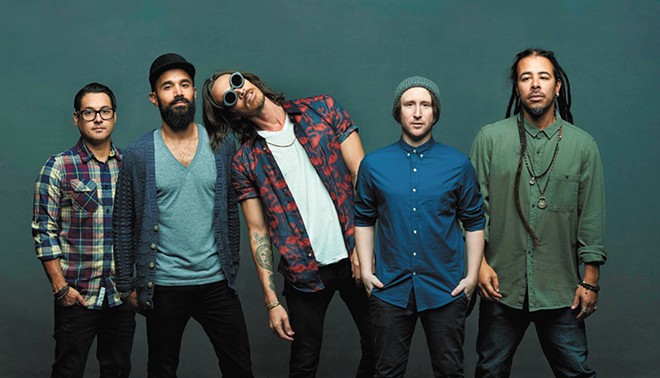 It's not exactly rocket S.C.I.E.N.C.E.: Incubus still knows how to work a stage.

As we recently opined, all things '90s are back with a vengeance as America wallows in a bottomless pool of nostalgia. And given how our pop-culture cycle moves in fast-forward these days, we imagine it won't be long before another wave of familiar bands starts cashing in on our collective inability to embrace anything new.

It's probably already here. Case in point: Alt-rock band Incubus is touring to support its eighth studio album — the appropriately titled 8, released earlier this year — and they're playing Northern Quest Resort & Casino next week. You read that right: Incubus is on the casino circuit now, right alongside Joan Jett, Styx and an endless stream of AC/DC cover bands.

Despite the new album, it's probably fair to categorize Incubus as a legacy act, having enjoyed its heyday around the turn of the millenium. The L.A.-based outfit hit it big with 1999's Make Yourself, an album that included the high-charting single "Drive," and followed it up with the 2001 album Morning View, which went double-platinum thanks to the success of the singles "Wish You Were Here" and "Nice to Know You."

If you, like me, were a teenaged boy around that time, you probably downloaded Incubus' music via some defunct file-sharing service like LimeWire and rocked it through crappy PC speakers while jacking pixelated taxis in Grand Theft Auto 3. (Was that too specific?) The point is, Incubus occupies a special place in the hearts of many suburban kids who are grown up now and shocked that Incubus is getting old, and so are we, and that we're increasingly becoming a target demographic for a new generation of bands past their prime. After all, Incubus' Light Grenades, which I considered a comeback album at the time, dropped more than 12 (!) years ago.

This all sunk in for me over Memorial Day weekend at BottleRock Napa Valley, a music, wine and food festival held amid the vineyards of Northern California. The festival itself was basically one big nostalgia party. Two of this year's headliners — the Killers and Muse — have been playing prominent slots at festivals all over the world for well over a decade, and the down-bill performers included Billy Idol and Snoop Dogg. ("Gin and Juice," anyone?) If not for BottleRock's closing-night headliner, Bruno Mars, this might as well have been a lineup from 2008.

Incubus took the main stage before Muse on the first night of the festival. Frontman Brandon Boyd still appeared lean and fit, his dark shoulder-length hair streaked white. His voice is every bit as strong as it was in 2001, soaring on hits like "Anna Molly" and new single "Nimble Bastard."

The show demonstrated that Incubus is very much a product of the late 1990s/early 2000s. They cut out a niche by playing sort-of-heavy radio rock that was actually palatable, and earning bonus points for not being Creed. They dabbled but didn't wade deep enough in the nu-metal swamp to get stuck in the muck with bands like Korn, Limp Bizkit and Kid Rock. (However, they still employ DJ Kilmore to scratch turntables, a clear holdover from that era.) There's a hint of Southern California punk-rock in there as well, and they share deep funk roots with another L.A. rock band, Red Hot Chili Peppers. Like RHCP, Incubus is stacked with virtuosos capable of playing stuff far more technical than what most of their songs demand.

That technicality was on display all night in Napa. Incubus is, in fact, a kick-ass live band that isn't afraid to bang out messy power chords in this age of computer-perfect sets, or throw avant-garde jam-outs into the middle of otherwise straightforward radio-rock songs. For me, the highlight of the evening came when the band blended its 2001 hit "Wish You Were Here" into a brief cover of Pink Floyd's song of the same title. The pairing makes a surprising amount of sense: Though the songs aren't sonically similar, both carry a resonant emotional weight.

I hate to admit it, but the songs made me ache for people and places that are gone. Incubus made me feel that way when I was a teenager, and that tends to hit harder. I guess that makes me a sucker for nostalgia like everyone else. ♦