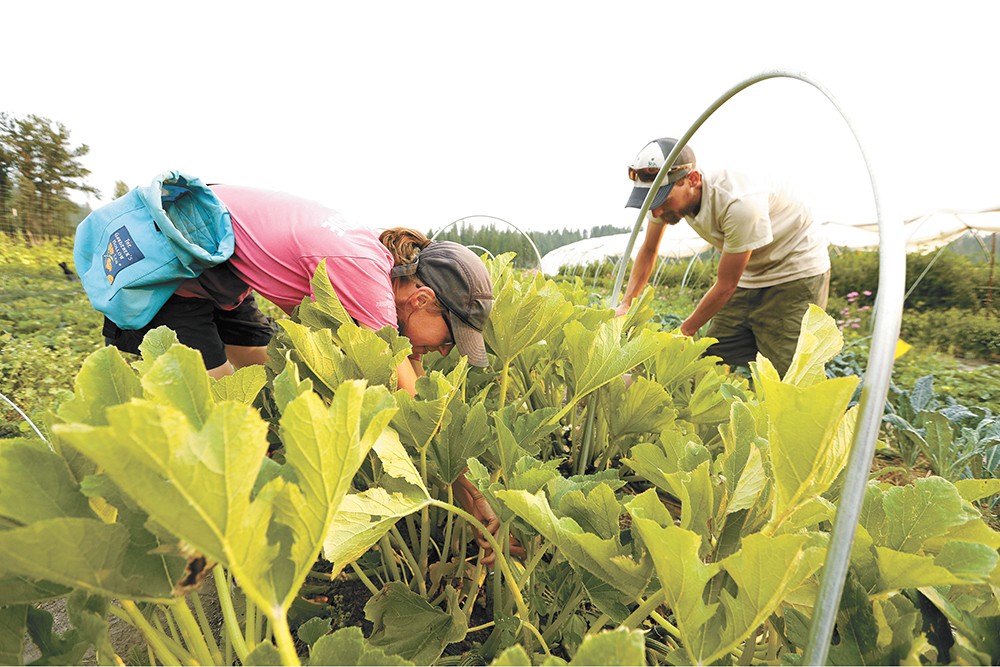 Six years ago and at 220 pounds on his thin frame, Ryan Herring was feeling the effects of junk food and his sedentary lifestyle. He changed his eating habits, tried growing his own food and failed. That initial gardening failure, however, led to an epiphany: Herring's health and that of his soil were actually connected.

Since then, Herring has lost weight, learned to grow his own food and continues to study soil on an increasingly deep level. First, he earned Spokane County's Master Gardeners Master Composter Certificate, reckoning that composting would help restore necessary organic matter to his soil, which in turn would yield more and better plants. The plan worked.

Next, he got into biodynamics, a holistic and ecological approach to farming, food and nutrition, and secured a Permaculture Design Certificate, which also emphasizes living in harmony with nature.

Somewhere along the way, Herring discovered the somewhat esoteric Korean natural farming method. The technique is credited to Cho Han Kyu, a South Korean who in the 1960s studied Japanese no-till farming techniques eschewing conventional pesticides and fertilizers. Cho experimented on his family's farm in Korea, added components like fermented plant juices, and created a litany of processes that worked with natural organisms in the soil to deter pests and sustain crops.

Instead of killing weeds, for example, these unwanted plants can be converted into a beneficial plant juice, like the one Marcus Intinarelli and Becca Woollett employ at their Thompson Creek Farm in Newman Lake.

The farming duo make fermented plant juice from what they have on their property — sorrel, clover, dandelion, hawthorn, raspberry, blackberry, horsetail — and spray it on certain plants to aid growth and help prevent disease. They also make and spray fermented fruit juices on fruit-bearing plants at specific times in the growing cycle to promote flowering and fruiting.

"If you can get to the point where you are making all your inputs yourself from locally available materials, then it's a fully self-sustaining farm, which to us is the most sustainable a farm can be," says Intinarelli, whose background in environmental studies and philosophy led him to explore sustainable farming.

Intinarelli learned about Korean natural farming two years ago from Herring, who's a member of the Inland Northwest Natural Farming Association and has been leading a monthly meetup on the practice at Washington State University's Spokane County Extension since early spring.

What is soil? The U.S. Department of Agriculture defines it as "unconsolidated mineral or organic material." Minerals in soil include iron and potassium, which plants need in varying quantities. Organic matter, which helps with water retention and feeding of plants, includes nonliving things like decomposing animals and plants that give soil its fertility. It also includes living things like worms, as well as bacteria and fungi like yeast, molds and mushrooms, collectively known in natural farming as indigenous microorganisms, or IMO for short. "IMO is the backbone of [natural farming]," Herring says.

While composting can be good at increasing soil's organic matter and presence of beneficial bacteria, natural farming helps increase growth of fungi, yeast and mold, and in maintaining healthy soil's necessary microbial diversity.

Think of IMO like bread "starter," says Herring. Unlike commercial additives, it can't be purchased, because what works for one region will not necessarily work for another. Instead, it must be grown from something.

To do that, healthy soil is gathered from nearby forested areas that's sure to contain various fungi, which aid in decomposition. The soil is then "fed" through a series of protocols — Intinarelli creates a kind of soil slurry and feeds it boiled potatoes — and strengthened to encourage the reproduction of those beneficial microbes.

"The microbes give us that healthy soil-plant relationship that is so crucial to farming," Intinarelli explains. "If you have a few dominant microbes in your soil and those microbes are not beneficial or somewhat neutral, then most likely your plants will not do so well."

In a process Herring describes as "biological transplanting," the IMO is spread onto a farm "so that [its] biology is established throughout the farm and becomes a perpetual part of the living complex of the soil."

The integration of IMO is flexible, and can be scaled up or down depending on a farmer's need or the size of a growing area, Herring notes.

"It also builds a soil food web that is already indigenous to your climate, resilient to the types of conditions that exist in your area," he says, adding that it also helps soil "withstand drought and shares symbiotic relationships to the native plants that grow well in your area."

During a natural farming meetup led by Herring in May, participants get a hands-on opportunity to work with an IMO. As Herring directs, several people mix ingredients from a formula he writes on a whiteboard: oats, brown rice vinegar, water, fermented plant juice and more. Participants create a small mound of the mixture, which contains IMO made during a previous meetup.

Next they pile the goopy mixture on the ground in the Extension's composting area, and cover it with leaf litter. Ideally, this pile will heat up as the organic matter breaks down over several days, similar to compost, at which time it will be turned, mixed with more soil and repeated as the IMO feed, multiply and spread.

As they work, attendees pepper Herring with questions about natural farming, to which he responds with things like "figure out what works" or "it's your choice."

That's some of Herring's background in permaculture shining through, which is a mindset about observing one's actions and living in harmony with the land. It's not incompatible with natural farming, he says.

"The only way to ensure you are getting what you want, is to know your farmer, know their practices and how they produce the goods you are utilizing." ♦

The original print version of this article was headlined "Only Natural"