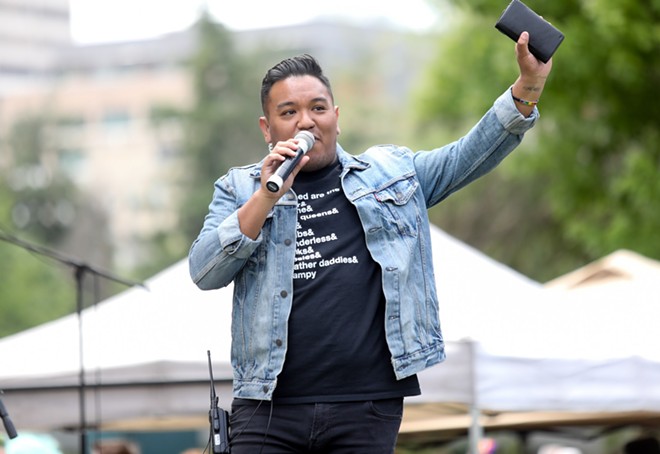 Tell me if you’ve heard this one before: It’s been a rough couple years putting on large communal events. It’s almost like there’s been a pandemic or something.

Spokane Pride is one of the organizations that’s struggled with how to re-imagine its yearly celebration of the LGBTQIA+ community while keeping everyone safe and healthy. It’s important to stay an active visual part of the city’s cultural tapestry, but the traditional hordes of the traditional parade did not make logistical sense.

So Spokane Pride president and CEO Esteban Herevia and his team have turned the people into the paraders. Spokane Pride 2021 will be a drive-thru festival and car parade held in the Spokane Arena parking lot this Saturday, Oct. 9, from 4-8 pm.

In anticipation of Spokane Pride 2021, we chatted with Herevia about what a drive-thru Pride parade looks like, blending drag performances and Disney's "It’s a Small World" ride, and what the event means to Spokane as a whole.

INLANDER: After all the complications in planning Pride during a pandemic over the past two years, what’s your general mindset heading into Spokane Pride 2021?

Estaban Herevia: I mean, obviously, safety is our No. 1 priority. Hospitals are full. Nurses and doctors are tired. And so we don't want to be the reason why we continue to overload our system.

On the other hand, Hoopfest canceled, Bloomsday switched, Pig Out in the Park was different. Canceling wasn't a choice. We could not do that. So we put our heads together, we put our brains together, and we really did think as a board, as an organization, and we consulted a lot of folks. And we said what is going to be the safest and best way we can do this?

And so that’s how this car parade came to mind.

So for people who might not be able to envision what Pride as a car parade means, what will that look like?

So think "It’s a Small World"-meets-Christmas Tree Lane or a Festival of Lights. That's kind of the feel of the vibes. You're going to be [driving] through, and there are going to be people on either side of you cheering you on with community resources or different vendors or in this case... llamas.

There're going to be a lot of llamas. (Laughs)

So really, it's our community coming together to still support each other. But instead of it being face-to-face in-person, it’ll just be in cars driving by.

What’s sort of the mechanism for making that work with booths and food trucks?

Our booths will be alongside the car parade route. So any of the resources, any of the vendors, you'll be able to interact with them from your car. We ask that folks don't get out just to minimize contacts between people. We understand that we're outdoors, we understand that folks will still be wearing masks, but we really want to take that extra level of precaution. That's kind of stage one.

Stage two is that we'll actually have a vaccine clinic, HIV testing and voter registration [on-site]. And at those three stations, folks will get out of their cars, get tested, get vaccinated, and registered to vote. We know how high-touch those are, and it's also trained professionals administering those [services]. So we feel more comfortable allowing folks out of their cars to at least do those pieces.

The final stage is the food trucks. Just think of it as an outdoor food court with distancing. We've got some of the best food trucks in Spokane showing up for us. We've got Skewers, which is the Mediterranean/Middle Eastern cuisine. We've got Mixed Plate, which there's tacos and rice bowls. We have Big Rod’s Texas BBQ food truck, which is just so freakin’ good. And then we have Gypsy Java Coffee and Teas for our friends who need a little pick-me-up in the afternoon or evening.

How will the entertainers and performers be presented?

Well I told you that the inspiration or the feeling was like "It's a Small World," so it'll be one soundtrack being played throughout the night. And we will have the drag queens kind of go-going dancing to the soundtrack. It'll feature drag queens from all the different performance venues from across the region, so there'll be a wide range of performers throughout the night. It’ll be different performers every hour. Really, the idea is: How can we give you the most succinct and concise experience that everybody gets access to the entire evening long?

Are there other parts of the even you’re looking forward to that we haven’t touched on yet?

What do you feel is the importance to Pride as part of the bigger Spokane cultural community?

Well, not a lot of folks know this, but next year we're celebrating our 30th anniversary. So we've been at this for a while. And if nothing else, our visibility and maintaining pride in ourselves, in our community, in our identities — right now, that's the most radical thing that we can do. And Pride is the most visible way that we can do it.

We are seeing more anti-trans legislation being proposed, now more than ever. We're seeing an imposition on women's rights. We are seeing a number of pieces of targeted hate, and also legislation being proposed against folks who are immigrants or who are undocumented. And the reality is anybody can be LGBTQ+, right? It’s not one specific group of people. Really being LGBTQ+ encompasses every type of body, every type of person. And so we understand, and we realized that to cancel or to not maintain that visibility this year… well... we've got to keep the story going in any way possible.

After having to bump Pride to October because of COVID, is that going to be the schedule going forward or are you going to try to get it back to being a summer event?

Our goal is to go back to our traditional date, which is the second Saturday of every June. And so that'll be Saturday, June 11, 2022. That’s when we'll hopefully be marching through the streets of Spokane again.

We're still short of our financial goal. We're about $2,000-$3,000 short from where we want to be. So if folks are inclined to give, if they visit our website, we'd appreciate any gift. And also if you want to volunteer or register a booth, that would also be super awesome.

Seth Sommerfeld is a staff writer and Music Editor for The Inlander, and an alumnus of Gonzaga University.
More