pokane artistic non-profit Terrain has carved out a unique space in the local creative community through its titular flagship event, the art fairs Bazaar and Brrrzaar, its local-centric From Here store in Rive Park Square, the Terrain Gallery, collaborations with organizations like Spokane Symphony, and much more.

To preview Terrain X's launch, we chatted with Terrain co-founder and Executive Director Ginger Ewing about what led to the line, the dream for the label going forward, and other great local places to do holiday shopping.

What was the original spark that led to launching a Terrain appeal and accessories line?

We've actually been dreaming about finding ways to commission local artists to create an apparel line for several years now. And we've always kind of envisioned it having those items featured in our big annual flagship event that we do.

But we opened up a storefront (From Here), gosh, almost four years ago now. And one of the things that we were observing was that people really wanted Spokane-branded items. They literally fly off of our shelves. People come to us specifically just for Spokane-branded items. The reason why we decided start the [Terrain X] launch with Spokane-themed items was because of the feedback that we get from customers. And so we thought that it might be a real opportunity — now that we have a storefront that's open seven days a week — to bring this apparel line to fruition.

What are some of your personal favorite items in this initial drop?

Well, I love them all, of course. They are my children. [laughs] They're all great in different ways, and I know that's kind of a cliche, stupid answer, but it's true.

One of the things that I like about the line is that there's multiple entry points for different people. So with Terrain, we really try to be as accessible to as many people as possible no matter what we do. So you can get anything from a $5 sticker, a $10 enamel pin, to a $60 sweatshirt. So we tried to be really mindful and thoughtful about that.

Jiemei Lin shows off one of her Terrain X T-shirt designs
Another thing that I love about the line is that we the only parameter we gave artists is that it needed to be Spokane-centric. So when you're looking at Karli Ingersoll sweatshirt, you are seeing Karli Ingersoll as an artist. It's not her trying to create something that isn't authentically her. Jiemei Lin has a similar story. A lot of the reoccurring themes that you see in Jiemei's work, just in general, [centers] around identity, around what it means to be a female-identifying-person, motherhood. In her items, you see those things reflected in a really beautiful way.

There's cultural diversity within the items as well, both in terms of the cultural identities of the artists that are a part of the initial launch and also in who is represented in the work. So for example, in Jiemei's work, you see an Asian woman, you see a Black woman, you see a hijab-wearing woman. You see the different kinds of people who live in and love Spokane reflected in those items. For me, that's really, really exciting.


So you don't have a favorite, but you're most likely to be spotted in public wearing the beanie.

How did you select the initial crop of Terrain X artists and do you have plans to work with others going forward?

So we actually already have two additional artists in the pipeline, who were working on things that just aren't going to be ready in time for the launch.

Even though we've been thinking about [Terrain X] for a really long time, when we started actually physically working on this, it was a pretty tight turnaround. So we chose artists who are recognizable in the community, but also who we knew had designed or done items like this before. So they had that skill set. I mean, you can be this really incredible artist, but you've never done a T-shirt design or you've never done a sock design. So choosing people who have those skill sets, especially with his tight turnaround, was key for us.

Again, we also wanted to be kind of diverse in who was representing both in terms of cultural identity, but also in terms of artistic style. Making sure we're kind of trying to create as many things that will appeal to as many people different people as possible.

Beyond From Here, what are some of your favorite local holiday shopping spots?

I would be remiss to not also mentioned Brrrzaar, which is coming up (on December 18). That is our [Terrain] event where we have 72 local artists who are going to be selling at that event.

Are there other Terrain-related or tangential events coming up that you're excited about?

One thing that I'm excited about – it's not quite announced yet – but Lucky You Lounge is going to be bringing back their beloved Christmas show that happened at The Bartlett for many years. That's going to be happening December 18, which is the same day as Brrrzaar. So I think that's always kind of a fun holiday event that highlights local musicians, which is super fun.

Saranac Art Projects always does a small work show in December. And so they have reasonably priced original artworks for sale.

Trackside Studio always has a show called Cup of Joy. It is mugs that you can buy, that are super high quality, really beautiful, and make really amazing holiday guests. So those are a couple other ways to kind of engage with the local art community during the holiday season. Karli Ingersoll in her Terrain X sweatshirt design
Is there anything else you'd like to add?

If [the initial Terrain X] lines do really well, our dream is to be able to have just an artist-designed clothing and accessories line [that doesn't just only make Spokane-branded merch]. I think it'll be a really incredible way show show off the artists of our community.

I would be remiss if I did not mention Giant Guerrilla, which is a small pinter here in town, Devin Corbit. He's been doing a lot of the hand-printing of these particular items. And same with Bison Printing, which is a part of The Great PNW. They are the two folks that are actually producing these items in tandem with the artists and working with the artists to bring them to fruition. In fact, one of the artists that we're working with Josh Wing, he works for Bison Printing. Joel Barbour from The Great PNW was a good mentor to us throughout this process. And so it's also really exciting to be able to support local printers and local suppliers in that way. And it's been a really super collaborative experience. We're just honored and blessed and excited to be able to work with so many creative people throughout the process. 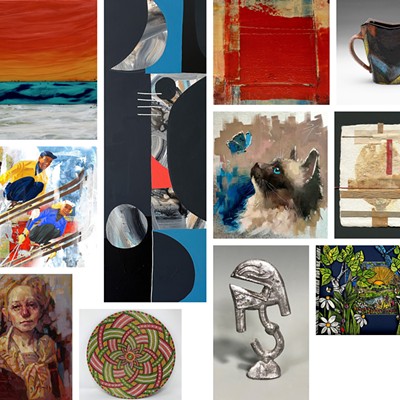