Ayad Akhtar's Disgraced steps into the bramble of race and identity, exposing complexity and contradictions 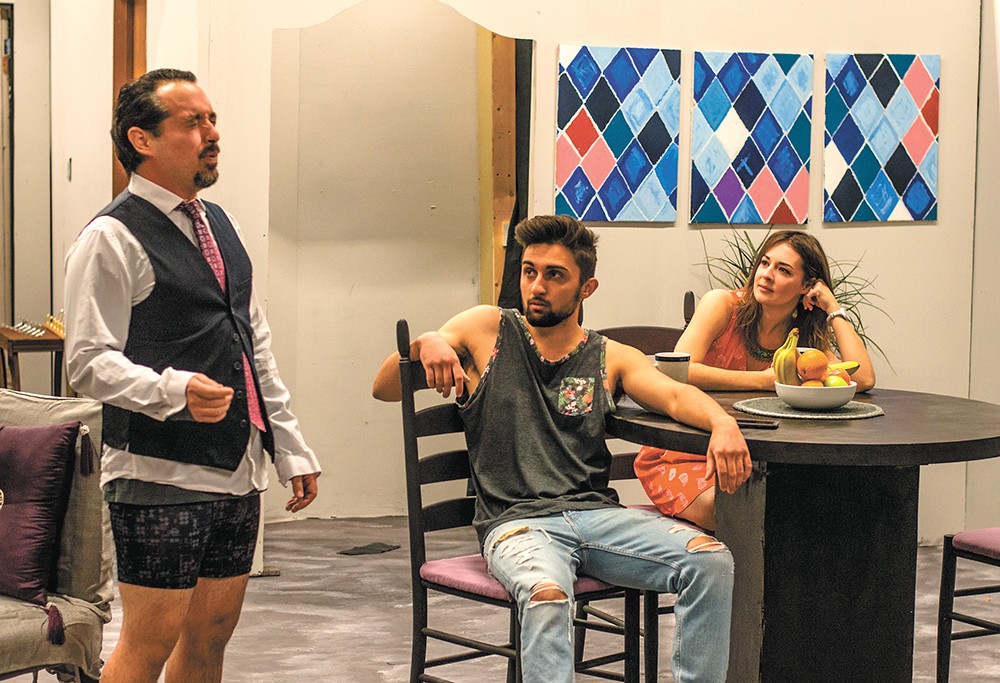 Paradoxically, the more that race appears as a recurring thread in the stories that dominate our information-saturated age,

the more difficult it's become to talk about it candidly. Extant institutionalized racism and the resultant identity politics have polarized and stifled discussion to the point that everyone's motives are deemed suspect, and acknowledging the validity of any counterpoint feels like a surrender to one tyranny of thought or another.

To appreciate just how anguished the issue of race continues to be, few ways are more satisfyingly inconclusive than 90 uninterrupted minutes in the company of the five characters in Ayad Akhtar's Disgraced, which is about to wrap up a three-week run at Stage Left Theater under the direction of Lance Babbitt.

Akhtar writes with the firsthand experience of an American of Pakistani descent, yet his attitude toward his own cultural and religious heritage — loosely embodied and vocalized by Amir Kapoor, played here by Joe Mazzie — isn't without ambivalence. It's tempting to say that Akhtar's approach is impartial, but if Disgraced settles on any single idea, it's that our views on race, however narrow or inclusive, are never entirely unclouded. They're forged by the arbitrariness of individual experience, warped by emotion, distorted by centuries of antipathy, suspicion and prejudice. And that applies as much to Amir and his cousin Hussein (aka Abe, played by Jared Johnson) as it does the play's white, black and Jewish characters.

Our first glimpse of Amir finds him in a suit jacket and underpants, an unflattering getup for an affluent corporate lawyer. He's reluctantly posing for his wife Emily (Aubrey Shimek Davis), an ascendant artist whose Islamic-inspired art adorns the walls of their swanky New York apartment. She's painting Amir as an homage to Diego Velázquez's Portrait of Juan de Pareja; the subject, as explained through Akhtar's occasionally didactic dialogue, was the 17th-century artist's Moorish assistant and slave.

Amir's incongruous attire, the couple's uneven dynamic, the nature of the portrait and Emily's "orientalism" — everything in this opening scene is teeming with a significance that will ultimately erupt, along with many other long-simmering resentments and confessions — during the Kapoors' dinner party with Isaac (Robert John Hodge) and his wife Jory (Alyssa Jordan). Like Yasmina Reza's God of Carnage, which had a local run two years ago, Disgraced uses haute cuisine and other totems of cultural sophistication to create a superficial veneer of civility, which it then shatters to expose the biases smoldering beneath. How exactly Akhtar's 2012 play builds and unleashes that tension without tipping into a pretentious, politically correct morality tale is what makes it so riveting.

As Amir, Mazzie comes off as too timid to seem credible as a big-city attorney with any reasonable expectation of being made a partner at his firm. He and Johnson don't always project or enunciate as well as they should, either, muffling key lines of dialogue. Hodge affects a cool, supercilious delivery that works well until things become heated. Both Shimek Davis and Jordan are excellent, convincing and natural not only as distinct individuals in their own right but also as flawed spouses to flawed men. Although this production of Disgraced has its share of flaws as well, it still illuminates the powerful seductions and contradictions of race and identity without diminishing their complexity. ♦

J. Casey Doyle: Where the Air is Clear @ Terrain Gallery