Insane Clown Posse’s tour pairs them with an all-girl death metal band, a ’90s rapper and a band of weed-smokers. Why, God, why? 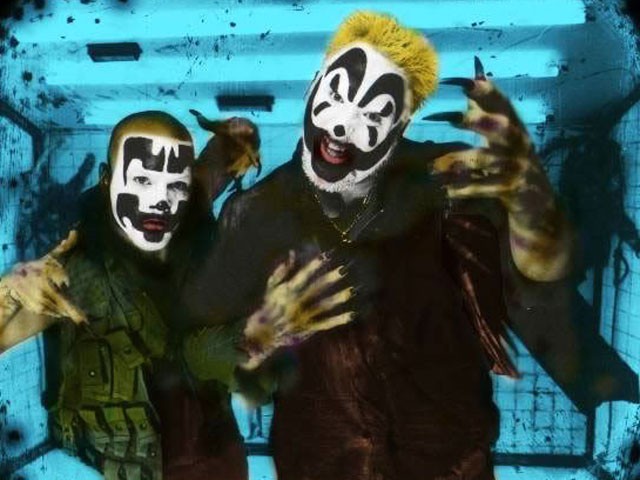 Insane Clown Posse is coming again. This should not be a surprise. What may be a shocker, though, is who they’re bringing on tour with them — not other Psychopathic Records artists, but a string of totally oddball openers.

There’s Kittie, an all-girl nu-metal band from Canada who got popular in the mid-’90s and who I had no idea still existed. Then Kottonmouth Kings: a California-grown weed-rap posse beloved by the High Times crowd. And lastly — this one’s the real kicker — Coolio. The “Gangsta’s Paradise” rapper with kooky hair, known lately for his appearances on has-been catch-all shows like Celebrity Big Brother and Celebrity Fear Factor and his arrest last year for possession of crack cocaine. So we tried to connect the dots: What, if anything, do these artists have in common?

Here’s how we tried to figure it out — and it’s kinda looking like they all just share a love for munchies.

ICP: Raps about cannibalism on “Dead Body Man”: “I ate a dead body, I ain’t proud of it / I told you all about it, and you all applauded.”

ICP: Over-the-top raunchy. Sings songs about their scrotums on “Bugs on My Nuts.”

Coolio: Sings the song “Hand on My Nutsac.”

Kittie: Sings about male genitalia on “Spit” and “Get Off”… but not in a good way.

ICP: Claims their music is completely ironic. But it kinda feels serious…

Kittie: Seems ironic, or else these are some seriously crazy bitches.

ICP: Has a love for junk food: see songs “Cotton Candy” and “Cotton Candy & Popsicles,” and the group ritually sprays down fans with Faygo, a Detroit-made soda.

Kottonmouth Kings: Sings about snacks on “The Munchies:” “Cherry Icees, Whatchamacallits, Twizzlers, Bubbalicious, nachos and chili dogs/ (I got the munchies) / Hostess fruit pies and cupcakes/ Twinkies, Zingers, crumb doughnuts with some Kool-Aid” … you get the idea.

Coolio: Specializes in cheap and easy recipes on his online cooking show, “Cookin’ With Coolio.” Quoted as saying, “Hell, when I was growing up, I could make a meal out of a package of Top Ramen and a bottle of Windex.”

Coolio: Calls himself a “Kitchen Pimp,” on “Cookin’ With Coolio.”

Coolio: Arrested for crack cocaine in 2009.

ICP: Without the wicked clown motif, there would be no ICP.