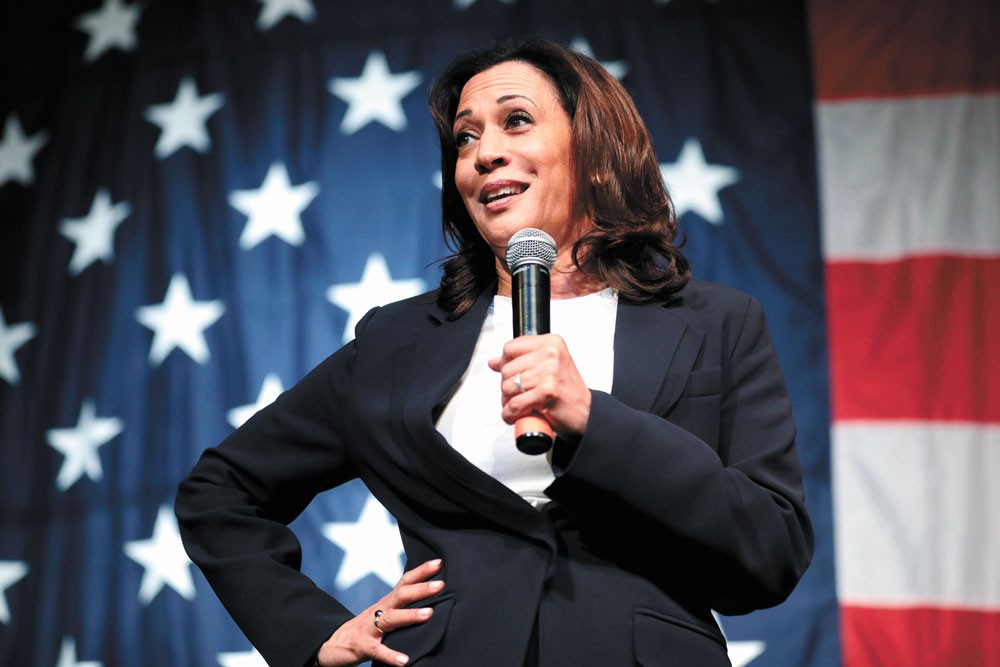 Gage Skidmore photo
Sen. Kamala Harris of California is the first woman of color to be part of a major U.S. political party's national ticket.

The Democratic National Convention made history last month when its delegates nominated Sen. Kamala Harris of California as its vice presidential candidate. Harris is the first woman of color to be part of a major U.S. political party's national ticket, alongside presidential nominee former Vice President Joseph Biden of Delaware.

For many, this is a moment to be celebrated as a sign that American politics is beginning to catch up with the increasingly multiracial composition of 21st century U.S. society. But several Republican politicians and pundits raised questions about Harris' racial heritage. Her father was born in Jamaica, and her mother in India. Despite Harris being born in Oakland, California (and qualifying for birthright citizenship under the 14th Amendment), President Trump promoted a discredited conspiracy theory that falsely claims that Harris is not a U.S. citizen and is, therefore, ineligible to run for vice president because her parents were not naturalized citizens at the time of her birth.

While Trump's chief of staff Mark Meadows later admitted that there is no question that Harris is eligible to run, other Republican zealots have chosen to attack the authenticity of the senator's racial heritage. Conscious of their own poor standing among African-American voters, Republicans claim that Harris does not qualify as the first "African-American" woman to run for vice president because her father grew up in Jamaica, rather than in the United States. Indeed, the Republican pseudointellectual, and Trump-pardoned felon, Dinesh D'Souza bent the historical record to his political will by claiming that Harris' descent from a Jamaican slave owner meant that she was on the side of the oppressor, rather than the oppressed.

Even if we were to ignore Harris' life experiences as woman of color in 20th and 21st century America, it is ludicrous to suggest that Afro-Caribbean people have not lived under similar systems of racial oppression to African-Americans. Indeed, the development of race-based, intergenerational chattel slavery (meaning that slaves are property, rather than people) first emerged in Caribbean sugar colonies like Barbados and Jamaica, before shaping the development of slavery in places like Virginia and, even, New England during the 1600s.

The brutal, repetitive rhythm of the slave ships that carried captured Africans from West Africa to plantations in the Americas distributed enslaved people from Barbados to the Chesapeake. Prevailing winds brought the ships to the Caribbean first, before continuing north to the Carolinas, Virginia and Maryland. The same ships that brought Harris' ancestors to Jamaica also carried enslaved peoples to America.

Harris' ancestry also reveals a common experience of sexual violence perpetrated by White men against Black women. She is a descendent of a Jamaican slave owner because he raped one of her female ancestors. Violence was an essential part of plantation slavery and rape was a frequent tool used by White slaveowners to demonstrate their power over the people they had enslaved. From his extensive diaries, we know that the 18th century Jamaican planter Thomas Thistlewood committed 3,852 acts of sexual violence against 138 different women over the course of 37 years. The diaries of American slaveholders give no reason to believe that Thistlewood was unusual. And slaveholders throughout the Americans knew that the children born of enslaved women would inherit their mother's status.

The shared experience of racial oppression among Afro-Caribbeans and African-Americans did not end with slavery. The emergence of new "scientific" theories of race, which cast people of African descent as biologically inferior to White people, helped to shape new forms of racial inequality in the United States and Jamaica (which remained part of the British Empire until its independence in 1962). In the United States, Jim Crow and segregation denied political power and economic opportunity to people of African descent. In Jamaica, new racialized labor systems emerged, which looked like slavery in all but name. The common challenges faced by people of the African diaspora encouraged Marcus Garvey, a Jamaican immigrant, to found a branch of the Universal Negro Improvement Association and African Communities League in New York City in 1917.

Kamala Harris is a woman of color, and the daughter of immigrants. We are told that there was a time in this country's history when we used to celebrate the success of people like Harris, as a self-proclaimed "nation of immigrants." Though the despicable race-baiting of Trump, D'Souza, and other GOP lackeys makes it increasingly difficult to believe that the American Dream was anything other than hypocrisy, it would be a great shame to let these bullies overshadow the fact that a woman whose ancestors lived through the nightmare of slavery is running for one of the most powerful offices in the land. ♦

The original print version of this article was headlined "Twisted History"