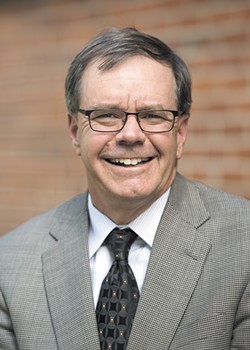 Christopher Keane is vice president for research at Washington State University. And at a university with a stated goal to become one of the top 25 research universities in the country, that means his job is pretty integral to the operations of WSU.

Here are three areas of research that Keane feels may be helping WSU toward that goal.

No. 1 in USDA research

In 2016, WSU spent $42.8 million in funding from U.S. Department of Agriculture research and development.

That's top in the nation, according to a survey from the National Science Foundation (NSF).

"WSU is very proud to be a key element of the innovation pipeline for the United States' $51-billion-a-year agriculture industry," Keane says.

It's the largest expenditure by WSU researchers since 1992, when NSF first started collecting the data. The projects include research to create bio-based alternatives to petroleum-based jet fuel, improved food safety using microwave technologies and an initiative to reduce insect and disease problems in hops.

That's not to mention that half the wheat in Washington is a WSU variety. WSU also created a new apple variety, the "Cosmic Crisp," which Keane says could itself be a billion-dollar industry.

What happens when infections become resistant to every type of antibiotic available?

That's the question WSU scientists are trying to answer. WSU professor Kariuki Njenga is based in Kenya and he is studying the global concern. He's looking for the link between human and animal disease. "That plays a leading role in antimicrobial resistance," Keane says.

In April 2018, WSU created the PNNL Institutes, a collection of three institutes aimed toward advancing science and technology in nuclear science, power grid and bioproducts.

It demonstrates WSU's dedication to fundamental research important to the future, he says. Between all three institutes, WSU studies a range of things from cybersecurity, to biofuels, to nuclear waste and implications for the Hanford cleanup.

That kind of research, he says, is key to innovation.

"One of my favorite statistics is half of U.S. GDP growth is due to innovation," Keane says.

The original print version of this article was headlined "Christopher Keane"