Chicago’s Russian Circles are a great band — and by adding Brian Cook, they are even better. 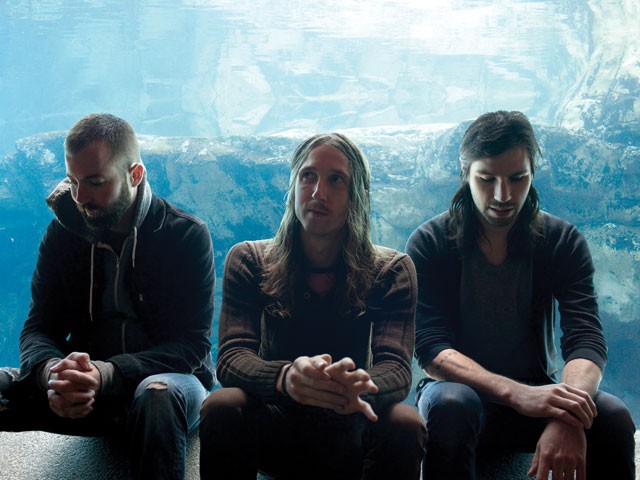 It’s about the orgasm. The pay-off. Instrumental, experimental rock — Mogwai, Slint, Explosions in the Sky — is for fans who want to feel the music.

Fans who are in for the long haul and are happy to ride along with a band’s noodling, twisting roller coaster knowing that, at the end, it will be worth it. They’ll get an epic, grandiose, spine-tingling and — hopefully — life-changing ending.

Though heavy instrumental rock is not something Russian Circles created themselves, it’s a territory the Chicago-based band has laid claim to in the last few years. They’ve redrawn borders within the genre, carving a sovereignty — a Liechtenstein, a Vatican City — exclusively theirs. And they redecorated, too: Their sound is heavy, ornate, bombastic and symphonic.

The duo that was formerly a trio became one again mid-way through their second record, Station. They poached longtime Seattle musician Brian Cook — of Botch, These Arms Are Snakes and Roy — to fill in on bass for that record. But with the recent death of the Snakes, Cook’s then-main musical squeeze, he became the full-time bass player in Russian Circles.

If you remember Café Sole or the Big Dipper or Fat Tuesday’s or the Detour, you’ve probably seen Cook a time or two. He’s since been named “Musician of the Month” by Alternative Press and is a longtime respected member of the Northwest music scene. We got on the phone with him to grill him about the state of instrumental rock and how to not get your gear stolen.

INLANDER: How does your role in Russian Circle differ from your roles in Botch and These Arms Are Snakes?

COOK: Well, I mean, in a lot of ways, it’s like a continuation of those bands for me in that [I play] a very instrumental bass. I’ve never been in bands that are vocals-based. [Russian Circles is] different in that it’s not quite as volatile and as unhinged as Botch or the Snakes. It’s more nuanced or patient … building up to the big moment.

Russian Circles’ newest album, Geneva, seemed to be telling a story — was it?

No, not really, you know I think we definitely wanted to make a record where you listen to it from begin ning to end. I am definitely a fan of the album. I like listening to a fully thought-out, fully realized chunk of music. A lot of people asked that about it, especially since because there’s no vocals and you have cryptic song titles — people try to project something on to the music. And I like that people do that. I like that it leads people to think there’s a bigger picture behind it. I like that mystery and the fact that people are listening that closely.

Having been in bands for a long time, do you feel like fans are more open to instrumental metal now?

Ten years ago, there was Godspeed You Black Emperor, Tortoise — I guess those bands aren’t on the heavier end. In some realms there’s always been that little subgroup of people that sort of get it and appreciate it. But yeah, it does seem like it’s growing in popularity. I guess our fans are a little older … like there are guys with full gray beards that come see us and we’re like, ‘He probably saw Iron Butterfly back in the day!’

Is Russian Circles the most “pro” band you’ve been in?

I mean, our van here in the States looks like it’s from 1972. It’s sort of our anti-theft maneuver: If you get a shitty-looking van, people won’t think there’s value in it. With the Snakes, we only did one tour with a sound guy when we were going out with Mastodon and Cursive and Against Me! Generally it was an expense we couldn’t afford. With Russian Circles, we can’t even tour without a sound guy anymore. If we’re going to do it the way we want, we need to have someone in tow that’s prepared for it. So things like that we’re like, ‘We’re in a grown-up band.’ But at the end of the day it’s still us just driving ourselves.