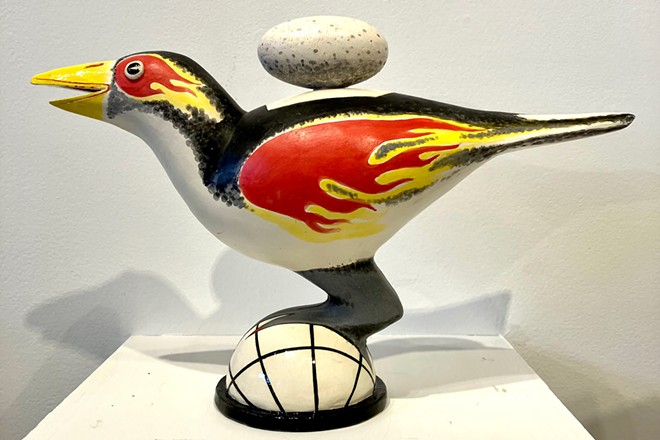 You might think that after more than 55 years doing the same job, a person might get bored, or feel they have mastered all there is to know about the work. But not Patti Warashina, who has made a living as a ceramic artist since the mid-1960s. And at 82 years old, Warashina is still excited about working with clay.

"I think the material itself, it keeps challenging you," says Warashina, who is the June featured artist at Spokane's Marmot Art Space.

"It's not just building three dimensionally, and learning to control the material, and to, you know, just keep saying, 'OK, maybe I can build a little bigger,'" Warashina says. Working in clay also challenges you to deal with the surface of the clay, adds Warashina.

Warashina's speaking from her Seattle-area home, where she recently oversaw the installation of an 18-foot-long by 14-foot-high public sculpture in the South Lake Union area titled Dreamer. Dreamer is a bit of a new direction for the artist: a super-sized, aluminum version of one of her earlier ceramic pieces. It's painted to emulate the bright color palette she uses on her clay sculptures, many of which are black, white and red. But Dreamer is also typical of Warashina's humorous handling of subject matter and fondness for figurative work.

For example, Gonzaga University's Jundt Art Museum featured Warashina in 2004 with an exhibition of "The Sake Sets: Drunken Power Series," a play on words (since sake is an alcoholic drink). Warashina's wry political and social commentary is evident in sake cups shaped like nuclear bombs or oil barrels and artworks with titles like Kimchee Chaos and Replacement Theory.

Warashina's distinct style and lengthy career has earned her international acclaim. In 2020, the Smithsonian Institution — the world's largest museum — honored Warashina with the first-ever visionary award bestowed on a ceramic artist. Warashina has also been recognized by Washington's Artist Trust, Montana's Archie Bray Foundation for the Ceramic Arts (where she was a board member), the National Endowment for the Arts (in 1975, 1986 and 2012) and the National Museum of Art in Kyoto, Japan.

And yet Warashina's name and work is less known in Spokane than other native sons and daughters, despite her being born and growing up here. That makes the Marmot show a homecoming of sorts.

Warashina was born in 1940, lived in the Franklin Park neighborhood and attended Lewis and Clark High School. Her father died when she was 12, and at 18 she followed her older sister to the University of Washington, where she earned bachelor's and master's degrees in fine arts. Even though as an adult Warashina drove by Spokane many times en route to Montana, she never stopped, and she maintained few contacts here after she left.

Instead, Warashina thrived in Seattle, where ceramics was experiencing a rebirth throughout the West Coast.

In the '70s, the contemporary art scene was dominated by abstract expressionism, mostly centered in New York City. Its heroes included painters Mark Rothko and Jackson Pollack and sculptor David Smith, and the style emphasized visible mark-making on the surfaces of things and spontaneity over recognizable subject matter.

By contrast, Warashina's work was more aligned with the emerging pop art and California-centric funk movement, both inspired by popular culture and humor. These movements embraced clay arts and artists like Bob Arneson, as well as Warashina, whose works from this time include the tongue-in-cheek "Basket" and "Loaf" series, with titles like Airstream Turkey and Ketchup Kiss.

Warashina was also influenced by surrealism, especially painter René Magritte, she says, and by her peers in what was then an evolving Pacific Northwest clay community. Key figures include Warashina's former mentor, Bob Sperry, whom she would later teach alongside and also marry, as well as ceramicist Peter Voulkos.

"[Voulkos] broke ceramics open for everybody," says Warashina, describing how his unconventional use of clay and experimentation resonated with her.

After seeing Voulkos' work using low-fire glazes to achieve a stunning red color, Warashina taught herself how to achieve similarly vibrant colors in her work, a technique she's refined over the decades.

That technique is well-represented in the handful of ceramic pieces on display at Marmot, especially covered jars resembling birds and cats.

"I think of [cats] as kind of sly," says Warashina, who still finds artmaking potential in her everyday surroundings. Warashina particularly likes their expressions.

"I don't know what it is about it, but it kind of makes me laugh," she says, noting that she's been toying with doing similar covered jars of dogs but hasn't nailed the details. "But one day, I'll figure it out." ♦

The original print version of this article was headlined "Lifetime Achievement"