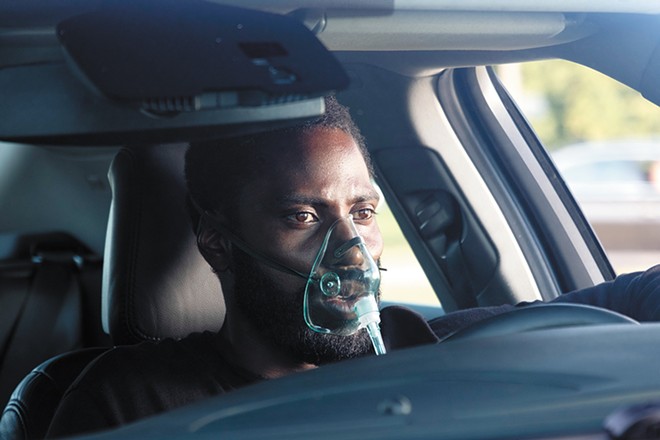 Movie theaters are closed in Washington, but it doesn't mean people aren't getting their cinematic fix. Makeshift drive-ins are popping up everywhere, including a new one at the Spokane County Fairgrounds, and new big-budget titles are hitting streaming and VOD platforms.

Then there's Christopher Nolan's Tenet. It was supposed to open in July, the first movie to usher us back into cinemas, but after a series of delays, Tenet finally hit 2,800 American screens in early September. It isn't showing in this corner of Washington, though all you have to do is hop over the state line into North Idaho, where it's playing at Coeur d'Alene's Riverstone Regal Cinemas and Hayden Discount Cinemas.

It's sort of crazy that I can drive just 40 minutes from my place in Spokane and be sitting in a multiplex again, something I haven't done since March. Of course, there are inherent risks to that venture: Scientists have expressed concerns about visiting movie theaters amidst a pandemic, and sitting in a small, enclosed space with a crowd and breathing in circulated air is a serious health risk. And while every major chain has been upfront about the safety precautions they're taking — limiting theater capacities, upping sanitation procedures, requiring masks — how enforceable are those rules? After all, you're not supposed to text in movie theaters, and people do it anyway.

I was still curious about the experience of seeing a movie mid-pandemic (and I was just as curious about Tenet), but I wanted to go about it as safely as possible. I opted for a showtime — Wednesday, early afternoon — that I knew would be sparsely attended and was in one of the large theaters at the Coeur d'Alene Regal.

The theater lobby was empty when I arrived, save for a hand sanitizer station near the concession counter where a single (masked) employee sold me a medium Pepsi. I didn't see another soul as I made my way to Auditorium 7, where I had a seat in the back row of a theater that I'd estimate has just over 300 seats. To promote social distancing, Regal's ticketing site automatically blocks off every other row and automatically puts two buffer seats on either side of you.

Miracle of miracles, I had the entire theater to myself. I couldn't have asked for a better scenario. Ten minutes before the movie started, two other people walked in. They were unmasked, despite signs on the front entrances and the doors to the auditorium requiring them, but they were also a good 10 rows away from me so I paid them no mind. I kept my mask on.

I settled in as the reel of ads for M&Ms and AT&T unspooled, and I realized the block of commercials I once found so annoying was now weirdly comforting. Then the trailers started, and I was sort of thrown off: It's unusual watching a string of clips for upcoming blockbusters — No Time to Die, Wonder Woman 1984, Dune — as if we're heading into a totally normal fall movie season when all of those movies are totally going to open without delay.

It was like time had stopped inside this theater, like the chaos of the outside world didn't exist, which I suppose is as appropriate an environment as any to see a Christopher Nolan film.

The lights went down, the studio logos cued up, and it finally hit me — I'm seeing a movie! My giddiness was sustained during the film's first 30 minutes: Tenet kicks off with one of Nolan's graceful action cold opens, and then throws us right into a hilariously convoluted plot that had my brain working overtime. But then it drones on for another two hours, joylessly zig-zagging through a series of twists, reversals and elaborate heists that I found dour and clinical and that, I must admit, I could not follow. I walked into the theater hoping that my first real movie in six months would be a masterpiece, but it turned out to be a major disappointment.

Nolan has also put the film in an unusual position: Tenet was forecasted to bring the dormant American theater industry roaring back, and yet it has grossed (perhaps unsurprisingly) only $36 million in the U.S. Add an additional $30 from my screening last week.

Since I was a teenager, I've been going to the movies nearly every week, sometimes two or three times. It's a routine as common as grocery shopping or unloading the dishwasher. Now here I was in an honest-to-god movie theater, and it felt almost like a novelty. Will I make the trip back to Idaho to see something else? Probably not: It's not exactly convenient for me, and I also doubt that every moviegoer will take as many precautionary measures as I did. The last place I want to contract COVID is in a matinee screening of The New Mutants.

If you do choose to go to the movies, do it with caution. And if you do see Tenet, consider taking notes. ♦