Matt Damon's new movie is about fate. We think you’re fated to like it. 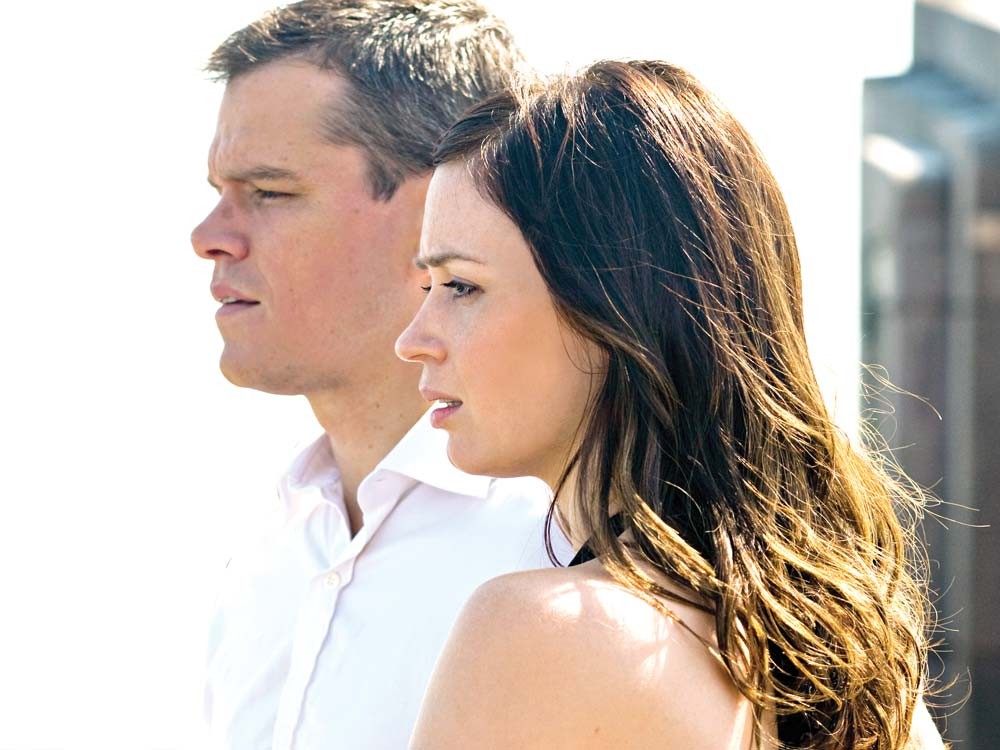 Bob Dylan said it best: “You know something is happening, but you don’t know what it is, do you, Mr. Jones?” But speculative fiction author Philip K. Dick managed to infuse that particular brand of paranoia in almost everything he wrote. The theme is right up front in many of his stories that were turned into films, from Blade Runner to Total Recall to Minority Report. The creepy feeling that makes us wonder, “Is someone watching me?” is evident right away in The Adjustment Bureau, the film adaptation of Dick’s story “The Adjustment Team.”

Plenty of liberties have been taken in the page-to-screen transfer that’ll make Dick devotees cringe. But the changes make the film work well, adding whole other levels of mistrust and suspicion and doing so in a less confusing manner than Dick’s often deliciously convoluted prose does.

The original story’s real-estate salesman, Ed Fletcher, is now popular senatorial candidate David Norris (Matt Damon), whose campaign hits an election-night boulder in the road and who is forced to make, instead of an expected victory speech, an off-the-cuff concession speech.

But it’s not a complete loss. Trying to pull himself together in a men’s room, he bumps into mysterious and slinky contemporary dancer Elise Sellas (Emily Blunt). Sparks fly, and it’s too bad that we don’t see more of the banter between Damon and Blunt.

But something ... someone ... a whole bunch of guys in dark coats and fedoras ... gets in the way, on purpose. We see them early on: a group of four men, at first just watching David as his campaign goes down the tubes, then discussing among themselves how they’re going to “get him back on track.”

They’re adjusters. Not exactly human, having certain special powers, and certainly numbering more than four. All we learn about them is that they’re here on Earth to make sure things happen “according to the plan.” They accomplish this by making adjustments, which could be as subtle as lightly bumping into a person on the street.

Unless, of course, an adjuster screws up.

One adjuster’s screw-up involves the whole business of David and Elise ever meeting again after the bathroom episode. They’re not supposed to, but they do. Chance? Arrangement? Something else?

We’re rooting for them all the way. We just know that they’re made for each other. But what about the plan? And hold on, what about the fact that the plan can be changed? Writer-director George Nolfi, who keeps everything slightly off-center, goes out of his way to avoid clearly explaining what’s happening. But he makes some threats very real (if you don’t do as you’re told, we’ll erase your brain), and even factors in some desperation among the faltering and flummoxed adjusters.

Damon is terrific in the part because he’s so good at wearing both a worried look and an excited-little-boy look on his face. Blunt shows off some smooth dance moves but doesn’t really stand out. It’s Terence Stamp, as head adjuster Thompson — initially reasonable, later malevolent — who gives the film a nerve-racking edge.

It all becomes a study of paranoia and defiance, of bureaucracy gone wrong. And it cleverly insists that — unlike the lyrics of another famous song, that of Humphrey Bogart’s Rick Blaine, in Casablanca — a kiss is not just a kiss.