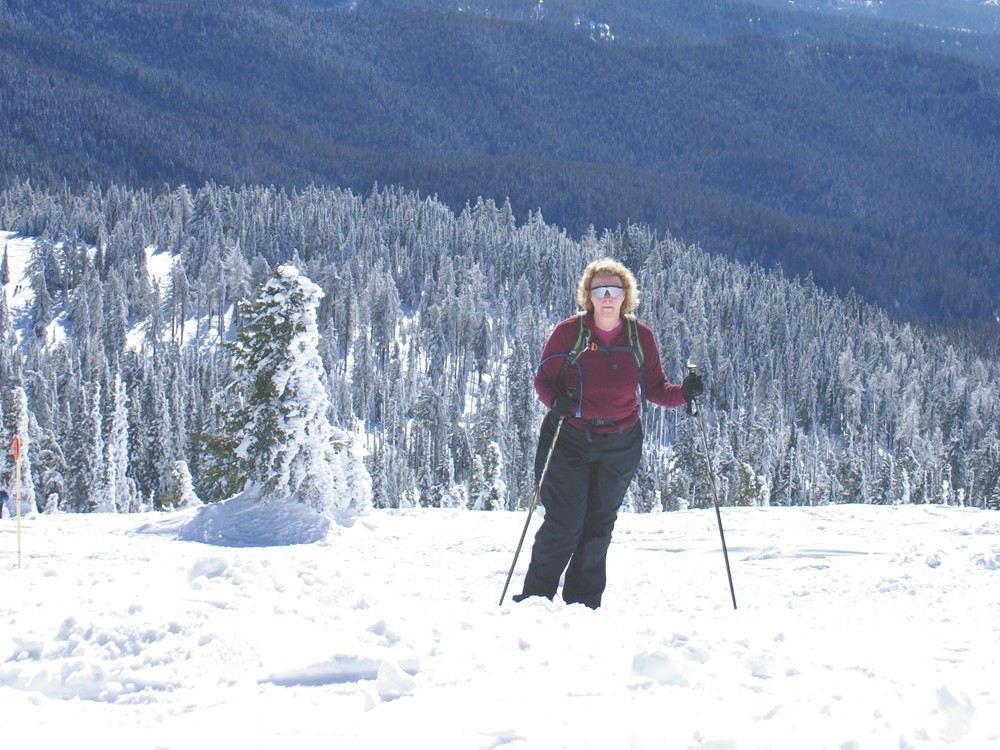 Holly Weiler spends a lot of time up on Mount Spokane, regardless of season. In the winter, snowshoes joined to her boots, her favorite hiking loop starts near Selkirk Lodge, cuts through the snowbound forest on the peak’s south slope, heads up, up toward the summit and rests at the CCC Cabin nestled between the peak and Mt. Kit Carson before it wends its way back down.

“It’s a really long loop,” says Weiler, a Spokane Mountaineers board member who also sits on the Mount Spokane State Park Advisory Committee. “But it incorporates a lot of the best views.”

For this reason, and unlike many winter sports, snowshoeing is for everybody. Skiing, boarding and snowmobiling are all about speed. Shoeing is a leisurely pursuit, defined more by the views you’ll see and the quiet that pervades the hike than adrenaline. Where most winter sports are extreme with a capital X, snowshoeing is about tranquility. Who doesn’t like an untroubled afternoon in a winter wonderland where the loudest sound is the crunch below your feet?

Enough about peace of mind. Let’s talk finances. You probably have everything — except for the shoes — in your closet. And the shoes are affordably priced, even cheaper to rent. (REI and Mountain Gear both have shoe rentals for $15 or less a day.)

“There are a lot of people who snowshoe and like that pace,” says Geoff Harvey, president of the Panhandle Nordic Club and admittedly more into skiing. “About 10 years ago, snowshoeing just took off. We’ve certainly tried to create a place for them.”

Harvey says some of the best places for snowshoeing (and Nordic skiing) are the Snow Peak Cabin just south of Sherman Pass, and Lookout Pass. The cabin is an arduous six-mile hike in, but at the end is a warm place big enough for five. (The cabin must be reserved through the Three Rivers Ranger District of the Colville National Forest.) And Lookout has a bunch of trails for expeditionary work near the snowmobile section of the park. Just look out for skiers and ’mobilers alike.

For something a bit further from the action, TJ Badger, president of the Backpacking Club in Spokane, recommends Pend Oreille County Park.

“If the snow’s deep enough,” he says. “It’s relatively small, but they do have a trail system. They have a large loop that’s maybe six miles.”

Badger’s club leads expeditions out here regularly. But of course, when it comes to snowshoeing, it’s hard to beat Mount Spokane. Badger likes everything about the park.

“One that we like to do is just go up the south face of Mount Spokane, staying out of bounds by following the out of bounds markers,” he says. “The Vista House is mainly for skiers and snowboarders, but there’s hot water and electricity. They have a fire going. They have this really neat rustic furniture.” Use it. Your legs will be tired.

Or Badger recommends coming at the peak from the north near Blanchard Pass. “There’s public land immediately to the south of that pass. You can go up to a place called Three Rocks. … You kind of have to find your own way. Once you know it, it’s not too bad,” he says.

But really snowshoeing is about one thing: getting out and walking through nature during the most inclement of seasons.

“Everything looks completely different in the winter,” Weiler says. “Especially lately, when the trees are encased in snow. It’s a great way to get out and get some exercise and see something beautiful.”