'It's not retribution': Tensions mount between Spokane Police Chief Craig Meidl and his civilian watchdog 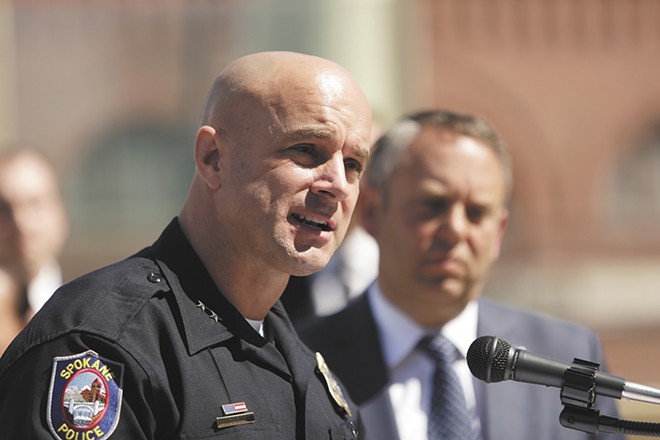 of disputes between the Spokane Police Department (SPD) and the Office of the Police Ombudsman (OPO) — the law enforcement agency's civilian watchdog —has dragged on for months, and the situation has only escalated.

In a Jan. 25 email titled " It is Important to Not Remain Silent" sent to the OPO Commission, the five-member civilian board that guides the OPO's efforts, Ombudsman Bart Logue argues that they shouldn't back down from the fight over oversight. "We should not sit back and say nothing and then expect a different result," he writes. (Spokane Mayor David Condon and the City Council were also cc'd on the message.)

The email is indicative of the currently frayed relationship between the OPO and Spokane Police Chief Craig Meidl. Since last summer, the ombudsman has clashed with the Police Department over a variety of oversight issues. Now, tensions are ratcheting up further. The OPO Commission is working with an attorney to possibly litigate the issues. Meanwhile, Logue, his staff and members of the OPO Commission have been banned from the Police Advisory Committee at Meidl's request due to the disputes — eliciting allegations of retaliation.

Last month, Joan Butler, the chair of the Police Advisory Committee, informed Logue in an email that his office and the OPO Commission have been barred from membership on the committee. ( is a group of largely community representatives and stakeholders that historically has provided input to SPD leadership.)

At a Jan. 22 OPO Commission meeting, Ombudsman Logue described their dismissal from the committee as Meidl retaliating against him and the OPO Commission for continually butting heads with SPD. "

I can't take that as anything but retribution. It just feels that way. I have no other way to say it. That's how I take it," he said.


Chief Meidl tells the Inlander that he asked Butler to remove the OPO and the OPO Commission from the committee because he wouldn't be able to have frank discussions with the other members about the ongoing disputes between him and the OPO.

"When the ombudsman is involved in filing complaints and threatening lawsuits, clearly you cannot have an open dialogue," Meidl says. "I need to be in a position where I can talk to my advisers about this. How can I do that when the people threatening complaints are in there?"

"This an advisory [committee] for the chief of police," he adds.

In response to Logue's characterization that the move is retaliation, Meidl says: "It’s not retribution. It’s a conflict of interest and I’m sorry that he sees that as retribution."

This latest scuffle stems from a slew of disagreements between the ombudsman and SPD. Logue has requested that his staff have access to SPD Internal Affairs records while the commission has asked for information on police use-of-force incidents involving people of color. Both requests have been denied by Chief Meidl, who has cited ongoing contract negotiations between the Spokane Police Guild and the city of Spokane (as well as legal advice that he's received). Mayor Condon has also taken the same line, stating in a Dec. 4 letter to the OPO Commission that the issues will be "resolved" in the bargaining process.

Adding fuel to the fire is Meidl's refusal to redo an inquiry into a citizen complaint the demeanor of an officer at a protest last summer after the ombudsman deemed the investigation subpar. (On this issue, the Spokane Police Guild has filed a grievance letter to Meidl regarding the summer protest incident investigation, arguing that the OPO is violating the previous collective bargaining agreement.)

With the mayor unwilling to get into the fight, the disputes have effectively been brought to a , prompting the OPO commissioners to consult and

At the Jan. 22 OPO Commission meeting, commissioners consulted with and former Spokane Mayor Dennis Hession regarding potential next steps. "We're not going to sit here and have him [Chief Meidl] dictate what we can and can't do," Commission Vice-Chair Ladd Smith said at the meeting.

All of this — from the Spokane Police Guild's grievance letter to Chief Meidl's argument that the issues should be addressed in the ongoing contract negotiations — frame Logue's Jan. 25 email rallying the commissioners.

"In light of the continued pushback from the Guild on the OPO and the current pushback on the OPO [Commission] from the Police Chief ... we should not take a back seat and simply trust that proper authorities of the OPO and the OPO [Commission] are being kept in mind," he writes.
In the email, Logue also protests any potential dilution of civilian oversight authorities during the ongoing contract negotiations between the city and the police union.

"We have no idea what the city is bargaining for regarding the OPO and the OPO Commission," he writes.  "We should not accept any bargained contract that is outside of the City or one which seems to empower those who would limit or undermine the authorities of the OPO and the OPO [Commission]."

This post has been updated to correct OPO Commissioner Smith's title and to clarify Chief Meidl's position.