It’s official: 2018 was the fourth-warmest year on record 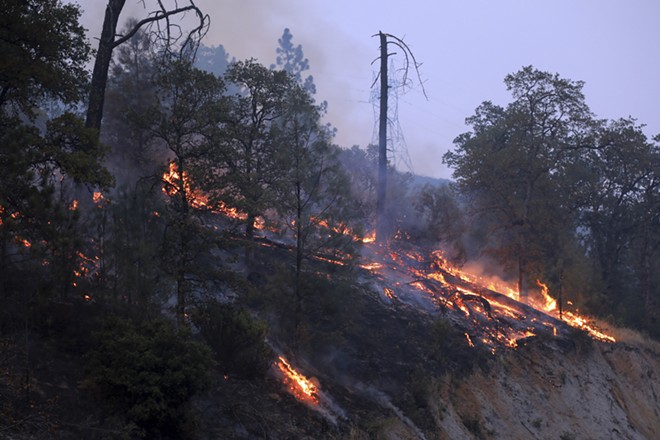 Jim Wilson/The New York Times
A hot spot burns near Whiskeytown Lake outside Redding, Calif., July 31, 2018. Officials said the Carr Fire was one of 17 major fires across California that have consumed more than 450,000 acres. Gov. Jerry Brown called it the “new normal.”

NASA scientists announced Wednesday that the Earth’s average surface temperature in 2018 was the fourth highest in nearly 140 years of record-keeping and a continuation of an unmistakable warming trend.

“The five warmest years have, in fact, been the last five years,” said Gavin A. Schmidt, director of the Goddard Institute for Space Studies, the NASA group that conducted the analysis. “We’re no longer talking about a situation where global warming is something in the future. It’s here. It’s now.”

The results of this warming, Schmidt said, can be seen from the heat waves in Australia and extended droughts to coastal flooding in the United States, in disappearing Arctic ice and shrinking glaciers. Scientists have linked climate change to more destructive hurricanes like Michael and Florence last year, and have found links to such phenomena as the polar vortex, which last week delivered bone-chilling blasts to the U.S. Midwest and Northeast.

While this planet has seen hotter days, and colder ones, what sets recent warming apart is the relative suddenness of the rise in temperatures and its clear correlation with increasing levels of greenhouse gases like carbon dioxide and methane produced by human activity over the same period.

The Earth’s temperature in 2018 was more than 1 degree Celsius (1.8 degrees Fahrenheit) above the average temperature of the late 19th century, when humans started pumping large amounts of carbon dioxide into the atmosphere. Scientists say that if the world is to avoid the worst consequences of climate change, global temperatures must not rise by more than 2 degrees Celsius compared with preindustrial levels.

It appears highly likely, at least from today’s perspective, that the line will be crossed, despite the fact that 190 nations have signed the Paris climate agreement. (The United States is still technically a party to the accord, although President Donald Trump has pledged to withdraw.)

The warmest year was 2016, its record-setting temperature amplified by the Pacific Ocean phenomenon known as El Niño. In 2018, the world experienced the opposite phenomenon, a cooling La Niña.