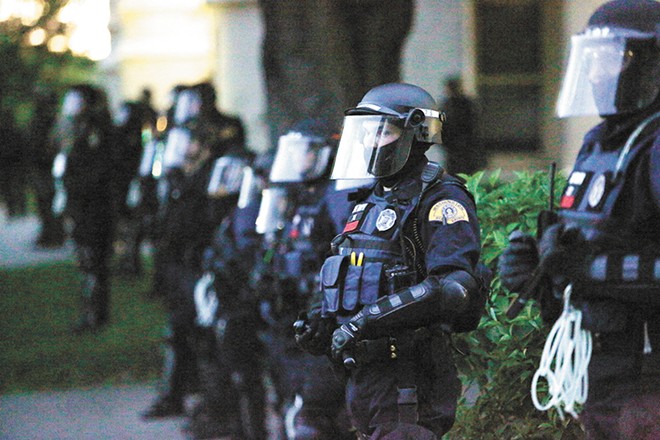 The San Francisco Board of Supervisors is considering a resolution urging its Civil Service Commission to prohibit hiring police officers with a history of serious misconduct. Let that sink in.

In one of the most progressive jurisdictions in the nation — a region regularly hauled out by Fox News talking heads to show how liberals are "out of control" — what's the bold step they are taking in response to nationwide protests over police violence? To stop hiring officers with serious misconduct complaints filed against them in other cities, which may well be the reason they're seeking new employment.

Similarly, many of the policies currently being proposed seem to be just plain common sense — if also not nearly enough. Take, for example, the "8 Can't Wait" proposals from Campaign Zero, which aims to end police violence in America.

Over 40 years of research, including an analysis of the 100 largest U.S. cities in 2016, show that restrictions on the use of force are the most effective way to reduce police violence. Basically, having policies that reduce the use of violence do, in fact, reduce violence.

Specifically, Campaign Zero has identified eight policies that when fully implemented were "associated with 72 percent fewer police-involved killings compared to departments with none of these policies in place and a 54 percent reduction for the average police department."

Here are those policies:

Ban Chokeholds and Strangleholds. Choking and strangling too often result in unnecessary deaths and serious injuries.

Require De-Escalation. By communicating and maintaining distance, along with other tactics, officers can de-escalate situations and eliminate the need to use force.

Require Exhausting All Alternatives Before Shooting. Exhaust all other alternatives, including non-force and less-lethal force options, before resorting to killing people.

Duty to Intervene. If you see another cop using excessive force, stop them.

Require Use of Force Continuum. Actually have a system that determines what level of force is appropriate in various situations and only allow severe types of force in the most extreme situations.

Require Comprehensive Reporting. If an officer uses force, threatens force or points a gun at someone, it needs to be included in their report.

None of these policies are radical. All are currently implemented in some police departments. This raises the question: Why haven't these basic reforms been implemented everywhere?

Frequently the answer has been police unions. Police unions have forcefully advocated for broad discretion in the use of force and minimal accountability. The argument has been that both are needed to protect the safety of officers.

Police unions' success in this advocacy has often made it difficult to fire officers for even blatant misconduct and near impossible to convict them when they commit crimes while on the job. Police unions also frequently defend officers beyond any rational standard.

For example, during a recent protest in Buffalo, after an officer was caught on tape forcefully pushing and injuring an elderly man, the union initially claimed he had tripped. (He had not.) Then, they said, officers were ordered to clear the square and were just following orders. They weren't specifically told not to knock over elderly gentlemen, so how could they have known?

It's perhaps unsurprising given this approach and attitude that cities with police unions see greater occurrences of police violence. But also they don't actually realize any improvement in officer safety. That's right. Police unions, as a whole, have made policing less safe for the people they are sworn to serve without actually increasing officers' own safety.

However, despite the despicable statements made and the counterproductive policies proposed by some of their elected union leaders, I'm still sympathetic to the challenges faced by frontline officers.

In many ways, they've been given impossible jobs. Former Dallas Police Chief David Brown spoke to this in 2016.

"Every societal failure, we put it to the cops to solve," Brown said. "Not enough mental health funding? Let the cops handle it. Not enough drug addiction funding? Let's give it to the cops. Here in Dallas we have a loose dog problem. Let's have the cops chase loose dogs. Schools fail? Give it to the cops. ... That's too much to ask. Policing was never meant to solve all those problems. I just ask other parts of our democracy along with the free press to help us."

It's clearly time to reimagine public safety. This goes beyond the simple prescriptive steps described above. We need to dismantle police departments across our nation and rebuild them to actually tackle the challenges we face.

It's time for this kind of overhaul of police departments to be conducted across the country with an even greater emphasis on the different types of public safety personnel and responses required by different situations. Sometimes we will still need the overwhelming force of a SWAT team, but more often situations call for social workers and other types of highly skilled, but unarmed, civil servants.

Over the last weekend, a supermajority of the Minneapolis City Council committed to exactly this kind of reimagining.

City Council President Lisa Bender tweeted, "Yes. We are going to dismantle the Minneapolis Police Department and replace it with a transformative new model of public safety."

She acknowledged in an interview with CNN that they don't know exactly what they're building yet, but they do know it will be built for and with the people who live within their community. They know they will build it for this moment, to expand justice and in aspiration of achieving their highest values.

Personally, I can't think of anything more American. ♦