Who says a horror movie has to be scary the whole way through? 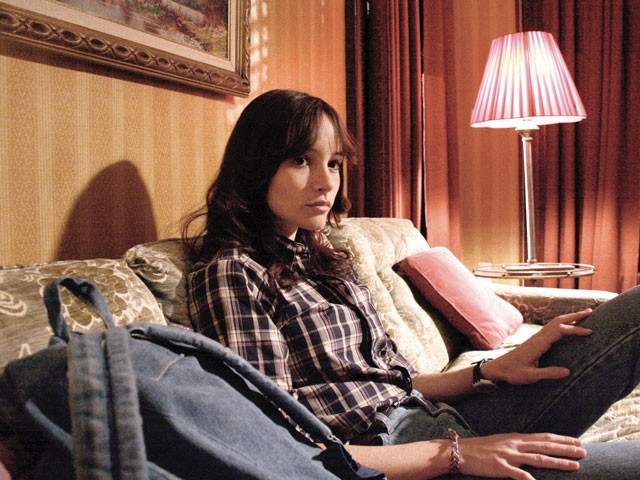 It isn’t until the very last 15 minutes of Ti West’s The House of the Devil that you realize that nothing truly scary has happened yet.

The director (Cabin Fever 2) lays out a simple story set in the 1970s (giving him a great excuse to revive the look and feel of classics like Halloween and Amityville Horror). Samantha (Jocelin Donahue, a Famke Janssen lookalike) is a poor college student looking to move into her fi rst apartment — but she can’t afford the down payment. When she notices an ad for a babysitting job, she jumps at the chance to make some extra cash. The first creepout of the film comes when she calls the number on the ad and talks to the desperate Mr. Ulman (Tom Noonan).

She needs cash, and he’s willing to pay.

The porny-ness ends when Samantha arrives at the Ulmans’ middle-of-nowhere mansion. Mr. Ulman reluctantly (not to mention creepily) explains that there are no children in the house; this “babysitting” job is actually for his ailing, elderly mother — and Samantha is only there in case of an emergency. She probably won’t even see the old mother. When Samantha hesitates, he triples her payment. She accepts.

What follows are 75 minutes of mysterious thuds, creaking pipes and dark corridors.

Like the heroines of so many other horror movies, Samantha’s curiosity forces her to investigate each and every room in the huge house. But unlike those same heroines, there are doors that Samantha doesn’t open. She flips on all of the lights in the house. She keeps a kitchen knife between her and every closed door.

It’s a horror film — but does that mean that every minute of it should be scary? Maybe not. Just when you think something scary will happen, it usually doesn’t. When Samantha peers in a mirror, you’re sure someone will be standing behind her. Nope. When the phone rings, you wait to hear heavy breathing on the other end. You don’t. Long hallway shots never end at the feet of identical twins a la The Shining; television sets never crackle like The Ring or Poltergeist. So when something scary does happen, it’s totally, 100 percent, worth it.