A new mail policy at the county jail has inmates fuming. 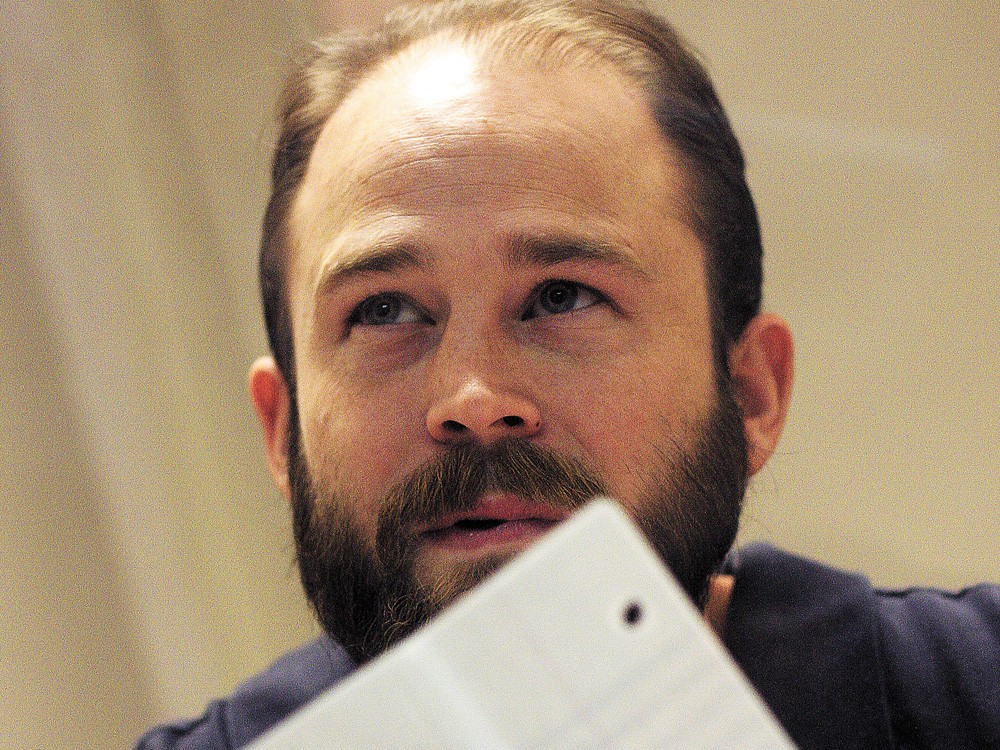 Young Kwak
Inmate Rich Sullivan holds up a letter that was returned to him because it didn't follow the jail's "Postcards Only" policy.

Much of what Rich Sullivan has to say gets lost in the hiss and crack of the Spokane County Jail’s intercom system. Trying to read his lips — obscured by a beard and a thick, scratched window — is nearly impossible.

Another form of communication the soft-spoken Sullivan relied upon during his first month of incarceration is also being obscured, this one by a newly implemented jail policy.

On Sept. 1, the jail instituted new rules disallowing anything to be mailed into or out of the jail except postcards measuring 5.5-by-8.5 inches or smaller.

“He needs that connection,” says Connie Sullivan, who exchanged letters, documents and clipped magazine articles with her son in a near-constant stream of correspondence. “He doesn’t need to sit there and fester and listen to everybody else. He needs somebody that’s outside that realm right now.”

Connie Sullivan says she relied on that connection — which allowed her to do legal research for her 34-year-old son — since her full-time job doesn’t allow her to visit during the jail’s recently restricted visiting hours. “I just think it’s an effort to silence the inmates,” she says. “How much can you write on a 5-by-5 postcard?” It’s a question the American Civil Liberties Union has as well.

“As far as I can tell, these policies are being adopted without any significant amount of thought,” says David Fathi, director of the ACLU’s National Prisons Project. He points to other jails that have recently adopted similar postcard polices, such as the Maricopa County Jail in Arizona and the Boulder County Jail in Colorado. “There are such things as fads in any industry, and the jail sector is no different. I would characterize this as a fad. Unfortunately, bad ideas tend to spread quickly in corrections and this is an example of that.”

Drugs have come in, bodily fluids have gone out, says Lynette Brown, the jail’s office manager.

“All kinds of sundry things,” she says. “We had a staff member assigned to scrutinize mail and they’d go through all the mail and inspect it for contraband.”

According to Brown, the time — and money — needed to ensure jail mail isn’t tainted by such unseemly smuggled goods is something the county can no longer afford. As jail officials looked into ways to stem the flow of contraband coming into their facilities, the latest round of layoffs took out the mail inspector at Geiger Corrections Facility.

The issue of how to beef up mail security while saving money suddenly became pressing. Lt. Joanne Lake, along with Brown, was tasked with finding a solution.

In her research late last year, Lake came across an article about the Marion County Jail in Oregon, which adopted the postcard policy less than a year ago. “We’re not trying to be mean or make people upset,” Marion County Sheriff Jason Myers told the Salem, Ore., newspaper Statesman Journal. “It’s about efficiency and safety in the workplace.”

“I thought, ‘This looks like it makes sense,’” Lake says. After more investigation, she realized the postcard policy was catching on. “It looked like a new trend. … I noticed it was coming out of the Arizona area. A lot of these types of policies come out of Arizona.”

The first jail to adopt such a policy was in Maricopa, which is run by the infamous Sheriff Joe Arpaio, who has named himself “America’s Toughest Sheriff.” He is currently under investigation by the FBI and U.S. Department of Justice for civil rights abuses and abuse of power. Arpaio allows inmates to wear only pink underwear, something else the Spokane County Jail imitates.

Maricopa County was sued over the postcard program, which began in May 2007. A federal district court cleared the jail, saying inmates’ privacy rights were not being infringed.

The ACLU’s not so sure. “It’s clear that jail administrators have the right to open mail … and to exclude things that are dangerous to jail security,” says the ACLU’s Fathi. “But they need to recognize how much these policies restrict communication. … This is a very significant burden not only on the incarcerated, but also on those they’re writing.”

Fathi points to a few examples of correspondence that would no longer be allowed into the jail: a child’s drawing, medical records, perhaps a letter detailing wrongful treatment to a member of the media.

Nancy Talner, staff attorney for the ACLU of Washington, says her organization has just become aware of the Spokane County Jail’s new postcard policy, the first of its kind in the state.

“We are looking into it,” she says. “But you can’t just immediately react. You have to investigate and find out what’s going on.”

Still, the ACLU is worried the jail is taking it too far. Talner points to the jail’s “Authorized Magazines” list, which includes just 15 publications, including Better Homes and Gardens, Reader’s Digest, Foreign Policy and Wired.

“Prison Legal News. That’s left off,” she says. “There’s all kinds of media that aren’t on there. Why are they excluding them?”

Free speech and rights of association are also jeopardized under the new policy, Talner says. Doctor-patient confidentiality and correspondence with a religious leader are just two of the examples she cited as being threatened by this policy.

Both Talner and Fathi discussed the nature of jail time versus prison time as a factor in the ACLU’s involvement. Jails usually incarcerate pre-trial detainees, those who have yet to be convicted of a crime. Prisons hold convicted criminals. According to Fathi, the postcard policy has not been adopted by any prison yet, just jails.

“They’re often [in jail] for a short period of time — contact with family and friends is very important,” Talner says. “That’s often a factor in how well they’ll do once they get out.”

“They’re in jail because they’re poor. If they weren’t, they would have posted bail,” Fathi says. “They’re in there for the crime of poverty, for not being able to pay court fees.”

Sullivan´s about 70 days into a 150-day stint at the jail stemming from his failure to pay court fines. Before he was booked into the jail in late July, he was taking classes at Spokane Community College for more than a year, planning to major in business administration. To aid in his schoolwork, he had signed up for cable Internet and split the $58 monthly bill with his roommate.

It was this — the $29 he paid every month — that he says convinced the justice system that he had the means to pay the $20,000 in court fines he had accrued from his earlier run-ins with the law, when he was arrested for malicious mischief and possessing stolen property in the second degree.

Before contact with his mother was virtually cut off, they were doing research on his case, trying to find a way to clear his name of the court fines.

“I was having her send me legal information,” Sullivan says. (Sealed legal mail is still allowed, but it has to come from a lawyer.) Now, they’re separately doing research on the postcard policy.