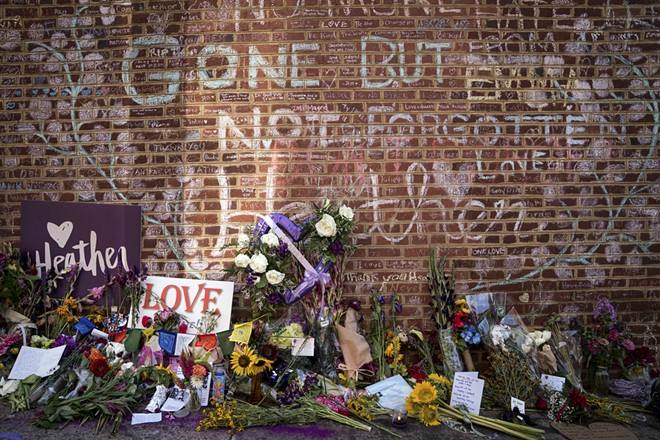 Erin Schaff/The New York Times
A memorial to Heather Heyer on Aug. 12, 2018, at the site where she was killed in 2017 during the “Unite the Right” rally in Charlottesville, Va. James Fields Jr., who killed Heyer when he steered his car into counterprotesters at the rally, was sentenced to life in federal prison on Friday, June 28, 2019.
By Mitch Smith
New York Times News Service

James Fields Jr., the white supremacist who murdered a woman two summers ago when he steered a Dodge Challenger into a crowd of peaceful demonstrators in Charlottesville, Virginia, was sentenced Friday to life in federal prison, The Associated Press reported.

Lawyers for Fields, 22, had pleaded for mercy, citing his difficult childhood and mental health problems. Prosecutors had sought the life sentence, arguing Fields’ racist, anti-Semitic beliefs motivated the decision to attend the white supremacist rally in Charlottesville and to attack counterprotesters, killing Heather Heyer and injuring dozens of others.

“The defendant’s crimes were so horrendous — and the maiming of innocents so severe — that they outweigh any factors the defendant may argue form a basis for leniency,” federal prosecutors told the judge in a sentencing memo. “This is particularly true in light of the fact that he has demonstrated that he feels no remorse for his actions and continues to espouse his hateful ideology.”

Fields was among hundreds of white supremacists who swarmed Charlottesville in August 2017 for the “Unite the Right” rally, in which they shouted anti-Semitic phrases, marched with tiki torches and attacked a racially diverse group of counterprotesters. The rally appeared to be winding down when Fields drove his car into a crowd of those counterprotesters.

The sheer number of white nationalists who marched in Charlottesville, and President Donald Trump’s assertion afterward that bad actors on “many sides” were to blame for the violence, led to a national reckoning on the ascendance of white supremacy and the threats it poses.

Heyer, 32, a paralegal, was known in Charlottesville as someone who spoke out when she saw injustice.

“Heather was a very strong woman” who stood up against “any type of discrimination,” Alfred A. Wilson, a manager at the law firm where she worked, said shortly after her death. “That’s just how she’s always been.”

Fields pleaded guilty to 29 federal charges earlier this year, including a hate crime for Heyer’s death. Federal prosecutors dropped another charge that could have led to the death penalty.

When Fields pleaded guilty, Attorney General William Barr said the hate crimes were “acts of domestic terrorism” and that prosecuting them was a priority for his office.