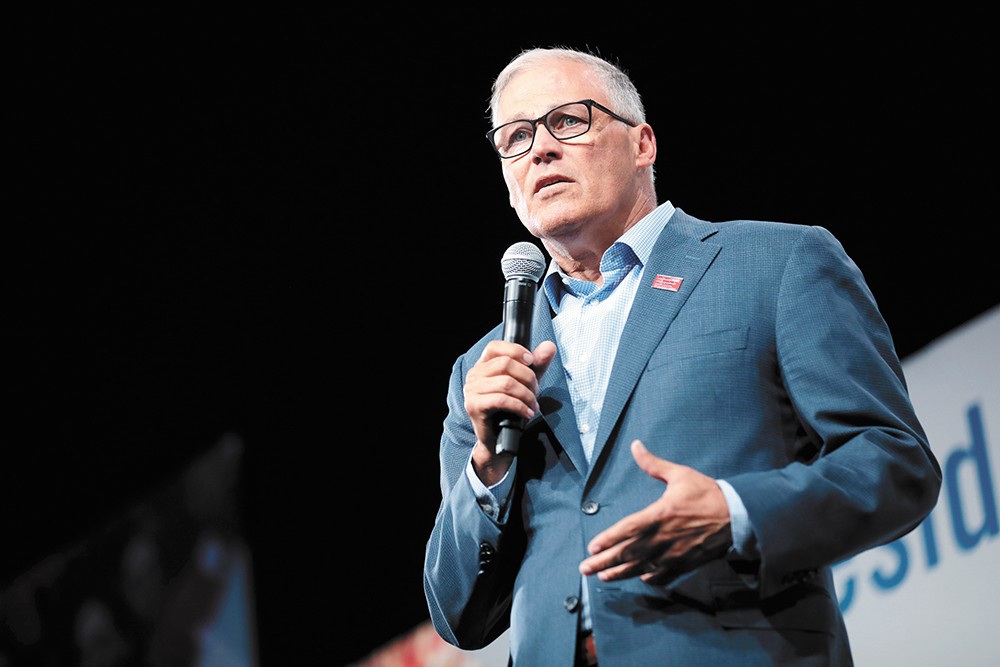 Washington Gov. Jay Inslee launched his presidential campaign with the sole intention of being a one-hit wonder. Yes, he can talk about the full gamut of other issues, from health-care policy to the state of the filibuster. But Inslee really wanted to talk about one thing: climate change.

And if you know one thing about Inslee, other than his dreamy jawline, that would be it. The man thinks climate change is a really big deal. After all, if climate change is really the apocalyptic threat that plenty of Democratic voters — and scientists, for that matter — say it is, why not actually treat it that way?

Sure, in Washington state, Inslee's environmental record isn't quite as sparkling as he made it out to be in the press, as anyone familiar with the fight over a northeast Washington smelter plant or the state's water-quality standards could tell you.

A few savvy questioners pointed out that Washington state has one of the most poor-punishing tax codes in the nation and that his policies had helped not-exactly-progressive companies like Amazon and Boeing.

Yet buoyed by a solidly Democratic state Legislature that went on a shopping spree for Inslee's agenda — passing a "public option" health-care plan and mandating the state ditch fossil fuels and coal from the state's electricity supply by 2045 — his record looked a lot more hefty than when he launched his campaign.

But ultimately, Inslee's six years as governor and dozens of years in the House of Representatives just couldn't land him in the polls as prominently as, say, a mayor from an Indiana city half the size of Spokane. With little chance of meeting the polling threshold for the next debate, he dropped out last month.

A week later, as if to rub salt in the wound, the Democratic National Committee voted 222-137 against letting the remaining candidates participate in climate change-focused debate.

"I proudly adopted many of @JayInslee's plans — you go anywhere where there are good plans," Elizabeth Warren tweeted Wednesday night. "The only way we're going to make change is by looking everywhere."

Compare that to 2016, when the closest the presidential debates got to a direct climate-change question was when a dude named Ken Bone asked about energy policy.

And a few years from now, when the droughts are longer, floods deeper, heat waves hotter, hurricanes stronger — when half the country is spending yet another August choking on wildfire smoke — a desperate nation may be ready to listen to Inslee's words of comfort: "Told ya."