Jeff Flake, a Fierce Trump Critic, Will Not Seek Re-Election for Senate 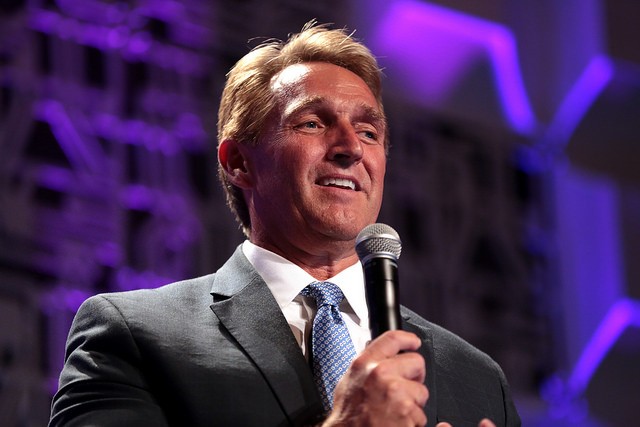 
WASHINGTON — Sen. Jeff Flake, R-Ariz., who has tangled with President Donald Trump for months, announced Tuesday that he will not seek re-election in 2018, saying he “will no longer be complicit or silent” in the face of the president’s “reckless, outrageous and undignified” behavior

Flake made his announcement in an extraordinary, 17-minute speech on the Senate floor, in which he challenged not only the president but also his party’s leadership. He deplored “the casual undermining of our democratic ideals, the personal attacks, the threats against principles, freedom and institutions, the flagrant disregard for truth and decency” that he said has become so prevalent in U.S. politics.

The remarkable moment came just hours after Trump had renewed his attacks on another critic in the Republican Party, Sen. Bob Corker of Tennessee, saying he “couldn’t get elected dogcatcher in Tennessee.” Corker, appearing more weary than angry, said the president “is debasing our country.”

Flake’s dramatic decision and the back-and-forth between Trump and Corker appeared to mark a moment of decision for the Republican Party. A week ago, Sen. John McCain, the senior senator from Arizona, spoke in Philadelphia, decrying the “half-baked, spurious nationalism” that he sees overtaking U.S. politics. Former President George W. Bush, in yet another speech, lamented, “We’ve seen nationalism distorted into nativism.”

But Flake, choosing the Senate floor for his fierce denunciation, appeared to issue a direct challenge to his party. Without mentioning Trump by name, Flake, 54, took direct aim at the president’s policies, notably his isolationist tendencies, but also his behavior and that of his aides. He had already touched on these themes in a book he published in August that was highly critical of the president.

“We must stop pretending that the conduct of some in our executive branch are normal,” Flake said. “They are not normal. Reckless, outrageous and undignified behavior has become excused and countenanced as telling it like it is when it is actually just reckless, outrageous and undignified. And when such behavior emanates from the top of our government, it is something else. It is dangerous to a democracy.”