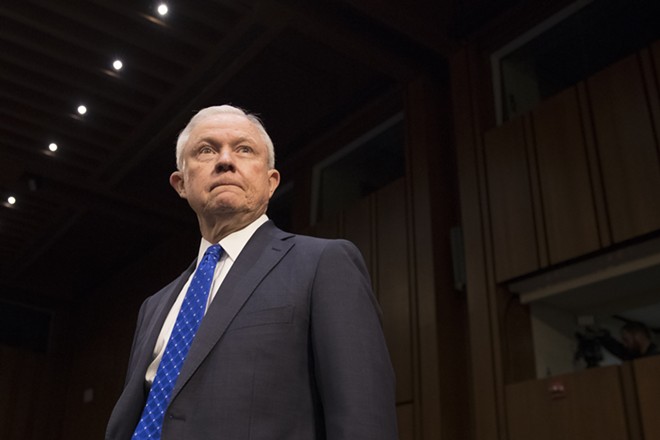 Tom Brenner/The New York Times
Attorney General Jeff Sessions at a Senate Judiciary Committee hearing in Washington on Oct. 18, 2017. President Donald Trump forced out Sessions on Wednesday, Nov. 7, 2018, ending a partnership that soured almost from the start of the administration and degenerated into one of the most acrimonious public standoffs between a commander in chief and a senior cabinet member in modern American history.
By Jeremy W. Peters and Maggie Haberman
The New York Times Company

WASHINGTON — Jeff Sessions, the former senator from Alabama whose tumultuous tenure as President Donald Trump’s attorney general lasted less than two years, will enter the race to reclaim his old seat in 2020, a Republican official said.

Sessions has remained largely out of the public eye, and has been effectively exiled from Republican politics, since he was forced out of the Trump administration last November. He had repeatedly clashed with the president over his decision to recuse himself from the Justice Department’s investigation into Russian meddling in the 2016 election.

Trump relentlessly attacked Sessions both in public and in private, calling him “scared stiff” and his leadership “a total joke,” among other insults, ultimately forcing him to resign. By choosing to run for office now, Sessions risks reigniting attacks from his former boss, who could undermine his standing among the Republican voters he needs to win next year’s crowded primary election on March 3. Trump won the staunchly Republican state in 2016 with 62% of the vote and remains highly popular there.

The race is likely to be one of the most closely watched of the 2020 cycle, and not only because of the lingering tension between Trump and Sessions. Many Republicans are bracing for the possibility that Roy Moore, the former Alabama chief justice accused of fondling teenage girls in his 30s, could once again become the nominee. He entered the race in June.

Alabama Republicans picked Moore as their nominee in the 2017 special election to fill the seat Sessions had vacated. But after several women came forward, claiming he had abused them when they were underage, his campaign unraveled. He lost the general election to Doug Jones, who became the first Democrat in a generation to win a Senate seat in Alabama.

It is not clear how Sessions’ entry into the race might affect some of the other more moderate Republican candidates who have already declared, including Tommy Tuberville, the former Auburn University football coach, and Bradley Byrne, a congressman who represents a district near Mobile.

Sessions’ decision comes just before Friday’s deadline to enter the race. People close to him have said he was pained at the possibility that his final act in public life could be his contentious 21-month tenure at the Justice Department.