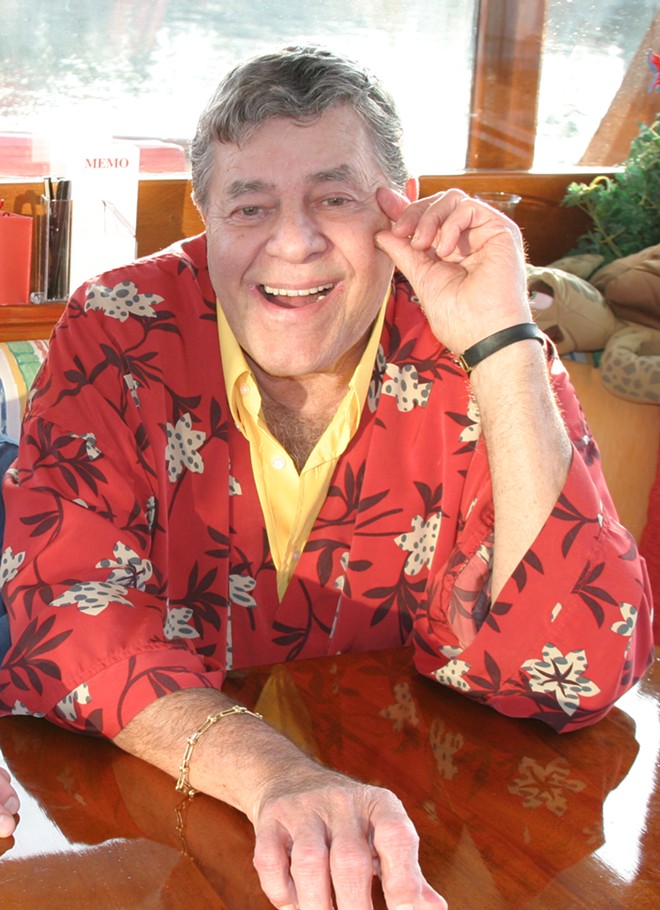 
Jerry Lewis, the comedian and filmmaker who was adored by many, disdained by others, but unquestionably a defining figure of American entertainment in the 20th century, died Sunday morning at his home in Las Vegas. He was 91.


His death was confirmed by John Katsilometes, a columnist for The Las Vegas Review Journal, who spoke to family members.

Lewis knew success in movies, on television, in nightclubs, on the Broadway stage and in the university lecture hall. His career had its ups and downs, but when it was at its zenith there were few stars any bigger. And he got there remarkably quickly.

Barely out of his teens, he shot to fame shortly after World War II with a nightclub act in which the rakish, imperturbable Dean Martin crooned and the skinny, hyperactive Lewis capered around the stage, a dangerously volatile id to Martin’s supremely relaxed ego.

After his break with Martin in 1956, Lewis went on to a successful solo career, eventually writing, producing and directing many of his own films.

As a spokesman for the Muscular Dystrophy Association, Lewis raised vast sums for charity; as a filmmaker of great personal force and technical skill, he made many contributions to the industry, including the invention in 1960 of a device — the video assist, which allowed directors to review their work immediately on the set — still in common use.

A mercurial personality who could flip from naked neediness to towering rage, Lewis seemed to contain multitudes, and he explored all of them. His ultimate object of contemplation was his own contradictory self, and he turned his obsession with fragmentation, discontinuity and the limits of language into a spectacle that enchanted children, disturbed adults and fascinated postmodernist critics.

Jerry Lewis was born on March 16, 1926, in Newark, New Jersey. Most sources, including his 1982 autobiography, “Jerry Lewis: In Person,” give his birth name as Joseph Levitch. But Shawn Levy, author of the exhaustive 1996 biography “King of Comedy: The Life and Art of Jerry Lewis,” unearthed a birth record that gave his first name as Jerome.

The phenomenal rise of Martin and Lewis was like nothing show business had seen before. Partly this was because of the rise of mass media after World War II. And partly it was because four years of war and its difficult aftermath were finally lifting, allowing America to indulge a long-suppressed taste for silliness. But primarily it was the unusual chemical reaction that occurred when Martin and Lewis were side by side.

After a farewell performance at the Copacabana on July 25, 1956, Martin and Lewis went their separate ways.

Lewis persuaded Paramount to take a chance on “The Bellboy” (1960), a virtually plotless hommage to silent-film comedy that he wrote, directed and starred in, playing a hapless employee of the Fontainebleau Hotel in Miami Beach.

It was the beginning of Lewis’ most creative period. During the next five years, he directed five more films of remarkable stylistic assurance, including “The Ladies Man” (1961), with its huge multistory set of a women’s boardinghouse, and, most notably, “The Nutty Professor” (1963), a variation on “Dr. Jekyll and Mr. Hyde,” in which Lewis appeared as a painfully shy chemistry professor and his dark alter ego, a swaggering nightclub singer.

“The Nutty Professor” is probably the most honored and analyzed of Lewis’ films. (It was also his personal favorite.)

Although he retained a preternaturally youthful appearance for many years, Lewis had a series of serious illnesses in his later life, including prostate cancer, pulmonary fibrosis and two heart attacks.

Through it all, Lewis continued his charity work, serving as national chairman of the Muscular Dystrophy Association and, beginning in 1966, hosting the association’s annual Labor Day weekend telethon. The telethon raised about $2 billion during the more than 40 years he was host.