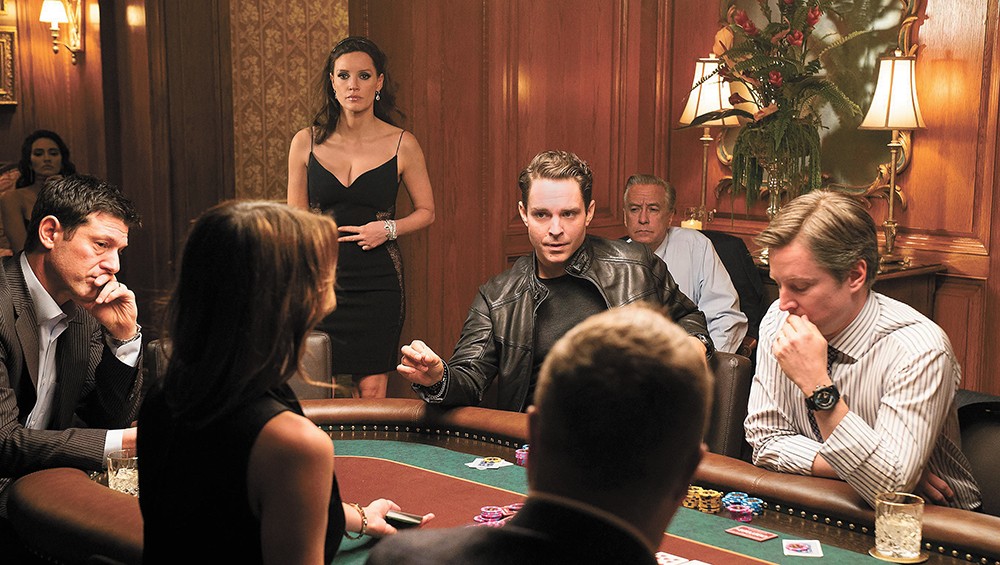 Go big or go home: Jessica Chastain is as good as she's ever been in Molly's Game, the latest from Aaron Sorkin.

I don't want to jinx it, but is it possible that Hollywood is warming u

p to the idea of flawed women as appropriate — even riotously entertaining — protagonists of their own stories? There's been a solid handful of really great examples of movies this year about women as fully human people, and 2017 is going out on a wonderful high note with the bold, tough Molly's Game.

This is all true stuff. Molly Bloom was a competitive skier on track for the 2002 Winter Olympics when a freak accident knocked her out of contention, and instead of heading to law school as she had planned, she took a break and moved to Los Angeles. By the end of the decade, she was running an exclusive underground high-stakes poker game favored by celebrity actors, rock stars, tech billionaires and finance dude-bros with money to burn.

All men, of course.

This may be a woman's story, but unless she's a cloistered nun, any woman is going to be dealing with a lot of men (and a lot of jerks). Bloom's story is all about how she plays a man's game — not poker, but their entitled masters-of-the-universe crap — with audacity and ambition but on her own terms, and by her own rules. Which includes a helluva lot more generosity and integrity than the men display.

As Bloom, Jessica Chastain is absolutely badass: cheerfully vulgar and solidly principled as she walks an endless tightrope of keeping these men happy so they keep coming back and keep tipping her lavishly (that's how she makes her money). Her Bloom is every woman who has ever clawed her way to success: overcoming insane obstacles and setbacks, being underestimated (or not estimated at all) by men who believe themselves her superior, and ultimately betrayed by them anyway.

There might not be much in the way of story here if Bloom didn't come under FBI scrutiny for, primarily, starting an even more exclusive poker game in New York that drew players from the Russian mob, which embroiled her in a corruption and money-laundering court case via those players. The film is structured as a series of flashbacks that jump around her past as she discusses her case with lawyer Charlie Jaffey (Idris Elba). There's a lot of rapid-fire snark and banter between them in a script by Aaron Sorkin, of Sports Night, The West Wing and The Newsroom TV fame.

This is Sorkin's debut as director as well, a feat he pulls off with aplomb: He has created a sort of visual equivalent of the whip-smart, fast-talking dialogue he is renowned for, barely letting us catch our breath as the film delves into the intricacies of, say, elaborate poker bluffs.

It makes for a film that gets you a bit giddy in a grand way, like a new Goodfellas but about a woman who, as her therapist father (a terrific Kevin Costner) notes, built a multimillion-dollar business on nothing but her wits, but who also succumbed to some of the inevitable pitfalls. Sorkin cleverly lashes up mystique and mythology in the same way that Bloom does, only to then smack it down with the harsh realities of her business. The mystery of Bloom's celebrity player X, for instance, whom she refuses to identify, soon twists into nastiness as he reveals himself to be a grade-A bastard. Michael Cera plays him as a loathsome villain who would be delicious if he weren't standing in for a real person.

Molly's Game is a cheerworthy portrait of an incredible woman, not because she's perfect or because she triumphs — neither is the case — but because she perseveres in the face of what grows to be seemingly insurmountable odds in a world in which expectations are not the same for her as for her male clients, and in which justice is too often nonexistent for those who transgress boundaries not of law but of culture.

The fact that Bloom is a real person is astonishing enough. That her story became this hugely engaging movie is something of a level beyond even that. I hope it is a harbinger of good things to come for women, from Hollywood and from reality. ♦

Molly's Game is not showing in any theaters in the area.